It was springtime in the desert in southern Arizona. Wildflowers were blooming among the cacti, butterflies were flitting about, and a roadrunner dashed by through the underbrush. On the rocky ridge to the north, peaks capped with snow poked into the clear blue sky.
In late February, I spent a week with friends in Tucson, Arizona. One day we did an excursion to the Tohono Chul botanical garden for a delicious outdoor lunch in the Garden Bistro, followed by a walk among the desert plants.
Tohono Chul, a garden, nature preserve and cultural museum, is located in Casas Adobes, a suburb of Tucson, Arizona. The words "tohono chul" translate as "desert corner" and are borrowed from the language of the Tohono O’odham, the indigenous people of southern Arizona.
In one part of the garden one can see a display of rock drawings and stone implements from that culture.
After a delicious lunch on the patio of the garden bistro, we purchased our tickets and set off on the trails through the garden, passing various types of cactus, succulents, desert adapted shrubs, wildflowers, and various sculptures.
As we stopped to admire some golden poppies, a docent pointed out some rare pink poppies she had discovered growing in a nearby exhibit.
We were a bit early in the season to see the cacti in bloom, but we found a number of barrel cacti covered in succulent fruit–one of them already nibbled by some hungry animal that had braved the sharp spines.
As we continued along the path we came to a fenced “kitchen garden” filled with beds of lettuce, broccoli, beets, onions, and a wide variety of other vegetables that thrive in Arizona’s mild winter climate.
The Tohono Chul garden is a pleasant walk among a wide variety of desert plants--some familiar and others a surprise. On our way out, a metallic hawk cast its eagle eye on our departure.
For directions, hours, and ticket prices, click HERE. 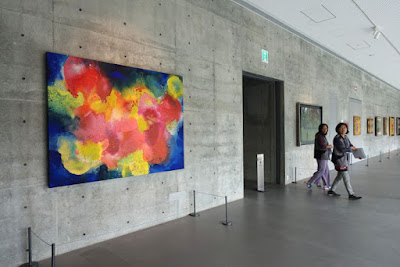 At Asia University, on the outskirts of Taichung, Taiwan, is the new Asia Museum of Modern Art, a striking steel and concrete building designed by Japanese architect Tadao Ando. Basing his design on an equilateral triangle, every part of the building reflects the triangle shape. During our recent trip to Taiwan, I was treated to a special tour of the museum.
Inside the building, a model of the building's unique design can be seen in the lobby.
Throughout the building the geometry is repeated with V-columns supporting the structural steel frame.
The museum features rotating temporary exhibits, and at the time of my visit last fall, it was the Language of Flowers, a theme chosen to coordinate with the 2018 World Flora Exposition held in Taichung.
The museum's goal is to display works from young Taiwanese artists and other artists from Asia, providing a global stage for contemporary works. For this exhibit, each room of the museum displayed diverse works of art that employ flowers as motifs.
Works on display ranged from paintings and drawings to sculpture and jewelry.
One whole room was devoted to the glittering jewelry of Taiwanese jewelry artist Aka Chen who “fuses oriental philosophy and crafting technology to eternalize beauty of natural objects with precious stones and breathe life into their presentation.” Flowers and butterflies are among his most popular subjects.
In another room of the museum, paintings and other objects reflected the bright colors and floral designs of the indigenous cultures of Taiwan.
The Language of Flowers exhibit was truly a garden of delights. My photos show just a tiny sample of the beautiful and creative pieces that were part of it.
For information about visiting the Asia Museum of Modern Art and other sites in the Taichung area, click HERE.
Posted by five nests at 8:00 AM No comments:

I never expected to find the giant jaws of megalodon, model ships, or the piano played Bernard O’Higgins, the founder of Chile, at a museum in a part of Chile otherwise known for its agriculture. It turns out that the Colchagua Museum, in Santa Cruz, Chile, is the largest private museum in Latin America and is packed with thousands of objects ranging from cowboy gear and weapons, to religious artifacts and pre-Columbian pottery and more. Founded by controversial tycoon Carlos Cardoen, the museum includes something for everybody.
We visited as a day trip from Rancagua (about an hour and a half away), where we were visiting our son-in-law’s family. As we drove to Santa Cruz from there we passed orchards, vineyards, and ranches that are the heart of  this verdant valley and one of Chile’s several wine growing regions.
After purchasing our tickets at the museum entrance, we watched a short video and then set off to view the exhibits, listening to our English language wands for key explanations in each room. As you make your way from the entrance you pass through rooms containing fossils and exhibits of the early history of world, and then move forward in time through archeology of Chile, Peru and Columbia, then to the period of the conquest by Spain, to national independence, influence of the church, and up through life in the nineteenth and twentieth century. The last rooms on the main level feature old carriages, cars and farm machinery. A recently added exhibit, The Great Rescue, honors the men who were trapped and rescued from a copper mine in northern Chile 2010.
Every room was filled with so many fascinating objects that it is impossible to describe them all. Here are some of my favorites.
We should have allowed more time to spend in the museum and to visit the associated Automobile Museum, located in a nearby vineyard, and the Chilean Craft Museum, located in a restored house in the nearby town of Lolol, featuring traditional crafts of Chile (stone carving, basket making, wood crafts, pottery, metals, naval and textiles.) As it was, after visiting the Colchagua Museum we took a walk through the center of Santa Cruz with its beautiful colonial era architecture around the main square and visited a few of the local shops before having ice cream at a favorite local restaurant. Someday we’ll have to go back to Santa Cruz to see the other museums and tour some of the vineyards.
For information about and directions to the Colchagua Museum, click HERE.

My friend Karen Minkowski is spending several months in Africa and sent me some of her wonderful photos taken on a trip to Hwange National Park in Zimbabwe. Karen and I were on the same memorable trip to East Africa in 1971 that I wrote about in my post on May 16, 2011. Karen has been back to Africa many times since then, both for work and for pleasure. I thank her for sharing her terrific photos and observations of African wildlife with The Intrepid Tourist.

Last week Karen reported on some of the many wild animals of Zimbabwe. Here is the second half of Karen's report about Hwange National Park and some of the many birds she saw and photographed there.

Birds were everywhere, calling and singing and displaying. 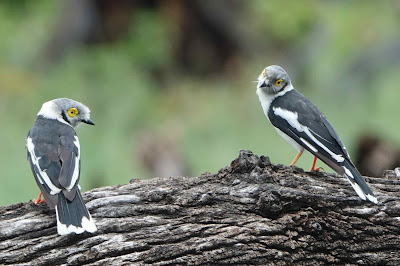 White-crested helmet-shrikes cock their heads as they search for invertebrates in the bark of a fallen tree. 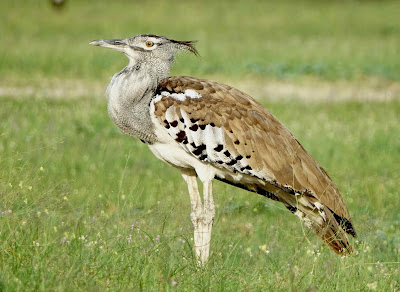 The Kori bustard is Africa's largest flying bird, but at about 40 pounds it does not often leave the ground. It hunts invertebrates, lizards, snakes and carrion, but also eats vegetable matter. 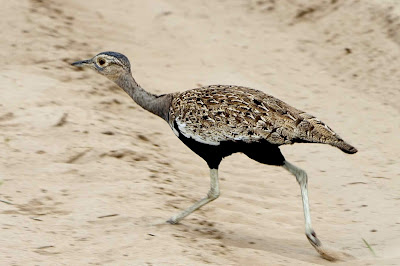 The male Red-crested Korhan can often be heard calling in preparation for his “suicide” display, an impressive aerial feat performed in hopes of securing a mate. The male suddenly flies up about 15-20 meters high, then stops flapping his wings and falls straight down as though he's been shot dead.  A couple meters above the ground, he spreads his wings and lands gracefully. While falling he is at risk of being grabbed by a raptor.
Our guide told us that the Korhan displays to show the female that he is willing to risk his life for his family and is thus worthy of fathering her chicks...An amazing performance (and too quick for me to photograph, but you can watch an 11 second video at https://www.youtube.com/watch?v=A2o_c_TClSI ) The red crest reportedly is erected only as part of attracting a female; displaying it at other times might attract a predator. 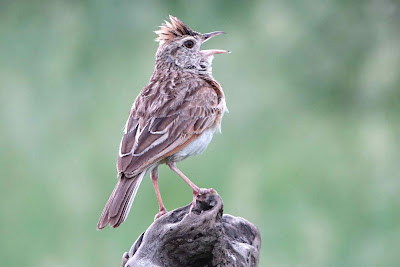 This little Rufous-naped Lark positions itself on a termite mound or thin dead stump, about 2 meters above ground, and belts out its beautiful call. We heard and saw them all along our game drives. 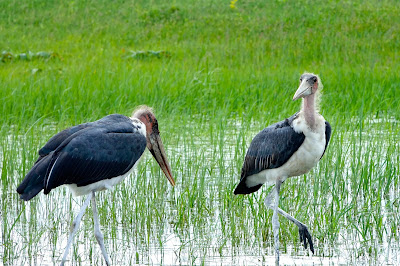 Maribou Storks, above, White-backed Vultures below...not the beauties of the bird world but they do a lot of the cleanup. 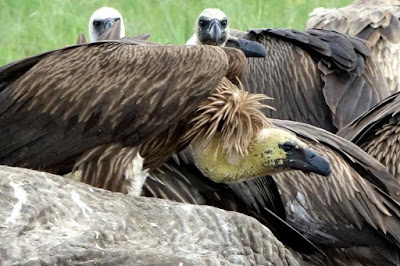 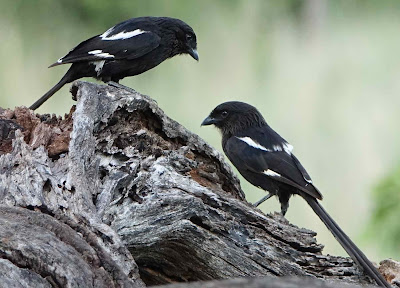 Here's a mother Magpie-shrike (aka long-tailed shrike) gazing lovingly at her offspring. Or perhaps it's the dad.


A few of the many raptors in Hwange National Park include the black-chested snake eagle, the dark chanting goshawk, and tawny eagle and more. 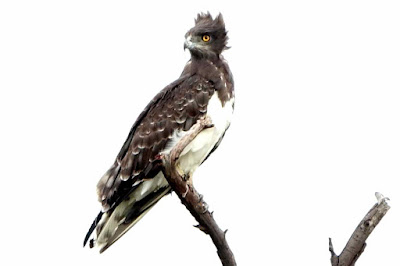 Here is a black-chested snake eagle perched on a branch. This bird feeds mostly on snakes, but will also prey on lizards, small mammals and frogs. 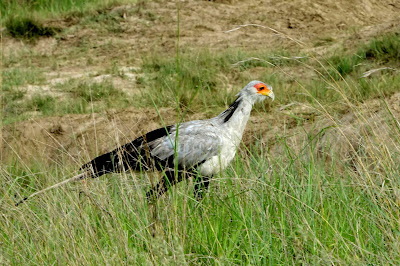 The Secretary bird is a ground raptor. When it raises the quill-like feathers at the back of the head it brings to mind an old-fashioned secretary with quills tucked behind his/her ear.

When I go to Hwange I am accustomed to joining a walking safari. I love this way of seeing wildlife, following the tracker as he picks up the spoor of a lion or rhino. There's nothing between me and the wildlife, and ... I get to walk. On this safari we viewed everything from a vehicle, but I did appreciate that we were able to approach birds and animals much closer without disturbing them, and we saw more wildlife.