My brother Tom recently revisited a favorite family vacation spot from when we were growing up. His report of his hike to Hidden Lake in Glacier National Park is below. For more about our original trip, including excerpts from my vacation diary, go to my post for 10/22/12.
A few weeks ago I returned to my favorite national park, Glacier, located in the northwest corner of Montana. In August 1961, when I was eleven, my family went on a camping trip to Glacier and one of our activities was a hike to Hidden Lake at the top of Logan Pass. 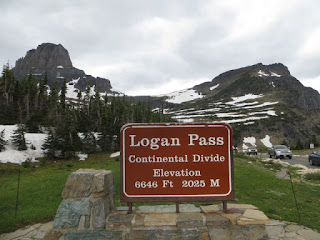 I wanted to do the same hike now fifty-five years later. The alpine beauty is as stunning as it was and seemed unchanged. This time I had to hike over snow most of the way as I climbed up to the lake. I saw mountain goats just as I had when I was eleven, and was still as excited as ever to see them.

Many of the goats now have radio collars because they are being studied to see how far they range in their habitat. I also saw marmots along the path. After a mile and a half hike I reached the same overlook of Hidden Lake where my father took one of our favorite photos (a slide) many years ago.


Returning to Logan Pass was an easy downhill slide over the snowfields. At the pass the classic red Glacier Park buses were now arriving with busloads of hikers.
For high alpine scenery, Glacier National Park can’t be beat and even though it is a bit off the beaten track, I highly recommend visiting this jewel in our national park system.

I’ve walked the Santa Monica Pier many times but never, until this summer when my grandchildren came to visit, spent any time at the Pacific Fun Park or visited the Aquarium under the pier. So, we planned an afternoon’s excursion and, instead of driving to Santa Monica, as we usually do, we decided to ride the new Expo Line train, getting on at the Palms Station not far from our house in West Los Angeles. The end of the line is just two short blocks from the pier.
The Santa Monica Pier extends into the Pacific Ocean at the end of Santa Monica Boulevard and is an iconic southern California landmark dating back to the days when Los Angeles residents closer to downtown came to the beach for summer outings. It has always had a holiday atmosphere. http://santamonicapier.org/history/
Santa Monica is the terminus of historic Route 66, the U.S. highway that begins in Chicago on Michigan Avenue and winds its way westward to the California coast.
Our first stop on the pier was the carousel, whose history dates back to 1974 and is famous for its individually carved wooden horses.
We then went down the stairs outside the carousel to the entrance to the Aquarium. Children get in free and I was willing to pay five dollars to support Heal the Bay, a sponsor of the Aquarium. Inside, children were clustered around the touch and feel tank with its starfish and other tidepool creatures. There is also a large tank with a kelp bed display, a jellyfish tank and other exhibits.
But the highlight of the afternoon for the kids (ages 10, 12 and 14) was the Pacific Fun Park where they rode the ferris wheel, scrambler, and dragon while Art and I stayed safely on the ground and took pictures.
At the far end of the pier, fishermen dropped their lines over the side in hopes of catching a fish. But most people on the pier were there just enjoying the ocean breeze and view of the beach that stretches on one side all the way to Malibu and on the other, south to the Marina. We saved our beach fun for next day, when we donned our swimming gear and the kids boogie boarded in the waves.
Posted by five nests at 9:00 AM No comments:

Ever since I studied Latin in high school, I have been intrigued by ancient Roman culture. The Getty Villa in Malibu brings back fond memories of the scale model of a Roman villa that I once made as an extra credit project in ninth grade. Just like the Getty Villa, my model had colonnades or peristyles, reflecting pools, and atria with doorways opening into adjacent rooms and workshops, which I filled with tiny furniture and tools. The difference is that at the Getty Villa the rooms have been organized into 23 galleries filled with over 1,200 pieces of amazing Roman and Greek antiquities ranging from life-size marble statues, painted pottery and glass, to jewelry, mosaics, ancient tools and more. Organized thematically, they help one imagine what life was like two millennia ago.
Earlier this summer I visited the Getty Villa with my family. (I had gotten tickets–which are free–ahead of time at the Getty site on the web.) As we entered at the parking level, a docent recommended that we enter the museum through the herb garden (filled with meticulously cared for herbs, vegetables, and fruit trees) and then watch the short introductory video before touring the galleries.
The video gives an overview of J. Paul Getty, his art collection, and the building of the villa. As my granddaughter explained, “Getty built the museum because he had so much art that it didn’t fit in his house any more.” (In the early days, Getty opened his home a few days a week for visitors to view his art.) Even after the villa opened as a museum in 1974, there was still not enough room for Getty’s growing collection, which included not only antiquities, but paintings, furniture and other art. Many of these are now on view at the Getty Center in Brentwood. The Getty Villa is dedicated to the arts and cultures of ancient Greece, Rome and Etruria.

We started our visit in the room with paintings and sculptures of Roman and Greek gods and goddesses. I learned that Dionysos (Greek) or Bacchus (Roman) played an important role in many aspects of life. We then proceeded to rooms displaying mythological heroes, women and children, men in antiquity and more. In the center of one room is an over-life-size statue Getty bought in 1985.  Known as a type of statue called a kouros, it depicts a standing nude youth and is intended to represent the idea of youth. Despite detailed analysis, its history remains a mystery. 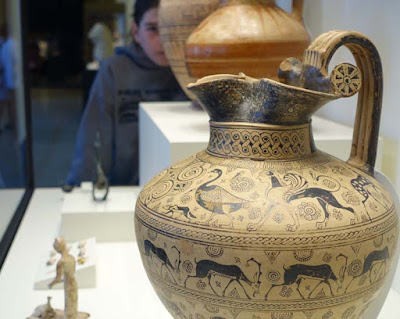 My favorite gallery was the one that depicted animals including elaborately carved marble bears and vases with delicately drawn birds and beasts.


We had a delicious lunch in the museum Café, sitting outside on the deck with a view of the museum and adjacent hills. Afterward, we browsed in the excellent gift shop below.

No matter where we looked, every detail of the Villa was carefully planned--from the designs painted on walls and ceilings, to the marble floors, garden alcoves and placement of windows that framed views of the gardens. Nestled in a canyon in the hills above the Pacific coast, the Villa has a spectacular view of the Pacific Ocean.


With a landscape and climate not unlike that of Italy, the Getty Villa is a place where one can imagine, if just for a moment, time traveling to an ancient world.

On a recent visit to Philadelphia, I discovered a long colorful wall facing the row houses along the narrow street where my friend lives. Decorated with thousands of ceramic tiles and pieces of mirrors, the designs swirled across the surface, brightening what would otherwise be a plain, narrow alley. I found out that the mural was one of hundreds of public art installations created by mosaic artist Isaiah Zagar.
The next day I headed to Philadelphia’s Magic Gardens, the massive art project originally created by Isaiah Zagar on several vacant lots along South Street. Begun in 1994, Zagar  built walls and passageways and decorated them with found objects such as folk art statues, bicycle wheels, colorful glass bottles, hand-made tiles, and thousands of mirror fragments.
In 2002, when the owner of the land decided to sell it and dismantle the art, the community rallied to save it. After a two year legal battle, Zagar’s art became incorporated as a nonprofit organization. The Magic Gardens are now open to the public and are the heart of a community art center.
As I walked through the gallery and open air “rooms” it was impossible to know where to start taking pictures because the art was everywhere–on walls, in nooks and crannies, down stairways to sunken patios, behind plants, and completely covering the wall of the adjacent building. Every square inch was covered with some kind of object. Many of the tiles incorporated words, letters or poetry.
Numerous other installations of Zagar’s work can be found in the immediate neighborhood–on walls, around doorways, down narrow passageways, on decks and terraces. On Saturdays and Sundays one can take guided tours. Or, if you want to tour the neighborhood on your own, as I did, you can follow the map on the Magic Garden website.
With their rich surfaces and use of found objects, Zagar’s art installations brought to mind the work of Antoni Gaudi in Barcelona and Simon Rodia’s Watts Towers in Los Angeles. But what struck me most about Zagar’s work was how well it is incorporated into city life, available to people as they go about their daily business and in doing so making their lives and their community richer.
As I walked along South Street, I continued to be amazed.

Admission to the Magic Gardens is $10 for adults, $8 for Students with ID, Military and Seniors, $5 for ages 6-12 and FREE for children 5 and under
Click HERE for directions to Philadelphia's Magic Gardens.