My friend Karen Minkowski is spending several months in Africa and sent me some of her wonderful photos taken on her morning bird walks. Karen and I were on the same memorable trip to East Africa in 1971 that I wrote about in my post on May 16, 2011. Karen has been back to Africa many times since then, both for work and for pleasure. I thank her for sharing her terrific photos and observations of African wildlife with The Intrepid Tourist. Here is the second part of her post on the birds of Zimbabwe.


Early each morning I walked along the road observing and photographing birds. The abundance, diversity and beauty of Zimbabwe's birds were a continual source of enjoyment for me. The beautiful Red-headed Weaver, seen above, builds its nests in smaller colonies than does the Southern Masked Weaver I wrote about in last week's post. 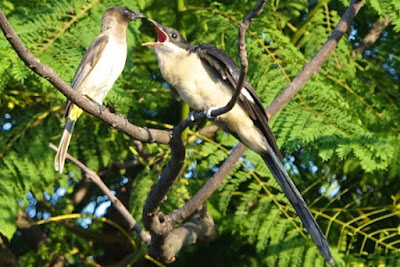 Some of the most intriguing interactions I witnessed were between two different species. Here, a fledgling Jacobin Cuckoo begs for food from its host parent, a Dark Capped (Common) Bulbul. 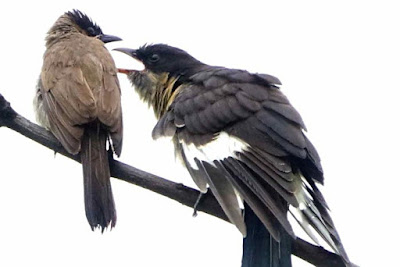 Cuckoos are brood parasites that lay their eggs in the nests of other species who (for the most part) accept the egg and expend their time and energy rearing the parasites' young, often along with their own. The cuckoos' strategy demands close cooperation between male and female. Together they quietly approach a potential host nest. The male cuckoo starts calling to distract the host. Eventually he perches just above the nest, taunting the host. When the host leaves the nest to attack the intrusive male, the female cuckoo moves in and lays her egg. Then the cuckoo pair flies off, leaving their genetic legacy to the (hopefully) good parenting skills of the host. 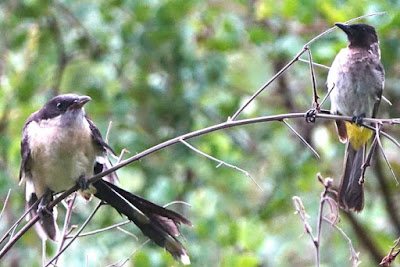 Five days later I saw the young cuckoo again with its host parent. It looked to me like the cuckoo had grown and was now using its size and and perhaps aggressive nature to bully the bulbul. The cuckoo would relentlessly thrust its bill at the host parent, until it would finally fly off in search of another meal. At other times the host parent, probably by now exhausted, appeared to resist: a standoff.
Whenever the cuckoo finished eating what the bulbul had brought to it, the bullying began again. 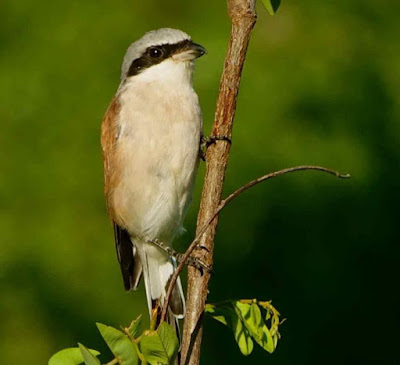 Often I used my photos, like this one of the Red-backed Shrike, to identify a bird with my app once I was back home. 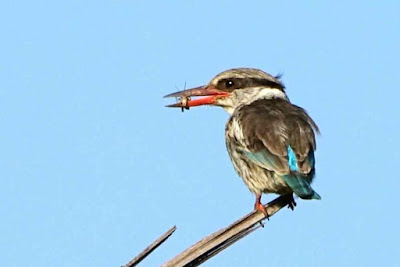 Striped Kingfisher with an insect in its bill. Many kingfishers feed on insects, reptiles, and frogs, even small mammals, either exclusively or more frequently than on fish and other aquatic creatures. 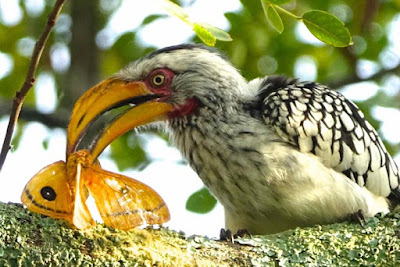 When I photographed this Yellow-billed Hornbill I thought it was eating a flower. Enlarging the image revealed that it was actually a moth. 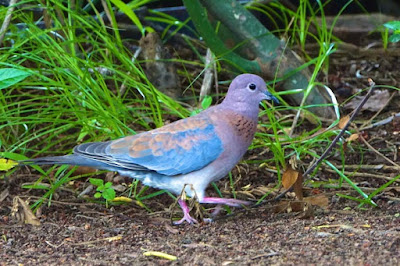 The Laughing Dove is distinguished by its blue wings. 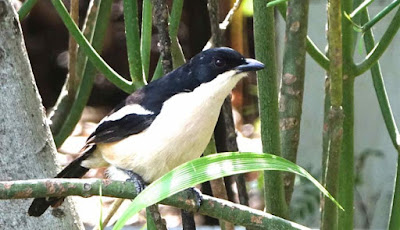 The Tropical Boubou's call is lovely, haunting. I only saw it making that sound once, or I would have forever been mystified. When the bird was foraging low in the foliage or on the ground for insects, I could often see that it was uttering a completely different call, hoarser, and more coarse.

By eight a.m., the sun was burning away the cool, fresh morning air and I headed home, eager to rehydrate, look at my new photos, and identify new bird sightings.

My friend Karen Minkowski is spending several months in Africa and sent me some of her wonderful photos taken on her morning bird walks. Karen and I were on the same memorable trip to East Africa in 1971 that I wrote about in my post on May 16, 2011. Karen has been back to Africa many times since then, both for work and for pleasure. I thank her for sharing her terrific photos and observations of African wildlife with The Intrepid Tourist.

For six weeks I lived in Dete, a small town of about 3,000 people in western Zimbabwe on the border of Hwange National Park, while I was volunteering for a foundation that works with local communities. A dirt road separated my house from the bush and the nearby national park boundary. Early each morning I walked along the road observing and photographing birds. The abundance, diversity and beauty of Zimbabwe's birds were a continual source of enjoyment for me. Here are some that I managed to capture with my camera. 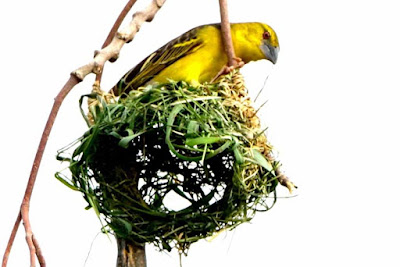 A female Southern Masked Weaver is inspecting a nest that appears to be undergoing repairs, as suggested by the juxtaposition of old and new grasses. The male builds the nest, and if the female accepts it she'll line the inside with soft plant materials. Like many weaver species, this one also nests in colonies. 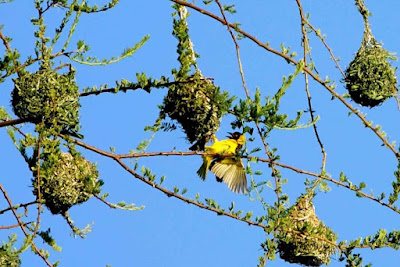 The birds chatter away as they prepare their nests. Each bird extracts a single blade of grass from the surrounding bush or gardens and then flies back to the colony to weave it into the nest. Taking a break to feed, small flocks of Southern-masked Weavers gorge on grass seeds or forage for insects. 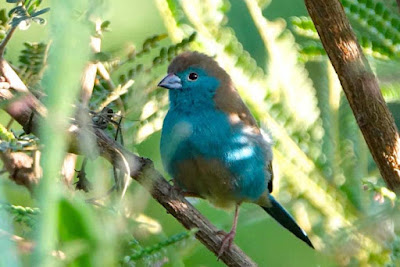 The Blue Wax Bill's small size and habit of flitting quickly in and out of bushes made it difficult for me to get a photo. I finally resorted to continuous burst shooting in hopes that one of many images might come out in focus and with the bird acceptably posed. 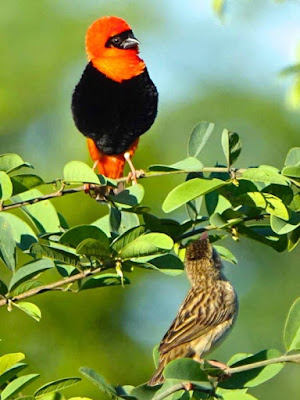 This is the stunning, yet somehow oddly put-together Southern Red Bishop in full breeding regalia. He looks to me as though he'd donned a red head scarf and then casually tossed the end around his neck before showing up at his display site. Perched below him is his rather drab-colored (potential) mate.
I loved watching birds interacting. Sometimes an encounter lasted just long enough for one bird to land and another, nearby, to fly off, clearly ceding space to the first; at other times a prolonged interchange would occur. 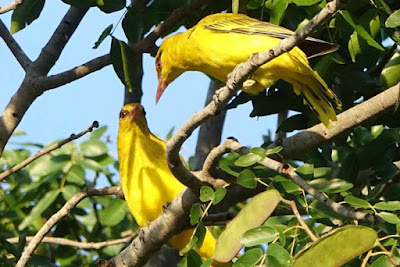 These two African Golden Orioles faced each other while one chirped at the other. Then they would separate, likely foraging for insects, but never more than a couple meters away. Then they came close together again, with more chirping, and again separated. I couldn't tell if they were mates or a parent and offspring. After a few minutes one flew off to another tree, and the bird remaining behind suddenly changed its call from chirping to a lovely warble. Soon it, too, left the tree and both flew out of my sight. 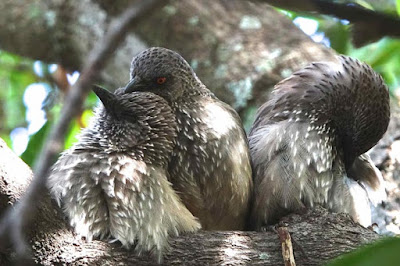 Late one afternoon, I photographed these Arrow-marked Babblers through my open bedroom window as they huddled together and engaged in mutual and self-preening. They forage in small groups of 9-12 and babble as they move through the lower strata of vegetation and on the ground. The babbling probably serves to keep the group together. 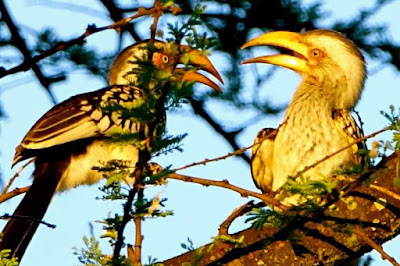 Quite a bit of commotion - movement and noisy vocalization - attracted my attention to these two very animated Southern Yellow-billed Hornbills. 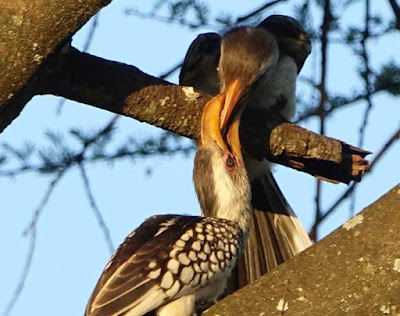 Eventually one, I assume a parent, fed its hungry, insistent young.

Look for Part 2 of BIRDS OF ZIMBABWE next week.
Posted by five nests at 8:00 AM No comments: