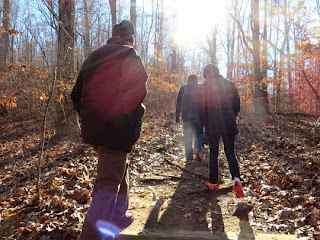 A year ago in November we traveled to North Carolina to spend the Thanksgiving holiday with our family in Chapel Hill.  On Thanksgiving day, the weather was crisp and clear, and while the turkey was cooking we decided to get some exercise and went for a walk along the Piedmont nature trails at the North Carolina Botanical Garden. Following the marked trails through the forest, we took a circular route, crossing the Meeting-of-the-Waters Creek twice.  Although most of the leaves had already fallen, a few hardy remainders glowed in the afternoon sunlight. 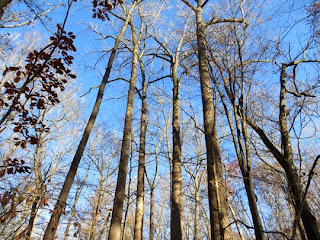 A diversity of hardwood and evergreen trees, shrubs, and woodland wildflowers thrive in these woods. Interpretive brochures and a trail map are available at the entrance to the trail. The trail walk can take from 15 to 45 minutes or more, depending upon the path taken and your pace. We spent about an hour and went home with a healthy appetite for a delicious meal. For a trail map click here. 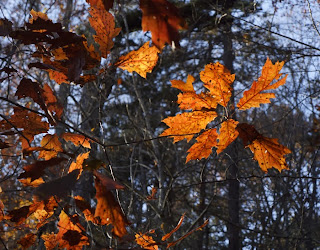 The Piedmont Nature Trails are open to the public every day of the year. 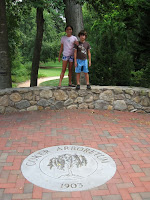 On a recent trip to Washington, DC, I spent the morning at the National Gallery of Art, focusing on two of the current special exhibits, Degas’ Little Dancer Aged Fourteen, and a show of Andrew Wyeth paintings and drawings.  I have seen the Little Dancer by Degas several times before–in Paris, at the Norton Simon Museum in Pasadena, and in another exhibit at the National Gallery–but they were all casts made after his death.  In this exhibit at the National Gallery is Degas’ original wax sculpture of the Little Dancer from which the casts were made so for the first time I could see how the surface was modeled.  The figure is made of wax over a metal armature to which the artist added wood, rope, and even old paintbrushes in the arms.  Then a wig of human hair was added as well as a cotton-and-silk tutu, a cotton faille bodice, and linen slippers. Her turned out toes, erect posture and raised chin seem to convey an inner determination. Little Dancer Aged Fourteen will be on view from October 5, 2014 to January 11, 2015.
The Little Dancer was first exhibited in 1881 in Paris with other Impressionist works.  Fittingly, her surroundings at the National Gallery are paintings and drawings of other dancers by Degas, as well as works by other Impressionist and Post-Impressionist artists including Monet, Renoir, Van Gogh, and Cezanne. Many of the paintings are familiar from my art history classes but there were also some new ones such as Van Gogh's Green Wheat Fields, recently acquired by the museum. Van Gogh's characteristic layered brushstrokes pulsate across the surface of the painting.
Another featured exhibit currently at the National Gallery is Andrew Wyeth: Looking Out, Looking In, which shows one of Wyeth’s  most famous paintings Wind from the Sea and explores his lifelong fascination with windows, a subject he depicted in more than three hundred works. Wyeth’s ability to paint the same subject over and over, each time seeing it in a new light and giving it new life is one of the pleasures of this exhibit.  Photographs were not allowed.  It will be on view until November 30, 2014.
On our way to the two exhibits we passed many rooms of art that we didn’t have time to stop and view. The National Gallery is huge and impossible to see in one day. Our visit only encompassed the West Wing.  The East Wing galleries are currently closed for renovation.  On another trip we’ll go back to see more.

Once there were billions.  Now there are none. One hundred and fifty years ago gigantic flocks of passenger pigeons blackened the skies of North America. However, due to indiscriminate hunting and habitat destruction, the flocks rapidly diminished, and by 1914 only one passenger pigeon remained alive. She was known as “Martha” and lived in the Cincinnati Zoo.  When she died one hundred years ago, the species became extinct.
Martha’s body was sent to the Smithsonian Museum in Washington, DC, where she was preserved and put in the research collection. She has been off of public view since the 1960's, but in this centenary of her demise, she is once again on view and is the center of a special exhibit, Once There Were Billions: Vanished Birds of North America. 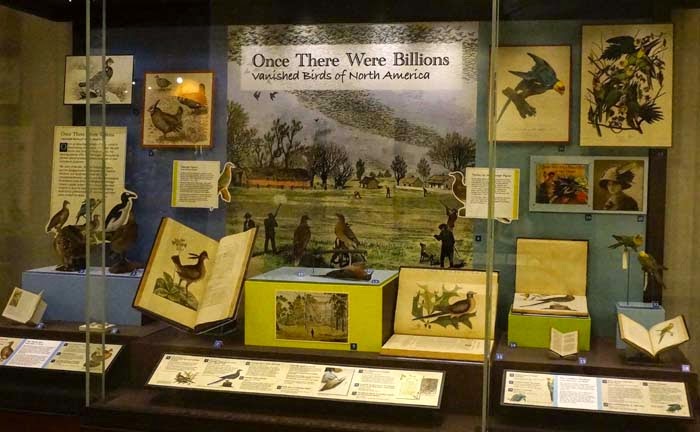 Recently, I had a chance to visit the Natural History Museum and see Martha for myself, along with other now extinct birds including the Carolina Parakeet, Great Auk and the Heath Hen.  Martha is displayed with several other passenger pigeons from the museum collection and with historic illustrations from the archives of the Smithsonian library. Distinctive features of the passenger pigeon are warm pink breast feathers and soft grey feathers on the back and wings. (Passenger pigeons are related to another native American species, the band-tailed pigeon-- not the ubiquitous pigeons that inhabit our towns and cities, a non-native species imported from Europe.) 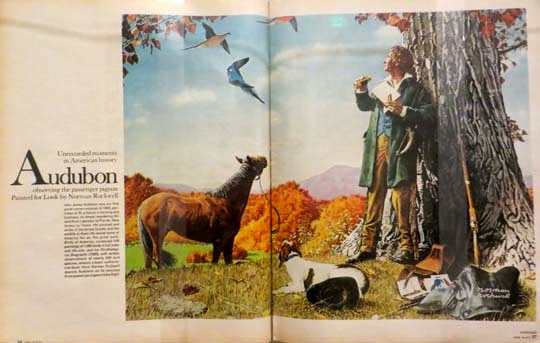 The passenger pigeon was among the many birds painted by John James Audubon for his book The Birds of America. In 1940, Norman Rockwell painted a picture for Look Magazine depicting a scene of Audubon observing passenger pigeons in flight.
The Smithsonian’s Great Auk is one of about 80 museum specimens. Living in large colonies along North Atlantic shores, the birds were easily slaughtered for their meat, eggs, feathers, and oil.  They were extinct by the mid-1800's.
In colonial times, Heath Hens flourished from Maine to Virginia, but they were tasty and easy to kill and their numbers quickly declined. The last heath hen, living in a sanctuary on Martha’s Vineyard, died in 1932.
Carolina Parakeets, prized as decorations for ladies’ hats, became extinct in the wild by 1904; the last one died in captivity in 1918.

The story of the last Passenger Pigeon and the disappearance of the Great Auk, Carolina Parakeet and Heath Hen, illustrate the fragile connections between species and their environment.  This exhibit reminds us all that we need to pay attention to the natural world and the complex connections of all the living things in it.

Note: Audubon Magazine featured the story of the Passenger Pigeon in its June 2014 issue, which included a pull-out origami Passenger Pigeon and link to a website “Fold the Flock” designed to create awareness of the Passenger Pigeon's plight as the folded birds are added to the virtual flock.  For more, click HERE to see my post at my Caroline Arnold Art and Books blog.
Posted by five nests at 9:00 AM No comments:

Recently, on a trip to Santa Barbara, California, I decided to go to the zoo where I had not been for a long time. I stopped first at the large sundial on a plaza near the zoo entrance and stood on the marker for the month.  My shadow told me that it was 4:00–exactly the time on my watch! It was a great time to visit–the zoo was not crowded and the animals were up and about.

I then proceeded to the flamingo display, always a favorite, and watched these elegant and beautifully feathered birds. (They were Chilean flamingos, a species I had seen in the wild with my family on our trip to Patagonia in 1995.) After I left the flamingos and was walking down the trail to the next exhibit, I suddenly realized I was being followed.  I turned around and saw a group of flamingos (and their keepers) coming down the path!  I asked, and learned that the flamingos go out for a walk every day to get their exercise.

I took a circular path around the zoo past capybaras, some lively tamarin monkeys, and other animals, until I came to a sign that said “Giraffe Deck”. There I saw a group of children, under the supervision of a keeper, feeding treats to a very friendly giraffe.  As the giraffe stuck out its long blue tongue to grab the treats, the kids squealed with delight. (The cost for giraffe feeding is $6 or $5 for zoo members.) I learned from the sign that the blue color of the tongue is an adaptation that helps keep the tongue from becoming sunburned as giraffes feed in the wild.
I then walked along the California Trails, which includes exhibits of a Channel Island fox, desert tortoises, and other animals native to the state.  I looked up and saw three condors sitting on their perches in their huge flight cage enjoying the afternoon sun. The Santa Barbara Zoo is one of only four zoos in the world to display California condors, along with Condor Ridge at the San Diego Wild Animal Park, Elephant Odyssey at the San Diego Zoo, and the Chapultepec Zoo in Mexico City. I have seen wild condors in the California mountains and along the Big Sur coast, but never this close up.  A distinguishing feature both in the wild and at the zoo are the large numbered tags on the birds’ wings. There are so few of these birds left, that each one has an identifying number. I learned about condors and their extreme plight when I researched and wrote my book On The Brink of Extinction: The California Condor.  No other bird in North America has a wingspan as wide as a condor’s–a spread of more than nine feet from tip to tip.
The Santa Barbara Zoo is a relatively small zoo, but well worth a visit.  Its impeccably landscaped trails and large, well designed exhibits make it a perfect place for an afternoon walk or for a longer visit, with or without children.  As the attendant at the ticket booth says when you come to the zoo: “Have a Zooper Day!”