My friend and fellow children’s book author Caroline Hatton visited Upper and Lower Antelope Canyon in October 2019. She took all but one of the photos in this post. For more information about her, visit www.carolinehattonauthor.com.

In an earlier guest post by Owen Floody about both canyons, photos show how Upper Antelope Canyon was lit on his visit in September. Because the time of year and time of day determine how high the sun is, and therefore how much or how little light penetrates the canyons, the purpose of this post is to compare the two canyons in the first week of October. All visitors are now required to join a guided tour, so I reserved tickets online in advance, for the following dates and times:
- Upper Antelope Canyon: Saturday, October 5, 10:15 a.m. tour
- Lower Antelope Canyon: Friday, October 4, 10:45 a.m. tour
The weather was clear and sunny on both days.
The Upper Antelope Canyon tour began with a military-style truck ride from the parking lot to the canyon entrance. The tour is a round trip, walking into the canyon to the end, turning around, and walking back out, with tight traffic control: staying on the right, stopping completely to allow photo-tour guides to line up their photographers to all take a photo with fewer tourists and less suspended dust, and otherwise moving along to prevent traffic jams.

The Lower Antelope Canyon tour began at the parking lot. The tour goes in one direction, from one end of the canyon to the other. The number of people around me was five to ten times less than in the Upper Canyon tour, because fewer people visit the Lower Canyon and because the floor is narrower in the Lower than the Upper Canyon, often allowing only one person at a time to go through.

In both tours, the guide for my group offered help setting cell phone cameras to “vivid colors.” Digital camera users switched to a higher ISO value. Along the walk, the guide offered to take the photos of the famous, nicknamed, rock formations and patterns, on behalf of visitors, by using their phones and cameras, one after the other, as well as to take portraits of couples and families posed by themselves against attractive backgrounds.
The Upper Antelope Canyon is A-shaped. The narrow top allows no sun rays into the canyon, except in a few wider spots, but only on the very top of the rock wall, more than 100 feet (~30 m) above my head. The wide, flat, sandy bottom was easy to walk on, even in the near-pitch darkness. Guides reminded some visitors, who used flashlights to see where they were going, to keep those off, to avoid ruining everyone else’s photos. Indeed, everyone’s camera-setting-enhanced photos made the canyon look brighter, more colorful, and simply more visible than the dim, colorless reality.

The Lower Antelope Canyon is V-shaped. The wide top lets the sun shine on the rock walls. At the entrance, the five flights of stairs going down were of the industrial, metal-grid type. The canyon bottom narrowed here and there to an actual rock V, where the left and right walls met at an acute angle with no flat spot to put a foot down. Photos showed rocks as seen with the naked eye, like melted, stretched, brightly colored candy. Visiting was quieter and more leisurely in the Lower than the Upper Canyon. I would do it again, especially in a different season!

THE VIRTUAL TOURIST: Celebrating 9 Years of The Intrepid Tourist--In My Own Neighborhood

The world as we know it has been forever changed by the Corona pandemic. For now, all travel is essentially cancelled, thus making The Intrepid Tourist more theoretical than actual. So, while we all shelter in place, it is an opportunity to be virtual tourists, remembering favorite trips in the past, dreaming about places we might like to visit some day, and seeing our own neighborhoods anew.
This week is the 9th anniversary of the launch of The Intrepid Tourist in April 2011. Since then I have posted a new article once a week (usually on Monday), now totaling more than 400 posts and more than 300,000 page views. I am gratified to have found an audience that is enjoying the articles, both mine and those by friends and family.  I especially thank all the guest posters who have widened the scope of the blog, often reporting on places I have never been, whetting my appetite for future travel and providing their unique point of view.
I hope that it won’t be too long before all of us can enjoy traveling again. Meanwhile, Art and I remain at home, except for a daily walk around our West Los Angeles neighborhood. We try to vary our route each day. Just changing the side of the street, direction, or time of day often brings surprises.
A week or so ago we began to notice small colored rocks appearing in nooks and crannies along the sidewalk. Like oddly shaped Easter eggs, they were mysterious hidden treasures. Some had messages, others were simply painted with designs.
Then, in the Easter Sunday edition of the LA Times, a front page article described a similar phenomenon going on in other communities. The headline read “They’re rock-solid in a crisis.” The author told about a group of children in Santa Clarita, inspired by a local artist, who found rock painting a welcome activity during all the hours they must now spend at home.
I don’t know who is creating the painted rocks and sidewalk art in my neighborhood, but they are tokens of cheer that brighten my day and help me stay sane as I weather the pandemic. 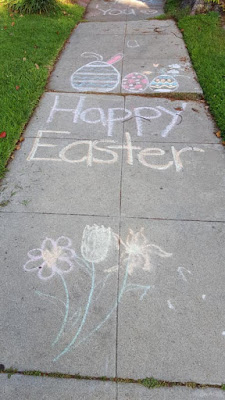 UNDER THE GOLDEN GATE BRIDGE and A WALK IN THE REDWOODS: Marin County, CA

If there is one image that symbolizes San Francisco it is the Golden Gate Bridge, the soaring metal structure that connects the city with Marin County to the north. During the recent Christmas holidays, which we celebrated in Oakland, we had a guest who had never been to California. The Golden Gate Bridge was a must-see on our list of things to show her.
So, on a bright sunny day, we headed across the Richmond Bridge from the East Bay to Marin County, where we planned to hike to the north end of the bridge. In Sausalito we took the road to Fort Baker and parked at the end of the road near the fishing pier. Although there were quite a few fishermen, we didn’t see anyone actually catch a fish.
We then proceeded on foot along the path as it wound its way under the bridge and up the hillside to the visitor area on the west side of the bridge. It took us about fifteen minutes to get to the top. 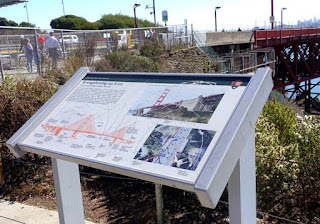 There a series of information signs explain how the bridge was built. On a previous visit with another guest, an engineer, this was his favorite part of our excursion to the bridge.
A fenced walkway under the bridge allows pedestrians to cross from one side of the roadway to the other. As we walked under the road we could hear and feel the roar and vibration of the traffic above us as we got a close-up of the giant steel beams that support the bridge.
The visitor area on the east side, called Vista Point,  provides spectacular views–of the bridge, the city, and surrounding San Francisco Bay. In the middle of the parking area stands a large monument–the Lone Sailor Memorial, honoring the people who serve in the Navy, Merchant Marine, Coast Guard and Marine Corps.
After admiring the view along with dozens of other tourists and taking numerous photos, we retraced our steps back to our car at Fort Baker. We had brought a picnic lunch which we ate at one of the picnic tables along the road into the fort.
Our next stop was to another classic tourist sight for visitors to California–the giant redwoods. We didn’t have time to go to Muir Woods, the national park famous for its trees, even though it was just a short drive away. Instead, we went to Mill Park in the nearby town of Mill Valley, where a beautiful redwood grove is a city park next to the public library.
My parents lived in Mill Valley for thirty-seven years and although I never lived there  I often visited, so, for me, this trip to the redwoods and the Golden Gate  Bridge brought back many memories.
For the final event of our day’s outing, we stopped for coffee at a shop in downtown Mill Valley. Then we headed back to Oakland as the winter sun set beyond the Golden Gate on the other side of the Bay.