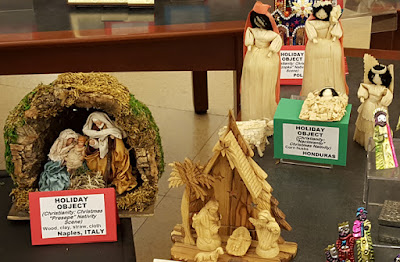 Nativities from around the world displayed in the Connecting Cultures Mobile Museum remind me of our own collection, gathered over the years, often as we have traveled around the world. As we celebrate this holiday season with its message of joy, hope, peace and goodwill, we send best wishes to all of you for a very
HAPPY HOLIDAY
and
JOYOUS NEW YEAR!

SYDNEY, AUSTRALIA:: A Walking Tour of the CBD

I recently spent two weeks in Australia, beginning with three days in Sydney. Our hotel was in the CBD (Central Business District) near Chinatown, not far from many of the places I wanted to see.
So, while my husband was attending his conference, I took myself on a self-guided walking tour.  I headed first for Hyde Park, anchored on one end by the War Memorial and the other by a large fountain bordered by a plaza where a bubble-man was surrounded by children as he created streams of giant bubbles. In one of the trees along the path I spotted a possum curled up in a hole taking a nap--possums, like many Australian animals, are nocturnal.
On the other side of the park was the Australian Museum (subject of a future post on this blog) and a view over the Botanical Garden. I then walked down George Street, in some ways the equivalent of 5th Avenue in New York, with crowds of people making their way to upscale stores and arcaded shopping malls. Since many of the buildings in the CBD are apartments where people live, I wondered where they went shopping for food. Then I spotted a sign for Coles, a large supermarket, with a stairway down to the store below street level. Further down the street I stopped in Dymocks bookstore, packed with Christmas shoppers. It had a huge selection of children's books on the lower floor and I enjoyed browsing, especially books by Australian writers. It also had a large display of books by English author Enid Blyton, whose books had been among my favorites when I was a child.
From there I made my way to The Rocks, site of Sydney's origins and earliest history of European settlement. The museum details aboriginal life in the area and its ancient history.
The Rocks are a mixture of historic buildings on cobblestone streets and modern high rise buildings.
From The Rocks is a spectacular view of the Sydney Opera House on the other side of the harbor. As I walked along the esplanade I found myself underneath the massive Harbor Bridge.
Then I headed back to my hotel, not far from the Chinese Friendship Garden. By no means did I cover all the sights of Sydney, but my tour gave me a good taste of the flavor of the city.

The white “sails” of the Sydney Opera House, soar over the entrance to the harbor and are the iconic image of Sydney, the largest city of Australia. Like a giant, earthbound ship, they greet boats entering the harbor and provide a focus for visitors.
We arrived in Sydney in early December (the beginning of Australian summer), and despite our jet lag after the 15 hour flight from Los Angeles, decided that going to the Opera House to view the sunset was the perfect way to start our trip. The plaza below the Opera House was filled with people taking pictures and enjoying the view while partaking of food and drinks from the tented concessions that lined the lower level.
To the west, we watched the sun sink behind the towering skyscrapers that dominate the modern city of Sydney, while across the bay, dramatic clouds filled the sky over the bridge, another famous Sydney image. Along the top of the span, tiny figures were silhouetted against the sky as they climbed to the top. (This is a popular tourist activity–but not for one for me.)
The Opera House was designed by Danish architect Jørn Utzon, winner of an international competition in 1957 to design a ‘national opera house’ for Sydney’s Bennelong Point. His vision for a sculptural, curved building on the harbor was unique and broke radically with the cube and rectangular shapes of modernist architecture up to that time.
The grand opening was in October 1973. As we circled the point to view the opera house from another angle, we encountered a Canadian tourist who told us that he had been at the very first opera performance in 1973. Soon after the sun set, many of the people who had been lingering on the plaza streamed inside for that evening’s program.
Meanwhile, we watched the moon rise to the east and waited for dark and the light show, Badu Gili, to begin at the top of the Monumental Steps. Badu Gili, meaning “water light” in Gadigal language, explores ancient stories in a seven-minute video projection of colorful images derived from the traditions of the local aboriginal people.

From birds to sea creatures, people to abstract designs, the brilliant images moved across the curved surfaces like giant kaliedescope designs. They were spectacular. (Click above to see a 24 second clip of the Badu Gili light show.)
When the show finished, we descended the steps, took one last view of the Opera House and bridge, now lit up against the dark sky, and made our way back to our hotel for a good night’s sleep. It was, indeed, the perfect beginning of our trip to the land Down Under.

My brother Steve and his wife Karen toured Southern Italy in September 2017 on a thirteen day Rick Steve's tour featuring ancient ruins, local culture, delicious food, beautiful scenery and much more. After touring the wonders of Rome, they experienced the wild beauty of the Gargano Peninsula and Adriatic Coast, the Puglia and Basilicata regions, followed by historic sites at Paestum and Pompeii, the Amalfi Coast, and ending in Naples.They came home with more than a thousand terrific photos and have graciously agreed to share a few of them at The Intrepid Tourist. Here is a mini photo album of their trip.