On one of our recent trips to Oakland, we took a short hike on the Huckleberry Trail, which follows a canyon in the hills above the city. We have done this hike numerous times before, but always from the other end. This time we began at the trail head at the park entrance.
It was a warm day, and the advantage of this trail is that it is mostly in the shade, with occasional views through the trees onto the grassy hills to the west.
We chose the upper branch of the trail which is mostly level. The other branch winds its way along the bottom of the canyon.
As we walked along the trail we encountered numbered signs marking trees and plants that are typical to the area, including the coast huckleberry bushes (Vaccinium ovatum) after which the trail is named. Another common plant is the chinquapin with its bristly fruits, which, according to the sign, are fed on by flickers and jays. (They must have a talent for bypassing the sharp outer spikes.)
Another typical plant is manzanita with its smooth, reddish bark. There were two kinds of manzanita along the trail-- the common variety, brittleleaf manzanita, and the rare pallid manzanita, which occurs in just a few East Bay locations.
At midday, when we took our hike, most birds and animals were quiet. But we did spot a tiny lizard, no bigger than my finger, scampering in the leaves.
I always marvel at how easy it is to escape the noise and congestion of the city and immerse oneself in nature when we are in Oakland. The Huckleberry trail, just a fifteen minute drive from downtown Oakland, is always an enjoyable walk, at any time of day or time of year.
For DIRECTIONS and a downloadable MAP, click HERE. 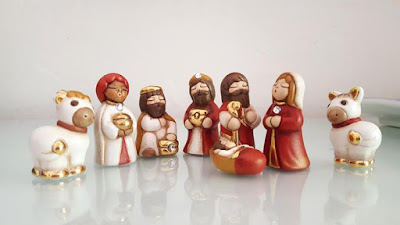 Every year at holiday time I get out our collection of creches, or nativity scenes, that we have accumulated over the years.  They come from all over the world and often have memories of travels associated with them. This year we have two new nativities to add to our collection, both from Italy. The first is a set of charming tiny (less than 2 inches tall) ceramic figures made by Thun, in Borzano, Italy. It was brought to us by an Italian friend and brings back memories of two special trips we made to Italy in the past year. The second, a teeny tiny one, we bought in Erice, Sicily, a hill town that features Nativity displays of all sizes at Christmas. 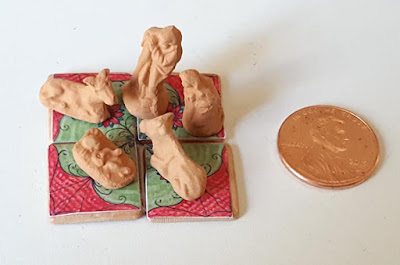 I am looking forward to celebrating the holidays with family and friends. With very best wishes to you for a

HAPPY HOLIDAY SEASON!
Posted by five nests at 8:00 AM No comments:

The late works of French painter, Edouard Manet (1832 - 1883), are currently on exhibit at the J. Paul Getty Museum in Los Angeles, California. Manet and Modern Beauty includes more than ninety works of art–paintings, drawings, pastels–providing a glimpse into the Manet’s incredible skill as a painter and to his life in his final years. I recently visited the exhibit. Some paintings were familiar, but many I had never seen before. In all, I was awed by his fluid brushstrokes, use of color, and ability to bring his subjects to life.
As I climbed the stairs to the second floor of the exhibition building, I realized that the vertical portion of each step had been painted to create a giant image of Jeanne, the featured work of the exhibit and a recent acquisition by the Getty.
When Manet created the painting, also known as Spring, it was intended to be the first in a series depicting the seasons.The painting shows a beautiful young woman with a flowered bonnet and parasol surrounded by lush greenery. It is the essence of spring rather than a conventional depiction. The series was never completed. Autumn was the only other season Manet painted, and this painting was also in the exhibit--a figure against background inspired by a Japanese silk scarf decorated with a chrysanthemum motif--flowers that bloom in the fall.
The exhibit is divided into five sections. The first, La Vie Moderne, includes paintings that were first shown at a solo show in 1880 at a Parisian gallery that was connected to a new fashion and culture magazine called La Vie Moderne.
Many of those paintings depict portraits of women in bars and cabarets. Others were of friends and relations or members of Paris society, such as opera singer Emilie Ambre, who was Manet's neighbor in the summer and fall of 1880.
The second section, Portraits of an Era includes various portraits, including an example of one he did in pastels. Between about 1878 and his death in 1883, the artist created nearly one hundred pastels, finding the process--which uses sticks of pure color--less demanding than painting.
The third section of the exhibit, The Four Seasons, includes the picture of Jeanne, Autumn and others.
In Manet’s final years his health was failing. In 1880 he spent the summer at a spa in Bellevue getting treatments for the pain in his left leg.  The fourth section of the Getty exhibit, Manet at Bellevue, displays illustrated letters written to friends and colleagues from the spa.
The final section, Flowers, Fruit and Gardens, was one of my favorite parts of the exhibit. The paintings are small, but brilliantly executed, with the peaches in one seeming so real that you want to reach out and grab one to eat. Manet had many friends, and they often visited him, bringing flowers, which he then painted. His paintings of roses, lilacs and other flowers appear as fresh as the day they were picked. And the glass vases holding the flowers sparkle in the light.
Manet has been called a “titan of modern art” by the director of the J. Paul Getty Museum. This exhibit is a showcase of his brilliance and mastery of the medium.
Manet and Modern Beauty was co-organized by the J. Paul Getty Museum and the Art Institute of Chicago, and is supported by an indemnity from the Federal Council on the Arts and the Humanities. For more information about the exhibit and visiting the museum, click HERE.

My brother Steve and his wife Karen recently spent eighteen days in Portugal and have graciously agreed to share a few of their wonderful photos of the trip. Here are their photos and a few notes from their itinerary. Part 1 posted last week. This is Part 2.
Batalha and Fatima
Classic Coimbra, a journey back to Portugal's Roman past.

Douro Wine Country, a drive through Portugal's most famous wine-making region, the Douro Valley.
Vineyard Views and the bustling port city of Porto
I thank Steve and Karen for their vicarious trip to Portugal!