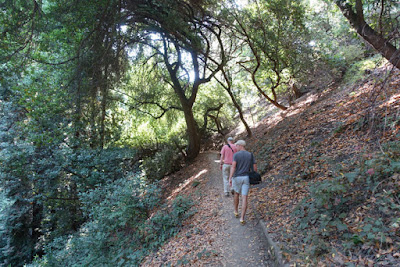 Joaquin Miller Park in Oakland, California, is one of many places in San Francisco’s East Bay where you can go to hike, bike, walk your dog, have a picnic or just enjoy nature. On a recent weekend my husband, son and I took a hike along the Palos Colorados trail, which winds its way along Palo Seco creek in a narrow canyon. (This trail is only for hikers or dogs on leash, but there is a biking trail on the other side of the creek. See map--link below.) 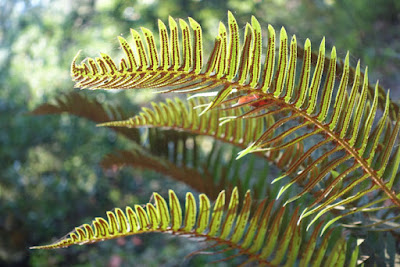 After parking our car at the trail head just off Mountain Boulevard, we set out along the path. After climbing a series of steps, the trail was fairly level, hugging the side of the canyon.  Far below, the creek gurgled as water made its way over the rocks and down the hill, ultimately ending in the ocean. 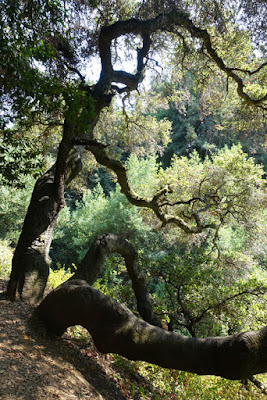 Gnarled California oaks grew along the side of the path, like creatures from a fairy tale. Along the lower slope, giant redwood trees towered more than a hundred feet into the sky. 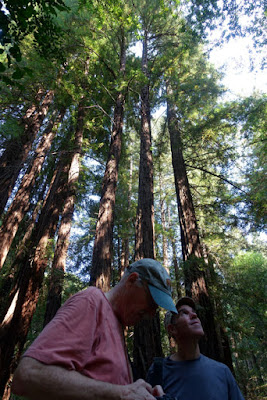 As always, the hike was an opportunity for photography. 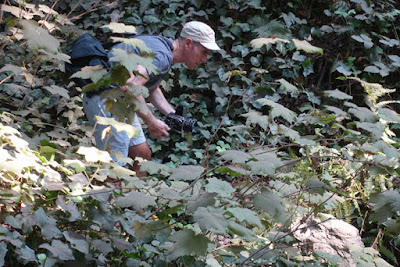 It was late summer and flowers were going to seed and ferns had developed their decorative spores. 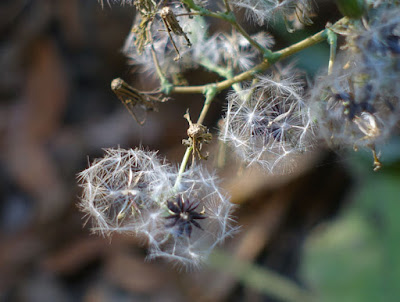 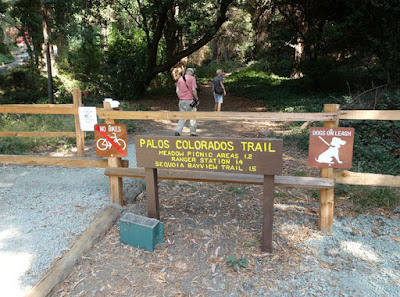 For my post about an earlier visit to Joaquin Miller Park and the eccentric man who inspired the park's name, click HERE.
Posted by five nests at 8:00 AM 2 comments:

My friend and fellow children’s book writer Sara Kras recently returned from a trip to the Islands of Fiji with her husband Joe. She has graciously agreed to share her impressions and a few of Joe’s fantastic photos. You can find out more about Sara’s books at http://www.saralouisekras.com/.
Once Known as the Cannibal Isles
In 1867, Reverend Thomas Baker, the only Christian missionary in Fiji, was killed and eaten by local natives. The natives thought his shoes were a part of his body, so they boiled them.  After several attempts of softening his shoes up through boiling, the natives gave up and tossed them aside.  One of his shoes resides today in the Fiji Museum located in the capital city of Suva.

I wasn’t aware of Fiji’s history so I was fascinated when I heard this story.  While visiting the “Cannibal Isles,” I wanted to see as much of them as possible.  I also wanted to see the vibrant reefs – which are hard to find in other places today.

We started on the main island of Vitu Levu.  Even though it was interesting, I can see why most tourists skip it and go immediately to the outer islands.  We then took the Awesome Fiji ferry to the Yasawa Islands.  We stayed in rustic accommodations called “Barefoot Manta.”  They had a resident biologist who monitored the channel next to Barefoot Manta to determine if the manta rays would come.  We only stayed one night so I was hoping we would see them.

At 6:45am on our departure day, the staff banged on a wooden log drum.  Then they ran around the camp and yelled, “Manta, manta, manta!”  Because it was so early, very few people formed around the dive/snorkel shop.  The water was like a sheet of glass and crystal clear.  Eight manta rays appeared and swam around us like ballerinas.
The water was filled with plankton and other particles.  This not only attracted manta rays, it also attracted hundreds of silvery mackerel.  The hour and a half snorkel was truly magical.
A sea plane picked us up in the Yasawa Islands and whisked us off to the Mamanuca archipelago.  We stayed at the most expensive resort in Fiji – Likuliku Lagoon Resort.
We didn’t opt for the over water bungalows as we’d stayed in those in French Polynesia and the Maldives.  Instead, we got a beach front room with a small private swimming pool.  It was three glorious days filled with incredible food, relaxing massages, white sand beach, and wonderful snorkeling.
The local ferry called South Sea Cruises deposited us at Nadi where we took a domestic flight to Savu Savu on the island of Vanu Levu.  We were then transferred by car, then by boat to our final destination, The Remote Resort.  I choose this place because I wanted to snorkel near the Rainbow Reef.  There was soft coral, hard coral, and hundreds of brightly colored fish.  This reef in this area was incredibly healthy.  It looked like an underwater garden.  It’s something EVERYONE should see if they can. 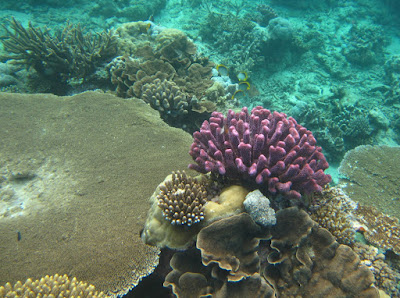 Below are several pictures of our snorkeling excursions in Fiji.  You can see hard and soft coral, along with colorful fish, giant clams, bright blue sea stars and more. 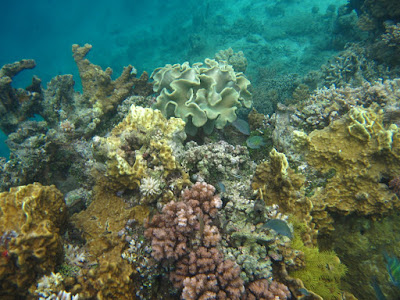 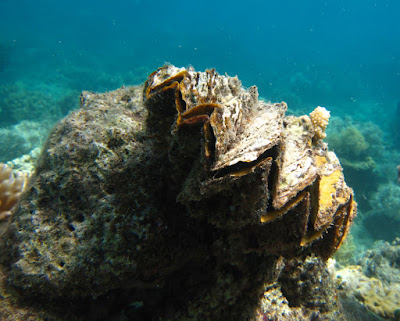 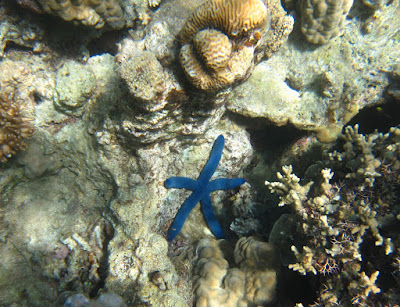 CANADA’S BAY OF FUNDY: Where Whitewater Rapids Rush UP a River, Guest Post by Caroline Hatton

My friend and fellow children’s book author Caroline Hatton visited the Bay of Fundy in New Brunswick, Canada, in October 2014. She took the photos and the video in this post.

Whitewater rapids caused by rising tides reversing the flow of a river? I had to see this. I had long known, from nature documentaries, about the world’s highest tides in the Bay of Fundy. But all I had seen was time-lapse videos of the corresponding, extreme ebbing tides lowering fishing boats the height of a five-story building, so that the boats had to be on extra long tethers to avoid dangling vertically like dead fish on a hook.

Weeks before traveling to the Bay of Fundy, I listed the “Reversing Rapids”  (in Saint John, New Brunswick) on my itinerary and googled Saint John Tide Times. Once in Saint John, I arrived at Fallsview Park on Fallsview Avenue in time for the high tide.
Tourists weren’t the only ones lining up to attend nature’s show. Cormorants also gathered on a small, rocky island in the river.
Here's my video of rapids rushing up the Saint John River:

The video shows the Saint John River, a church steeple on the opposite river bank, and the tips of two small islands. Left is down the river toward the Bay of Fundy. Right is up the river. In the few hours before I recorded the video, the tide had risen higher than the river level, gradually reversing the direction in which the water flowed. The narrow rocky gorge at this spot on the river squeezed this enormous volume of sea water, the same way a nozzle would. This created whitewater rapids, which peaked at high tide, the time of the video. Twice a day, the effects of the high tide can be felt more than 80 miles (~ 127 km) inland!
The cormorants, uninhibited by the violent whirlpools and churning foam, repeatedly flew up the water flow, plopped down, and dove out of sight to catch what must have been fish swept inland by the high tide. The birds resurfaced too far for me to tell whether they were visibly fatter.

After I left, the reverse flow would have slowed down as the sea water level began to go down. The sea and river water levels would have become equal, making the river look like a motionless pool for about 20 minutes between the high and low tide (slack tide). As the sea level dropped below the river level, the flow down the river would have grown stronger, until rapids rushed down the river at low tide. The flow down the river would have slowed until the next slack tide half-way to the next high tide. And this cycle of “Reversing Rapids” repeats itself twice a day.
Instead of watching the complete cycle, I enjoyed learning more at the Saint John InformationVisitor Centre, seeing fossils and art at the New Brunswick Museum, and shopping indoor at St John’s City Market.
For more info:

Caroline Hatton's post about the tidal bore at Truro near the Bay of Fundy. https://theintrepidtourist.blogspot.com/2017/11/canadas-bay-of-fundy-watch-tidal-bore.html

Caroline Hatton's post about the collapse of The Hole on Long Island in the Bay of Fundy. https://theintrepidtourist.blogspot.com/2017/11/canadas-bay-of-fundy-about-hole-that.html

Caroline Hatton's post about the Bay of Fundy’s Joggins Fossil Cliffs. https://theintrepidtourist.blogspot.com/2015/11/canadas-joggins-fossil-cliffs-guest.html
Posted by five nests at 8:00 AM No comments:

A WEEK ON THE BIG ISLAND OF HAWAII, Guest Post by Paige Arnold, en Français

My granddaughter Paige, age 12, attends a French/English bilingual school in California and her summer vacation assignment was to write a journal in French of her activities. In August, our extended family spent a week on the Big Island of Hawaii, staying in a rented house on the Kohala Coast. Here is Paige's report of our trip from her journal: 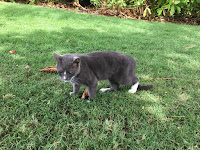 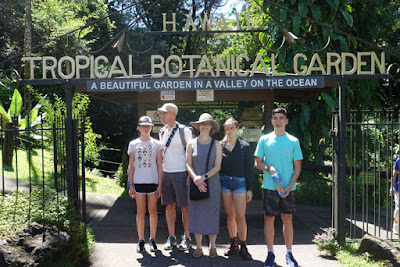 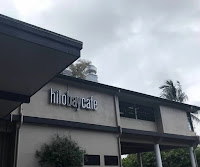