A TRIP TO ENGLAND: YORK AND LONDON, Guest Post by Jennifer Arnold


My daughter Jennifer, a professor at the University of North Carolina, recently went to England for a conference, but also had time to do a little sightseeing. I thank her for sharing a few of her thoughts and photos of her trip with the Intrepid Tourist.

I visited England September 5-11, 2022, for the Amlap ( Architectures and Mechanisms of Language Processing) conference in the city of York. My graduate student and I landed in London the morning of September 5 and took a train to York. After three days of the conference we came back to London on Saturday September 10, spent the afternoon sightseeing in London, and flew out on September 11.  While we were in England, Queen Elizabeth passed away on Thursday September 8. Below are pictures from both York and London.

York is a walled city in northeast England that was founded by the ancient Romans. Its huge 13th-century Gothic cathedral, York Minster, has medieval stained glass and 2 functioning bell towers. The City Walls form a walkway on both sides of the River Ouse. The Monk Bar gate houses an exhibition tracing the life of 15th-century Plantagenet King Richard III. ― Google 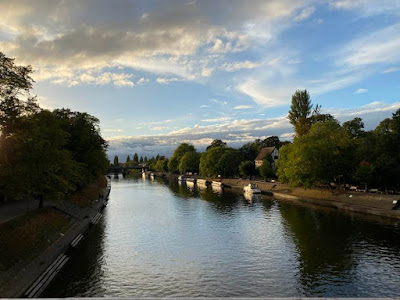 York is a delightful and scenic town, surrounded by walls. The river Ouse cuts through the city. 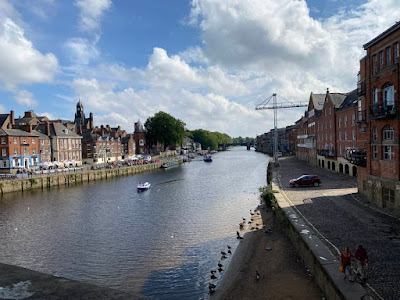 The weather was generally beautiful while we were there (just a little standard English rain), and I enjoyed walking and running on the paths by the river. 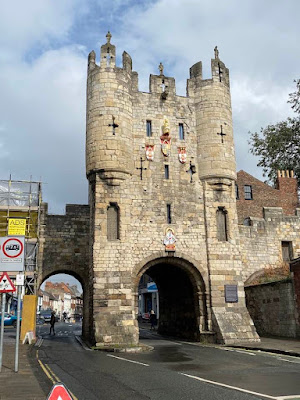 Here is one of the entrances to the center part of the city, which is surrounded by walls. Among the highlights of York is York Minster, a medieval cathedral. 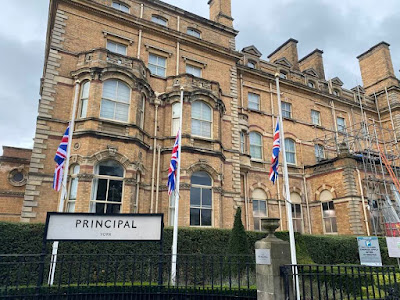 On September 10, after the passing of Queen Elizabeth, flags were at half-mast. 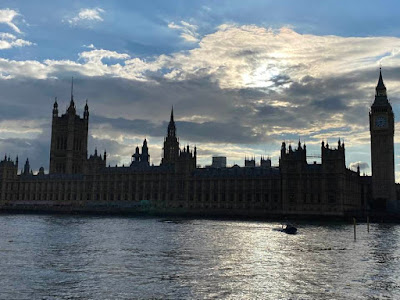 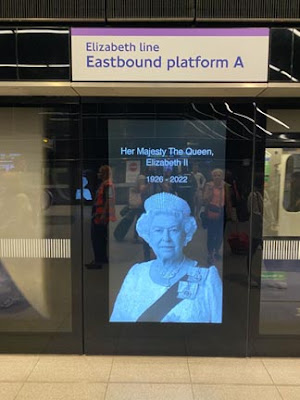 Across London there were numerous tributes to the queen. Her picture was projected on the Tube doors for the Elizabeth line. 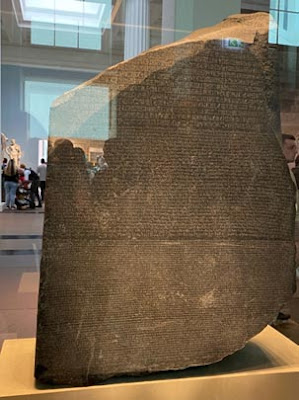 On our visit to the British Museum the Rosetta stone was a highlight (especially given that I and my student are language scientists). 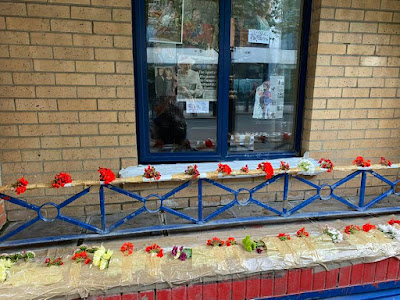 Around London there were numerous individual spontaneous tributes to the queen like this one outside a shop. 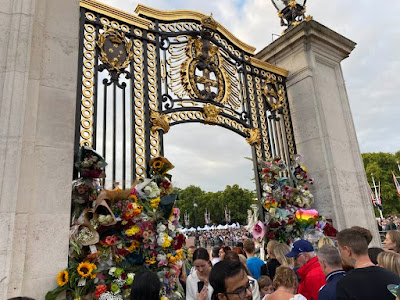 We walked past Buckingham palace on the afternoon of Saturday September 10, two days after the queen’s passing. The place was mobbed with thousands of visitors. 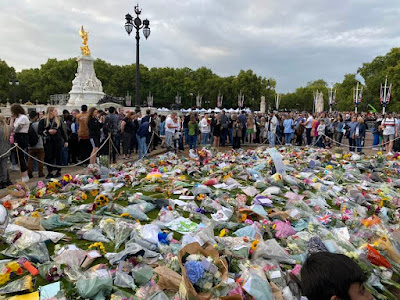 For those who were willing to wait in a long line, the guards were letting people through, a few at a time, to walk past the palace and pay respects. Everyone was being very calm and respectful. There were piles of flowers, home-made cards and stuffed animals filling the grass and decorating the outer gate.


The Guo Pei fashion/art show at the Legion of Honor art museum in San Francisco is amazing--more like sculpture and costumes than real clothes. And it is not just the clothes--it is the shoes, hats, hair, jewelry--all designed to go together. Part of the show is downstairs in the special exhibition gallery. Upstairs the models are placed next to pieces in the permanent collection.
The figures are very cleverly positioned --like a model wearing a dress with a ruffled skirt next to a 17th century portrait of a man with a ruffed collar, or a patterned dress placed in front of a tapestry. One of my favorites is a figure with a large helmet shaped headpiece standing under a large domed ceiling—like a pair of nesting eggs. The Guo Pei exhibit opened in April and has been extended to November 27, 2022, due to popular demand. For more information and to reserve tickets, go to the Legion of Honor website.

Each room in the exhibition gallery is devoted to a particular collection, each with a theme. The exhibit in the opening room, called “Inheritance” displays two traditional embroidered Chinese robes and explains how opulent embroidery, inspired by this ancient art, is a signature of Guo Pei’s work.
(Throughout the exhibit information panels, in both English and Chinese, provide information about the dresses and about where they fit in Guo Pei’s career.) 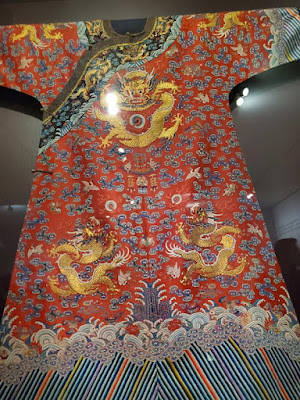 As a young girl growing up during the Cultural Revolution, Guo Pei found solace and inspiration in her maternal grandmother whose stories of elaborately embroidered robes enthralled the future couturier. As a young designer working for brand-name companies, Guo Pei longed to design embroidered clothing. However, richly embellished clothing, forbidden during the Cultural Revolution, had not yet regained popularity as fashionable dress.

Today, Guo Pei’s studio employs 450 craftspeople, of which 300 are embroiderers. Guo Pei and her team have developed their own interpretation of traditional needlework, creating a style that combines techniques from Chinese embroidery with Indian, Russian, and European stitches.(Notes from an exhibition panel.)


The dresses in the exhibit range from elegant to whimsical to bizarre to almost impossible to wear. (You can go online to view fashion shows of Guo Pei’s designs, with models actually walking down the runway.)
Each Guo Pei dress is unique.
It was impossible to resist taking photos. Here are just a few of my favorites.

“The culture of China is just like the blood that runs through my veins, it’s my life…China has more than 5,000 years of history, even longer culturally speaking. That history has greatly enriched my designs and is essentially a foundation of my work.” Guo Pei


It is said that only mad dogs and Englishmen go out in the midday sun. Add to that list: butterfly enthusiasts. Butterflies like the sun—using it to heat their bodies—and the best time to see them is on a warm, sunny day. So, on a warm, August afternoon we joined a group at the UCBotanical Garden in Berkeley, California, for a one hour guided butterfly walk through the garden.
We were met at the entrance to the garden by our leaders, Sally Levinson, the “caterpillar lady”, who had brought samples of anise swallowtail caterpillars for us to see up close while we waited for the group to assemble, and Sarab Seth the “butterfly guy”, who would lead us on our tour.

When I was growing up in the Midwest, my brothers and I collected butterflies--catching them in a net, killing them, and mounting them in glass-fronted boxes for our home “museum.” We learned to be careful as we handled them, not to touch their delicate wings and rub off the tiny colored scales. We also learned how to distinguish a butterfly from a moth by looking at the antennae—club shaped for butterflies and feather-like for moths. Now I prefer to appreciate butterflies free in the wild—although it is much harder to get a close-up look at them.

Before we set out on our walk, we each got a checklist for the species we hoped to see. It was divided into three sections: Likely sightings (5), Less Likely (5), and Even less likely (4). At the end of the walk we had spotted all five likely species (Acmon blue, Cabbage white, Field Crescent, Gray Buckeye, Mylitta Crescent), two of the less likely (Common checkered skipper, Monarch), and one that was not even on the list—a fritillary!


Of all the butterflies we saw, the only one that stayed still long enough for a good photograph (taken by Art) was a Mylittta Crescent.  And I got reasonably close to an Acmon Blue for a photo. But the other butterflies were too far away, even with a telephoto lens.

The butterflies that I am familiar with—monarchs, swallowtails, cabbage whites—are easy to spot in the wild. But many of the butterflies on the list were small—some less than an inch across—as well as speedy fliers. Once spotted, we hoped they would land so we could at least see their markings through binoculars. We were impressed by Sarab Seth’s ability to identify them in flight, even from a distance. Along the way, Sarab Seth pointed out which plants were preferred by each species—which helped in knowing where to look for the butterflies.
Our first stop was at an angelica plant, a favorite of the anise butterfly. Sarab pointed out a caterpillar, still eating but which would soon be ready to form a chrysalis.
Sarab also showed us a single anise butterfly egg (which he had discovered earlier on the same plant), tucked carefully under a leaf. In a few days it would hatch into a tiny caterpillar, which would then grow rapidly over the next few weeks, continuing the cycle.
The largest butterfly we spotted during our walk was a monarch—hard to miss with its handsome orange and black coloring. We see them often on walks in our Oakland neighborhood. When asked about the annual monarch migration, Sarab said that the monarch butterflies tend to stick around all year in the garden (unlike in the past when they gathered in clusters in trees along the California coast) because so many people plant milkweed in their gardens.

At the end of our walk we returned to the shade—leaving the bright sunny spots to the butterflies. I was glad I learned about these California butterflies that make the UC Botanical Garden their home. At the bottom of our checklist Sarab gave us the link to his Facebook page with photographs he has taken of 44 butterfly species in the garden. They are gorgeous! Click to enjoy—without having to go out in the midsummer sun!

As I travel, I want to know: What do people like me do? Where do they eat? What do they like best? What are some of their favorite places, both on and off the beaten track? Like most of you, my travel was severely curtailed during the past year due to Covid 19. As we begin to venture out again, I will go back to posting articles about current travel, to both local and more distant destinations. Many thanks to my many guest posters for expanding the breadth and scope of this blog.As always, you can use the search function to look for posts about a particular country, state or other categories.

Happy traveling, both real and virtual, in 2022!