Leaving Mysore by bicycle meant diving headlong into some of the craziest traffic I’ve ever seen. Actually, I loved the thrill of it. But I didn’t mind reaching quiet roads meandering through villages and farmlands.
We attracted curious attention whenever we stopped for a (frequent) water or tea break. Our guide said that Indians assume only impecunious eccentric foreigners ride bicycles rather than travel by car or motorbike.
Along the way we stopped at a madrasa, a school where Muslim boys study the Koran. We also visited a few ancient Hindu temples.
The Muslim Mughal Empire which spread over most of India in the 17th century destroyed many Hindu temples in the north. But the empire never reached the far south of the country, and so the ancient compounds, covered in beautiful elaborate relief sculpture have been preserved.
We cycled to Bandipur National Park where an evening van safari met no tigers, just monkeys and birds. But a walk next morning just across from our lodge took us a mere 100 yards away from a mother and baby elephant foraging for food.  We skirted around them, but I got only fuzzy photos.

A 13km bicycle climb (36 hairpin bends) attracted only five of our group. I joined a few others to walk up the steep slope through villages and woods. A break for tea and coconut cake at the top revived us all and we cycled on to Ooty, a former British hill station.
In the afternoon we were joined on a steam train (from the British era) by a most entertaining group of student nurses who serenaded us with Bollywood and Indian pop songs.
Next day we descended through the hills of the Western Ghats through lush tropical forest and tea plantations to the state of Kerala and the southwestern coast of India. More on that next week.

Cycling distances on this trip varied from 12-55 miles/day, averaging about 30 miles/day. Road conditions were good, most rides were on quiet back roads. Van support was always available for those who chose not to cycle. See www.exodustravels.com for more information on this and other tours. 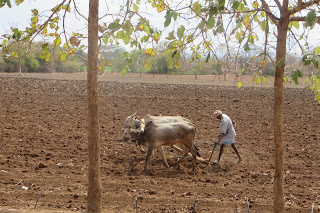 Selected bibliography:
The God of Small Things by Arundhati Roy. This 1997 Booker-prizewinning novel takes place in Kerala.
The End of Karma: Hope and Fury Among India’s Young by Somini Sengupta. A New York Times reporter, born in India and raised in the U.S., spent several years researching this 2016 book about India today.
Kim by Rudyard Kipling. Story of a street orphan and Tibetan lama in 1890s India: a spy thriller, social commentary, and poignant coming of age story. One of my favorite classics.
Posted by five nests at 9:00 AM No comments: 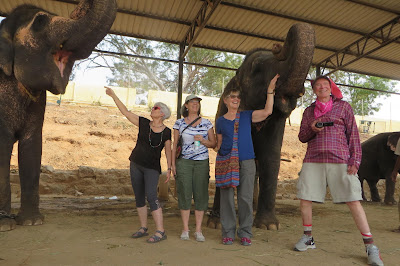 An afternoon wandering through the locals’ market (no tourist tat in sight), reminded me why I love India. The profusion. Colors, textures, smells, tastes, friendly people. No hustlers here, just locals out shopping. Men polishing brass pots or frying banana strips in sizzling coconut oil. Women in saris and salwar kameez whose sense of color and style put us to shame. 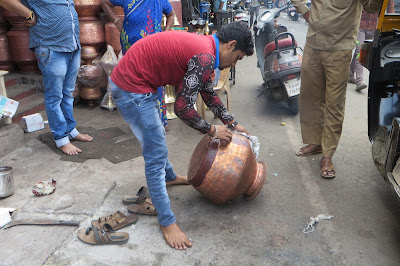 We explored the Mysore Palace, a massive over-the-top Victorian pile built in the early 20th century. Not my cup of tea, but illuminated at night it’s quite a sight. The estate was nationalized by the Indian government at independence and the current maharajah lives in a flat round the back. Elephants, used for a few parades each year, live in one corner of the grounds. Their keepers welcomed us and boosted us up for an elephant’s eye-view of the territory. 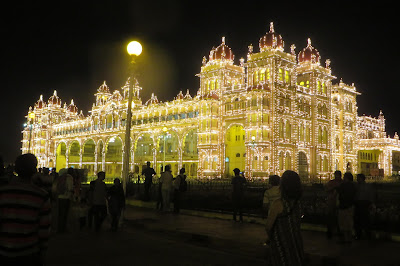 Off in a quiet corner of the huge grounds is a small temple where we found the resident Brahmin priest picking mangoes from a nearby tree.  He also performs the daily pujas (offerings) and a woman renews the rice flour mandala drawings on the ground each morning. 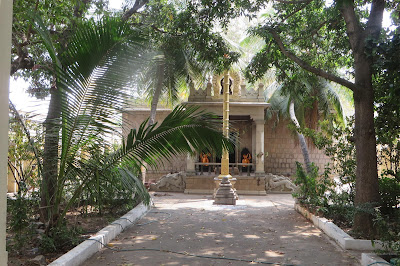 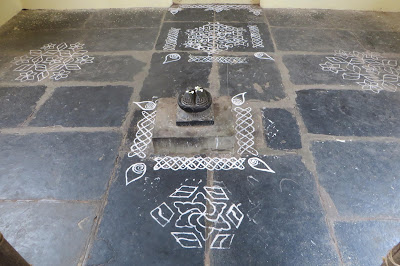 And tropical fruit, picked ripe – words fail me. Fresh pineapple juice unlike anything I’ve ever tasted. Papayas, tiny bananas, mangoes – so sweet. As a vegetarian I’m sometimes deprived of regional specialties.  Not in South India. 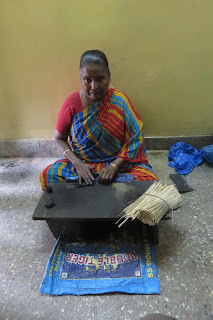 Next: On the road to the Nilgiri hills – frenzied traffic and quiet rural lanes.

See www.exodustravels.com for more information on this and other tours.

The God of Small Things by Arundhati Roy. This 1997 Booker-prizewinning novel takes place in Kerala.
The End of Karma: Hope and Fury Among India’s Young by Somini Sengupta. A New York Times reporter, born in India and raised in the U.S., spent several years researching this 2016 book about India today.
Kim by Rudyard Kipling. Story of a street orphan and Tibetan lama in 1890s India: a spy thriller, social commentary, and poignant coming of age story. One of my favorite classics.

One of our most memorable trips ever was to Lake Louise in Banff National Park, Canada, during Easter week in 1996.
In the lobby of the hotel there was a display with spring flowers and live bunnies and chicks in honor to the season, but outside it was still ice and snow, with all the pleasures of winter sports–skiing, skating, bobsledding, snowshoeing and more, in one of the most spectacular landscapes on Earth.
We had brought with us our cross-country skis, which we used on the miles of trails across the lake and through the woods, and our ice skates, which we used on the cleared frozen lake ice right in front of the hotel. In the evening, hot cocoa was served at the skating rink. One afternoon we went on a dogsled ride through the forest.
Another day, I took a tour bus through the park, stopping at the giant Athabascan Glacier.
Nearby we saw an enormous frozen waterfall where we could see tiny figures of ice climbers ascending the ice. Along the way we saw elk, moose, and mountain sheep near the road.
Every morning as we woke up and looked out our window at the surrounding peaks, it felt like another day in paradise.


The city of Santa Cruz sits at the north end of the wide half circle of Monterey Bay on the California coast. At Natural Bridges State Beach, named for the large arched rock just offshore, one can get down on the beach for a close-look at wildlife and, on a warm day, splash in the waves.
A week ago I was visiting a friend who lives near the park and we took a morning walk along the beach. Overhead, gulls and ravens circled in the air and pelicans glided by like fleets of  tiny fighter jets. On shore, groups of tiny dunlins skittered in unison along the water’s edge searching for tidbits in the wet sand.
The tide was going out and a group of egrets was foraging in the shallow water at the edge of the waves and along the creek that empties into the bay. We were able to get surprisingly close to the birds as they stalked their prey.
We then climbed up from the beach for a walk along the bike path that runs along the top of the cliff next to the water. Our goal was an overlook onto a rock shelf that is a rookery of Brandt’s cormorants.
Pairs of birds were building nests and we watched as they jostled one another and males extended their necks in courtship displays.It was, in fact, the first day of spring. Soon the birds will be laying eggs and another cycle of life will begin.
In addition to bird watching at Natural Bridges State Beach, one can explore the tidepools at low tide, and, in winter, see monarch butterflies in the Monarch Butterfly Natural Preserve within the park. One can also picnic and hike along the trails through the park.

For information about visiting Natural Bridges State Beach and about the various activities available, click HERE.
Posted by five nests at 9:00 AM 1 comment: