California’s Route #1, from San Simeon to Big Sur, is the quintessential California coast highway, winding its way north from a gentle plain, up and around steep cliffs, across tall bridges, through deep valleys, and at Big Sur, into a redwood forest. In the second week of December, I drove Highway 1 on my way to and from a writing workshop in Jules Pfeiffer Big Sur State Park. Although I have driven this road before, I am always amazed by the sheer grandeur of nature.
At the southern end of the route, near San Simeon, hundreds of elephant seals live along the coast, coming onto the beaches to rest and breed. Elephant seals are enormous (weighing up to 8000 pounds!) and get their name from the males' long snouts. In December and January males joust for dominance and the opportunity to breed with females. On the afternoon that I stopped at the overlook I heard the loud roars of males declaring their territory and watched as they pushed and shoved one another in the shallow water.

The beach is just below the parking area so it is possible to see the animals at fairly close range and they are seemingly oblivious to people watching them.
After San Simeon the road becomes steeper as it hugs the cliffs and canyons. I stopped several times at overlooks to appreciate the view. I was hoping to see California condors, which frequent the coast and feed on carrion washed up on the beaches. Just as I passed the turnoff for Julia Pfeiffer Burns State Park, several condors suddenly appeared over the highway, gliding on their nearly ten-foot wide wingspan.
Finally, I arrived at Jules Pfeiffer State Park and Big Sur Lodge, nestled in the redwoods along the Big Sur river, where I spent the weekend at a writer’s workshop organized by the Henry Miller Memorial Library along with the Andrea Brown Literary Agency. I was one of the faculty at this annual writing workshop. (Writer Henry Miller (1891-1980) lived in Big Sur between 1944 and 1962. The library is worth a stop if you are driving up the coast.)

From my cabin deck I had a lovely view of the grounds, where deer were so comfortable that they barely noticed guests walking by! Delicious meals were served in the Lodge dining room. During a break in the schedule we visited the amazing gift shop at Nepenthe and then had coffee on the gorgeous outdoor patio at Ventana, a resort and restaurant nearby.
The visit to Big Sur brought back memories of my honeymoon in the park nearly fifty years ago. The difference is that for our honeymoon we slept in a tent in the campground! But the spectacular scenery and closeness to nature is still the same. It will always be one of my favorite places.
Posted by five nests at 9:00 AM No comments: 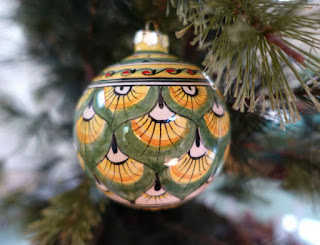 With best wishes for a
HAPPY HOLIDAY
and
PEACEFUL NEW YEAR!
Our beautiful ceramic Christmas ball made in Deruta, Italy, is a souvenir that reminds us of our travel in this past year and will decorate our Christmas tree for years to come. I hope that your holiday will provide you with many happy memories as well.
Posted by five nests at 9:00 AM No comments:

AFRICAN SAFARI in 1974, from the Memoir of Carolyn T. Arnold

My husband Art’s Aunt Carolyn led tour groups all over the world, and in the summer of 1974 she took a group to Africa. While much of Africa has changed since then, the thrill of seeing wild animals in their native habitat will always be the same. Here are a few of her photos and a description of part of their trip.
One year our group went on an animal safari in Africa. We visited Johannesburg and Nairobi, but mainly we stayed at safari camps out on the wide, wide plains. Most of the camps were in Kenya. We saw countless animals, wild and free, protected in their native habitat. We were not allowed out of the van, but the top was raised so we might photograph those animals which came close. The driver’s keen eyes could spot a group of animals long before we could see them–giraffes, antelope, elephants, leopards, lions, zebras, buffaloes, impalas and many more.
We stayed one night at Treetops, built high on stilts and bedrooms at second story level. A balcony extended across the front of the building, so we could sit there and watch the animals come out from the trees to the water hole, mainly in the evening. We were led a short distance from our van by a man with his rifle, in case some animal ventured into our path. Also, he pointed out, there were camouflaged niches which we could dash into if necessary.
We also were warned about the monkeys. “Hang onto your purse or anything you are carrying,” the guide said. “The monkeys, always curious, will pick it up in a hurry.” As we were sitting on the balcony that afternoon, Hazel opened her purse for a handkerchief. Quick as a flash, a monkey climbed down from the roof overhead and snatched it away. She should have let the monkey have it, but involuntarily, she reached out her hand for it. So she got a monkey bite on her arm. It was nothing serious, but how astonished she was.
During the night, a mighty shaking of the building aroused us. Nothing more happened and all was quiet. In the morning, we found out that a rhinoceros had become caught between the poles supporting the tree house and was wildly shaking its horns to free itself.
An African safari is well worth a visit; also sunrise over Mount Kiliminjaro.
Perhaps the original intrepid tourist was Carolyn T. Arnold, my husband’s aunt.  A single school teacher in Des Moines, Iowa, she began traveling abroad when she was in her forties, beginning with a bicycling trip through Ireland in 1950.  She went on from there to spend a year as a Fulbright Exchange Teacher in Wales, to more trips to Europe and beyond, and eventually became a tour leader, taking all her nieces and nephews (including Art) on her travels.  When she retired from teaching, she wrote of her experiences in a memoir called Up and Down and Around the World with Carrie.  Today, as I read of her travels, I marvel at her spirit of adventure at a time when women did not have the independence they do today.  You can read of some of her other adventures in these posts on this blog:  October 21, 2013; October 7, 2013; July 29, 2013.March 10, 2014, January 12, 2015, June 8 and 15, 2015; August 17 and 24, 2015; October 26, 2015.
Posted by five nests at 9:00 AM 2 comments:

Our visits to North Carolina to celebrate Thanksgiving with our daughter and her family always include walks in the beautiful forests near their home in Chapel Hill. This year one of our walks was in the Johnston Mill Nature Preserve near Durham. This 296-acre preserve includes five well marked trails that make their way through a variety of habitats from mature forest to open brush land. Each trail is named and color coded with markers along the way.
We began by following the Robin’s Trail which goes along the course of New Hope Creek. We then made a diversion onto the Bluebird Trail which ran along the high line and then joined the Old Field Bluff trail before coming back to the Robin’s Trail and the return to the parking lot.
It was a beautiful fall day with sunshine filtering through the bare branches of the tall trees. There were a few other people hiking and walking their dogs, but the trails were not crowded and it was the perfect place to spend a few hours and enjoy the peace and beauty of nature.
The Johnston Mill Nature Preserve is managed by the Triangle Land Conservancy.
For a map, directions, and more about the Johnston Mill Nature Preserve go to:
https://www.triangleland.org/what-we-do/nature-preserves/johnston-mill-nature-preserve