The Phillips Collection in Washington, DC. is not exactly off the beaten path, but many visitors to the capital do not realize the wealth of art that it contains. On our recent trip to Washington we discovered that the museum was just a few blocks from our hotel, so we went for a visit.
In 1921, Duncan Phillips, and his wife, Marjorie Acker Phillips, a painter, turned the family art collection into a public museum, the Phillips Memorial Gallery, in their home near Dupont Circle in Washington, D.C. The collection soon expanded and the family moved across the street, turning over the entire house to art.
From the beginning the collection focused on “modern” art, acquiring paintings by French Impressionists such as Monet and Renois and Cubists such as Picasso and Braque. Giving equal focus to American and European artists, Phillips juxtaposed works by Winslow Homer, Thomas Eakins, Maurice Prendergast, James Abbott McNeill Whistler, and Albert Pinkham Ryder with canvases by Pierre Bonnard, Peter Ilsted and Édouard Vuillard.
But the painting that makes the museum famous and draws the most visitors is Renoir’s Luncheon of the Boating Party. On our recent visit to the Phillips Collection we happened upon a docent talk in which we learned the identities of all the people depicted in the painting and the history of its acquisition. (The man in the lower right corner is painter Gustave Caillobot, a friend and financial supporter of Renoir.) Phillips paid $125,000 for the painting–a sum far beyond anything that had ever been paid for a painting before. It turned out to be a good investment!
As the collection expanded over the years it became necessary to add a new wing to the museum. Every room is filled with remarkable art. One small room is devoted to four paintings by Mark Rothko, each intense canvas taking up most of each wall. Standing in the middle one feels bathed in color on every side. (It is the one room in the museum where photography is not allowed.)
Another room contains the 60 paintings of the Jacob Lawrence Immigration Series, depicting the migration of African Americans from the rural South to the urban North.. As one circles the room, it is like reading a book. In another room was a remarkable series of photographs, all taken at night and therefore very dark, but with small glimmers of light. The series traces stops on the Underground Railway as they look today.
The Phillips Collection continues to expand and in two years will be celebrating its 100th anniversary. Visiting the permanent collection is free. Special exhibits require paid tickets. We did not have time to see those. 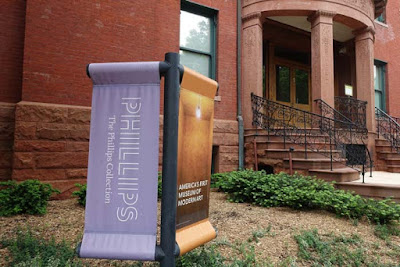 The museum has a nice small café (where we had lunch) and a very nice gift shop. And when I went to the ground floor to the rest room, I passed an exhibit of children’s art created in a joint project of the museum and the Maryland Department of Education. Art education is so often neglected in today’s schools, so I was pleased to see the museum’s involvement in the local community.
Posted by five nests at 8:00 AM 1 comment:

VOTES FOR WOMEN: A PORTRAIT OF PERSISTENCE, Exhibit at the National Portrait Gallery, Washington, D.C.

In anticipation of the 100th anniversary of the 19th Amendment to the Constitution giving women the right to vote, the National Portrait Gallery in Washington, D.C. has organized a special exhibition tracing the more than 80-year movement for women to obtain the right to vote as part of the larger struggle for equality. It is called Votes for Women: A Portrait of Persistence.
On my recent trip to Washington, I had a chance to see the exhibit–a wonderful array of photos, videos, paintings, posters, books, pennants and much more. From a 19th century portable ballot box to a Suffragette cookbook, every object in the exhibit has a story. A few of the items that particularly fascinated me are below. But the best way to get a sense of the breadth of the exhibit is at the Google Arts and Culture website with its slide show of selected items. The accompanying book for the exhibit, Votes for Women: A Portrait for Persistence by Kate Clarke Lemay, who also curated the exhibit, is available at the museum shop and online.
These are just a small sample of the items in this exhibit. Votes for Women: A Portrait of Persistence will be on exhibit until January 5, 2020. If you are in Washington, D.C., it is well worth a visit. 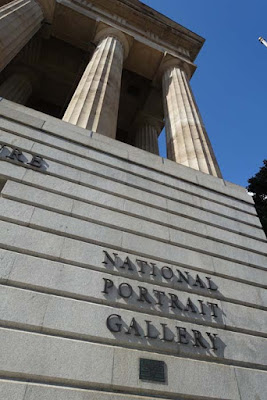 My brother Tom loves to travel and is a true intrepid tourist. He is currently on a trip to South America, which has included stops in Ecuador, Peru and Paraguay. In Peru he and his friends visited Machu Picchu, the World Heritage ancient Inca site in the Andes. I have never been to Machu Picchu but would love to go some day. Several Intrepid Tourist readers have shared their experiences at Machu Picchu in past articles. I am always impressed that even though the place is the same for everyone, each person's experience is unique, depending on the time of year, the weather, and what they personally bring to the visit. Here are a few of Tom's comments and photos.

Today we took the train from Cusco down to Machu Picchu. (The elevation of Cuzco is over 11,000 feet (3399 meters);  the elevation of Machu Picchu is 7,972 feet (2,430 meters) above sea level.)
We are staying in a really nice hotel right by the river looking at a beautiful green mountain.

Tomorrow morning we go up to the temple and spend the day hiking around up there.


In 1983, Machu Picchu was declared a UNESCO World Heritage Site.

California’s torrential rains this past winter have produced the most spectacular bloom of wildflowers in years. From the deserts of Anza Borrego and Joshua Tree National Park to the Poppy Preserve in the Antelope Valley to people's back yards, flowers are everywhere. (See Gretchen Woelfle’s recent guest post 4/15/2019.)
While the giant fields of poppies at lower elevations in Southern California have been replaced by sage and other less colorful vegetation, the hills and valleys at higher elevations are still blooming. At the Tejon Pass through the Tehachapi Mountains near Gorman, the hills look like they’ve been painted with a giant brush–orange for poppies, blue for lupins, yellow for goldfields.
On Easter weekend, as we headed north on I-5, we took the bypass on the local road through Gorman for a closer look at the flowers. Here are a few of the many flowers we found growing near the road.
The superbloom continues!