My friend, Kathryn Mohrman, an avid and excellent photographer, visited Turkey earlier this year when she was on her way to Ethiopia.  She has graciously agreed to share some of her photos and impressions of her visit to Turkey. Kathryn is a professor at Arizona State University and travels widely for her job as director of several projects with partner universities in China and Vietnam. You can see photos from her trip to Lalibela, Ethiopia, at her 2/17/14 post on this blog.  I have known Kathryn since we were students together at Grinnell College in Iowa. Here is her report of part of her trip to Istanbul.

Around Christmas and New Year's, 2013, I traveled to Istanbul to see the only city in the world that straddles two continents.
Breakfast in my hotel.  I became especially fond of soft yoghurt with local honey (the small dish on the left). 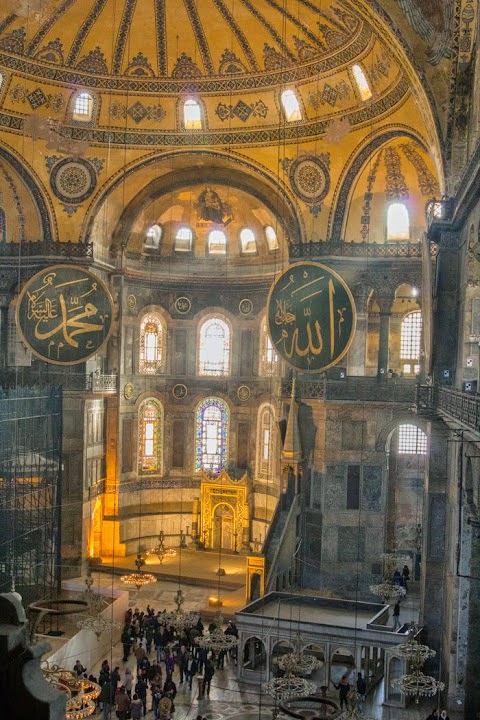 The most impressive structures in Istanbul are the mosques.  The Hagia Sophia was originally built as a Byzantine Christian cathedral  in the 6th century, converted to a mosque in the 15th century, and is now a museum. It is huge!  The great dome is 184 feet above the floor of Hagia Sophia. The medallions around the nave are the names of important prophets. The small structure near the center of the photo (where the altar would be in a Christian church) is the mihrab, the niche indicating the direction of Mecca, and thus the direction to face for prayer.


About four blocks from my hotel, on the opposite side of Sultanahmet Square from the Hagia Sophia, is the Blue Mosque.  It gets its name from the predominantly blue Itzik tiles in the interior.
Early on I went to Tahrir Square, site of significant protests not too long ago.  It was peaceful when I was there, but I noticed a significant police presence (lots of police cars and soldiers in the background).  Tahrir Square is rather small--I was expecting something larger given the importance of the place in recent history.
This is the main street running downhill from Tahrir Square toward the Golden Horn
Istanbul is known for its covered markets, and the Grand Bazaar is THE grand bazaar.  I found it overwhelming.  After an hour or so, I fled.
I also walked around open-air markets that were frequented by local people. But I found mosques to be more peaceful, even with lots of tourists. On the day I took a food tour of Istanbul (see my post for 7/3) we stopped at Rustum Pasha mosque, known for its wonderful tile work.  Unlike the situation in larger mosques, we could walk throughout the mosque when there were no services.
Topkapi Palace, former residence of the rulers, is a must-see.
I also attended a whirling dervish religious ceremony.  I'm not a particularly religious person but I found the ceremony to be very spiritual.

My friend, Kathryn Mohrman, an avid and excellent photographer, visited Turkey earlier this year when she was on her way to Ethiopia.  She has graciously agreed to share some of her photos and impressions of her visit to Ephesus, the ancient city in southeastern Turkey known for its Greco-Roman ruins. Kathryn is a professor at Arizona State University and travels widely for her job as director of several projects with partner universities in China and Vietnam. You can see photos from her trip to Lalibela, Ethiopia, at her 2/17/14 post on this blog.  I have known Kathryn since we were students together at Grinnell College in Iowa.
The site of Ephesus has been occupied for at least 6000 years, with Mycenaean, Hittite, Lydean, Greek, Persian, Macedonian, Roman, and Byzantine citizens, up to 250,000 when the city was the capital of Roman Asia Minor. By the 6th century AD the harbor had silted up, however, so Ephesus was no longer a lively trading port. Earthquakes also damaged the city. Gradually people moved away and the site was abandoned.

Today Ephesus is a national monument displaying artifacts unearthed by Turkish and European archeologists--but 80% of the ancient city remains buried. Like many Roman cities, Ephesus has a huge amphitheater.

While some walls and structures are standing, a more common sight while walking through Ephesus is a jumble of fragments, some of them beautifully carved. Most of the artifacts are simply displayed rather than reconstructed into actual buildings.

The highlight of the city is the Library of Celsus, built in the 2nd century AD. At one time it contained more than 12,000 scrolls!
What a fascinating place! I'd love to have the chance to see more of Turkey.

The following is an excerpt from the diary of our trip to China July, 1995.  We were traveling with three friends, spending five days in Beijing and then three days in Xian.  China has changed greatly since our visit but many of the places we went to are still among the popular tourist spots.
Beijing, Day 5:  Our last day in Beijing was a free day with no organized tours.  In the morning, Art and I took a taxi to the zoo.  The weather was hot but not unbearable.  The panda exhibit is the first inside the gate and required an extra fee.  The inside enclosures were filled with cut bamboo and one panda was eating.  The others were more active outside.  We also photographed a red panda, which circled around and round its enclosure before finally climbing a tree to sleep.  After leaving the pandas we searched for other Chinese animals and saw some cranes and golden monkeys.  The zoo is huge and we got somewhat lost because there weren’t many maps.  At the far end we found two polar bears play-fighting in the water.
After the zoo we took a taxi to the Great Bell Temple to see the biggest bell in China.  You can read more about the bell in my post on 6/30/14.

That evening we went out for a Peking duck dinner at a restaurant recommended by the hotel.  The waitress convinced us that we needed two ducks (for five of us) but we would have been better off with just one because they were so greasy and rich that we ate too much and felt sick the next day.  The waiter brings the whole roast duck on a cart and then carves the pieces into piles on small plates.  You eat them with your hands, folding the duck pieces inside thin pancakes that have been swabbed in bean sauce. Afterwards we watched them prepare and cook the ducks and bought a few souvenirs, including a duck hat for Art.
We then walked back to our hotel via Tiananmen Square, where people were picnicking, talking, playing badminton and soccer, and flying kites.  (Badminton was obviously very popular in China. Every night on television we saw broadcasts of the international badminton championships which were being played that week.)  The moon, which had been a crescent earlier in the week, was growing fuller and small bats flew among the kites catching insects.  After a hot day, the relatively cool night air was refreshing.

The following is an excerpt from the diary of our trip to China July, 1995.  We were traveling with three friends, spending five days in Beijing and then three days in Xian.  China has changed greatly since our visit but many of the places we went to are still among the popular tourist spots.

Beijing Day 4:  On the morning of our third full day in Beijing we were scheduled to tour the Temple of Heaven, but as we had already visited several temples, we asked to visit the Minorities Park instead.  The Minorities Park was a government enterprise and had only opened a year before.  It is a sort of Disneyland approach to bringing samples of China’s many ethnic minorities to the capital–saving tourists the trouble of traveling to the hinterlands.  It also seemed to have an educational purpose–almost the only other people there on the day we visited was a school class on a field trip.

The park was divided into sections by ethnic group and showed houses, gardens, tools, etc.  We started at the Tibet exhibit, where for a fee you could actually go into a small temple and take photographs.  Outside was a giant prayer wheel and a row of smaller ones.  The wheels are inscribed with prayers and as you turn them the prayers are repeated.
We then went to another area to watch a dance celebrating a water festival.  At the end of each dance the dancers and people in the audience scooped water out of tubs placed around the dance floor and threw it at one another. It was the perfect activity for a hot day and, by the end, everyone was soaked.  (Later we saw the dancers’ clothes hung on a line to dry.)

For lunch we went to a restaurant housed in what once had been an imperial room–inside it was blessedly dark and cool and the food was the best in three days.  Like each of the other restaurants we had been taken to, this apparently only catered to tourist groups.
For the afternoon we went to the Lama Temple, which we thought was pretty, but not that different from other temples.  I kept sneezing when I got near incense, which was everywhere.
For an article about the Ethnic Minorities park in the NY Times, click HERE.