On a recent visit to the Art Institute of Chicago, I met, once again, the famous sculpture of a young dancer by Edgar Degas. It was like meeting an old friend. In each case, her tutu was a different color, but the figure, paused in thought, was the same.
My first encounter with her was in Paris at the Musee D'Orsay in 1998.
I then met her again a few years later in Pasadena, California, at the Norton Simon Museum.
And then, on a trip to Washington, D.C., three years ago, I saw her again. My previous views–in Paris, at the Norton Simon Museum in Pasadena, and in another exhibit at the National Gallery–were all casts made after his death.  This time I saw Degas’ original wax sculpture of the Little Dancer from which the casts were made, so for the first time I could see how the surface was modeled.  The figure is made of wax over a metal armature to which the artist added wood, rope, and even old paintbrushes in the arms.  Then a wig of human hair was added as well as a cotton-and-silk tutu, a cotton faille bodice, and linen slippers. Her turned out toes, erect posture and raised chin seem to convey an inner determination.The wax model of Little Dancer Aged Fourteen was on view from October 5, 2014 to January 11, 2015.
For a fascinating history of the various versions of the young dancer sculpture, click HERE.
Posted by five nests at 9:00 AM No comments:

No one who visits Chicago can fail to be impressed by the soaring skyscrapers and other large historic buildings that crowd the downtown. One of the best ways to appreciate their beauty, origin, and role in Chicago’s history is to take a river cruise sponsored by the Chicago Architecture Foundation, which I did on a recent visit. The cruises are narrated by knowledgeable volunteers who point out key features of the buildings, tell about who designed them and when, and about their significance.
It was a beautiful sunny day, not too warm or windy. To board the boat we went to the dock, located on the river walk just east of the stairs descending from Michigan Avenue.
We sat in long rows of chairs on the top deck of the ship, affording us with a 360 degree view of our surroundings. The trip began by sailing westward up the river to the north branch, passing under numerous bridges. Although built as drawbridges, we were told that they are now raised only twice a year, in spring and fall, to let large boats into or out of  their winter docks. After the cruise was finished, we walked along the river and visited one of the bridge houses, now turned into a museum.
Most of the buildings in Chicago today were constructed after the great Chicago Fire of 1871 that had destroyed much of the city. As we made our way up the river, it was a trip through history, although jumbled together. Side by side are old and new, lavishly decorated and starkly plain, utilitarian and almost whimsical.

I was particularly fascinated by the reflective glass of some buildings that echoed and altered their neighbors across the river. Or, in some cases, the river itself.
River Point marks the confluence of the river's main stem with its two branches. The arches at the top and the bottom are designed to reflect  the shape of the building and the curves of the surrounding banks--both literally and figuratively .
Marina City, built in 1967, are two giant towers that are part of a multi-use complex. The curved balconies remind people of giant corncobs.
At the end of the cruise we headed toward Lake Michigan, turning around at the Marina. To our left was the amusement park on Navy Pier.
As we turned around we were treated to the full panorama of the Chicago skyline. It was spectacular.
After docking, we ate lunch at one of the many riverside restaurants, and then took a walk along the river to enjoy the sights and sounds of life along the water's edge. I thank Jim Akerman and Luann Hamilton and their daughter Claire, for treating me to this wonderful view of their city and for being most generous hosts during my visit.
To learn more about Chicago architecture, visit www.architecture.org

THE CHICAGO ART INSTITUTE: From Paperweights to Impressionists and More 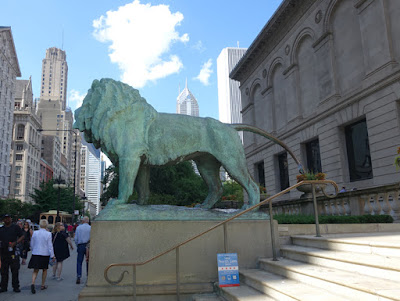 Two stately lions guard the entrance to the Art Institute of Chicago, one of the oldest and largest art museums in the United States, and one of my favorites. As I walked up the steps from Michigan Avenue and opened the door, stickers proclaimed it to be Chicago's number one museum choice on TripAdvisor.
My visit to the museum on a recent trip to Chicago was an opportunity to become reacquainted with some of the museum's most famous paintings, including George Seurat's Sunday Afternoon on La Grande Jatte, Vincent Van Gogh's Bedroom at Arles and a number of Claude Monet's haystack paintings.
I have fond memories of visiting the Art Institute as a child and when I was in college and art school in Iowa (we rode to Chicago on the train.) I haven't been back since, so it was a delight to visit again. The museum has grown enormously with several additional modern wings.
Like most large museums, it is impossible to see everything in one visit so I decided to focus on the modern European and American wings. But on my way, I saw a sign pointing downstairs to an exhibit of paperweights and a special photography exhibit.
My parents had their own small collection of paperweights so I was intrigued to see that exhibit–hundreds of glass paperweights arranged in artful designs.It is one of three premier collections of paperweights in the world. Other well-known paperweight collectors include Truman Capote, who wrote that the paperweight was like "some fragment of a dream."
I am always interested in photography, so I went to see that exhibit too. It was a selection of photographs acquired by Hugh Edwards, curator of photography from 1959 to 1970. Edwards wrote about a photo by Cartier-Bresson of children playing by the Seine, "There are many great photographs by Cartier-Bresson, but this always remains my favorite."
My visit to the museum was short and I was able to see only a fraction of the pieces on exhibit. I hope it won't be so long before I go back again.
A special exhibit of Gauguin paintings opened June 25th and will be open until September 10th.

Imagine a furry creature more than fifteen feet tall living in your back yard–but only if you were around 33 million years ago. This giant animal, weighing in real life more than 20 tons, is Indricotherium and once lived all across Eurasia. Today, as a life-size model, it greets visitors to the new Extreme Mammals exhibit at the Natural History Museum of Los Angeles County.
This special exhibit, on view from May to September 10, 2017, focuses on mammals that have unusually developed body parts ranging from a walking whale with giant feet (Ambulocetus), bony body armor (Glyptodont) and even venomous feet (the platypus).
While some of the animals featured in the exhibit are long extinct and known only from their fossil bones, such as Repenomamus, who feasted on small dinosaurs in the Mesozoic, others, such as the Tazmanian Devil, native to Australia, are alive and well today.
The final animal shown in the exhibit is a mountain lion, a creature that has managed to survive even in populated areas like Los Angeles.
Visiting the exhibit requires a separate ticket after entering the museum. It is free to members of the museum. 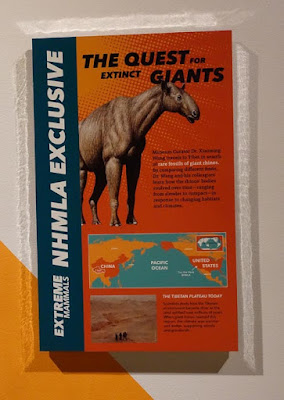