My brother Tom loves to travel and Italy is one of his (and my) favorite places. Here is his report from his most recent trip, in December 2015 and January 2016.
I recently visited Sicily, Italy for one month. I climbed Mount Etna with a group of friends after taking a cable car up the first steep stretch. Mount Etna, 10,922 feet, is the largest of the three active volcanoes in Italy. It is one of the most active volcanoes in the world and is in an almost constant state of activity. In fact, it erupted just a few weeks before I arrived in Catania.
One can see houses that have been buried by the volcanic ash on the lower slopes of the volcano.

The view from near the summit of the blue Mediterranean Sea are breathtaking, and fortunately there was not too much snow so we were able to hike easily.
Taormina is a charming coastal town just north of Catania at the base of Mount Etna. My friend and I visited the Greek Theater which is just a few blocks from the Old Town. It overlooks the sea and Mt. Etna in the background and is still used for concerts and is the site of the annual Taormina Film Festival.
Famous actors like Richard Burton and Elizabeth Taylor have received awards in this spectacular open air theater. It was built by the Romans upon the foundations of an older theater of the Greek period. What remains today dates from the second century A.D.

For our visit to Taormina and Mount Etna we stayed in Sciacca at the Torre Del Barone Resort.
Posted by five nests at 9:00 AM No comments:

As of today, there have been 150,000 views of The Intrepid Tourist! Hooray! I am thrilled that so many people have been reading the blog and thank all my viewers for their interest and enthusiasm. The viewership has been steadily growing since I launched the blog in April 2011.  I also thank all my guest posters. Many of their posts are among the most popular. Out of 257 posts so far on the blog, the ten all-time most popular are: WATER JOUSTING, Sete, France by Gwen Dandridge, Nov 12, 2012; YELLOWSTONE IN WINTER: Part 2 by Owen Floody, May 19, 2014; FAIRFIELD IOWA, Mailboxes and More by Barbara Siebenschuh, Oct 8, 2012; AKUMAL, MEXICO, Place of the Sea Turtle, Aug 5, 2013; PAPUA NEW GUINEA by Ann Stalcup, June 1, 2015; MOROCCO: Marrakech, Fes and Rabat by Kathryn Mohrman, Feb 4, 2013; STONE MOUNTAIN GEORGIA: the Mount Rushmore of the South, Aug 15, 2011; BURREN NATIONAL PARK, IRELAND by Marianne Wallace, July 22, 2013; WANDERING THROUGH SICILY, Part 1, by Gretchen Woelfle, Oct 28, 2013; and MARY ANNING’S Amazing Fossils, Feb 11, 2013.
Check them out if you haven't read them already, and look for more as The Intrepid Tourist keeps on traveling!

Posted by five nests at 2:20 PM No comments:

Several years ago, when I was researching my book about giant sea reptiles, I visited the Natural History Museum of Los Angeles County in Exposition Park to view the fossil skeleton of a mosasaur. The huge mouth and sharp teeth made me glad that I wasn't meeting this creature in real life! In the late Cretaceous Period, about 80 million years ago, these huge reptiles were the supreme predators of the sea. But, like the dinosaurs, mosasaurs became extinct 65 million years ago. We know about them from their fossil remains.

Fossils of mosasaurs have been found all over the world, including Antarctica. A recent discovery in Hungary reveals that mosasaurs lived in both freshwater and saltwater. They swam in North America’s inland sea, and their fossils are especially numerous in Kansas and South Dakota. The largest known species, Tylosaurus, grew to be up to 50 feet long and weighed up to 11 tons.

Mosasaurs were excellent swimmers and propelled themselves through the water with a side-to-side motion of their long tails. Most of them ambushed their prey, making a swift attack and catching it by surprise. Bite marks on fossil nautiloids show that they were preyed upon by sea reptiles like mosasaurs.

Mosasaurs probably ate anything they could find, including other mosasaurs. The preserved stomach contents of a Tylosaurus found in South Dakota contains the remains of a smaller mosasaur, a bird, a fish, and what may have been a shark.

Mosasaurs, along with the icthyosaurs and plesiosaurs, also extinct, were the largest reptiles ever known to swim the Earth’s oceans. They are part of the amazing diversity of life during the Dinosaur Age.

You can read more about these fascinating animals in my book Giant Sea Reptiles of the Dinosaur Age, illustrated with beautiful water color paintings by Laurie Caple. 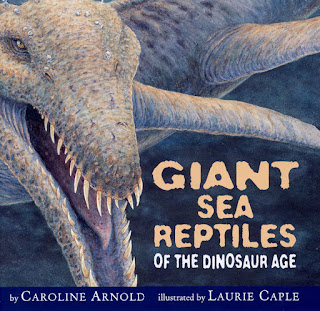 On New Year’s Day the weather was crisp and clear, so we decided to go for a walk on the trails in Eastshore State Park along San Francisco Bay. After parking at the corner of University Avenue and Frontage Road in Berkeley, we passed through the gate and walked through the Berkeley Meadow, partly fenced off for habitat restoration.
On the other side, near the Berkeley Marina, we joined the trails of Chavez Park. Along the shore, we watched coots and other water birds swimming in the bay. Ground squirrels foraged for food in the grass, popping in and out of their holes when people came too close. As we looked east over the water we could see the University of California campus in Berkeley; to the north we saw horse stables for the Golden Gate Fields race track.
One hundred years ago, the tide flats and meadows that now make up the park were part of San Francisco Bay. Gradually the shoreline changed as trash and landfill were dumped into the water. It was an ecological disaster. A community effort led to cleaning it up and turning the land into a recreational area that everyone could enjoy.
On the west side of the Chavez Park we looked out over San Francisco Bay toward the Golden Gate Bridge. There was a steady wind, perfect for sailing and kite flying. It was a beautiful day and a great way to begin the New Year.
For More Information:
Eastshore State Park (http://www.ebparks.org/parks/eastshore) extends 8.5 miles along the East Bay shoreline from the Bay Bridge to Richmond. It includes 1,854 acres of uplands and tidelands along the waterfronts of Oakland, Emeryville, Berkeley, Albany, and Richmond. Eastshore State Park parallels the most heavily traveled corridor in the East Bay, making it a highly visible, highly accessible area of parkland. The website provides directions and a map of the trails.

Note: Sylvia McLaughlin, after whom the park is named, was a remarkable woman. She recently passed away at the age of 99. You can read about her life and efforts to Save the Bay in this obituary at the Los Angeles Times.

More than one hundred years ago, the French writer, Jules Verne, wrote Twenty Thousand Leagues Under the Sea, about a fantastic voyage on a submarine called the Nautilus.  As the ship cruised the oceans of the world, it met all kinds of  strange creatures.  At one point it was suddenly attacked by a group of giant squid.  The huge animals peered into the windows with eyes the size of basketballs and wrapped their long, snake-like arms around the ship.  Everyone was terrified.  The crew battled the squid, and finally escaped.
Jules Verne’s  story is imaginary, but the giant squid that he wrote about are real. They are the world’s biggest animals without bony skeletons.  The largest known giant squid was 57 feet long--longer than a school bus.
On a recent visit to Washington, DC, I had the chance to see a preserved giant squid up close at the Smithsonian Museum of Natural History. It had been caught by fishermen trawling for blue whiting in the Bay of Biscay in July 2005.  Its arms were so long I couldn’t view the whole animal with my camera.

Giant squid live in water up to a half a mile deep and, until recently, no one had ever seen a giant squid in deep water.  In 2004, Japanese scientist Tsunemi Kubodera hung a long line with bait and a camera in a place where giant squid were known to live.  Then he waited. Suddenly, on September 30, 2004, at 9:15 a.m., a giant squid attacked the bait.  The camera clicked. This was the first time that a giant squid had been photographed in its natural home.

Giant squid are truly one of the world’s strangest and most interesting creatures, but I’d definitely much rather meet one in a museum than out in the ocean.
Posted by five nests at 9:00 AM No comments: