My friend and fellow children's book writer Ann Whitford Paul and her husband Ron recently returned from a trip to Africa, which included a trip to Botswana. Here is her report and some fantastic photos of the many birds they saw. You can find out about Ann's books at www.annwhitfordpaul.net. Her newest book, If Animals Said I  Love You, will be published in the fall.


One of the joys of traveling is the opening of your eyes to new cultures, new landscapes, new experiences, and this trip to Botswana introduced me to a world, I’d never paid much attention to before—birds, including the colorful lilac-breasted rollers seen above that perch high in trees or other high vantage places so they can spot insects, lizards, and rodents..  A young Englishman named John, who as a child had learned birding from his uncle, was an expert at sighting the tiniest birds. Here are some of my best bird photos: 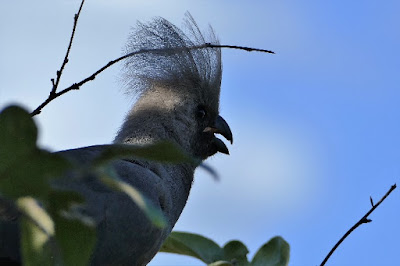 The grey go-away bird gets its name from its loud and nasal "go-away" calls. 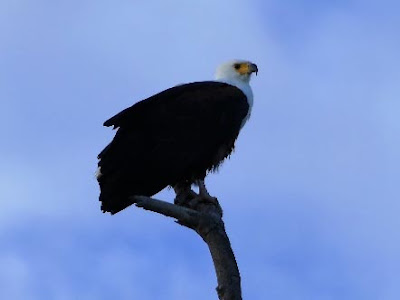 African fish eagles are found near large bodies of open water, which were abundant, thanks to the unusually heavy rains in Botswana this year. 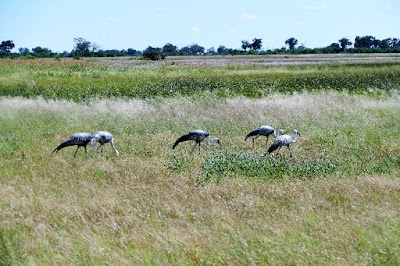 Wattled cranes love to eat the tubers of water lilies, so they forage close to streams and ponds. 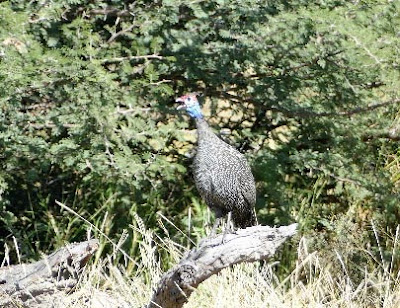 Guinea fowl are sometimes called speckled hens, and you can see why. 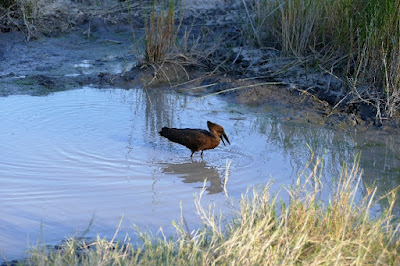 The hammerkop is a wading bird named for its unique head shape. 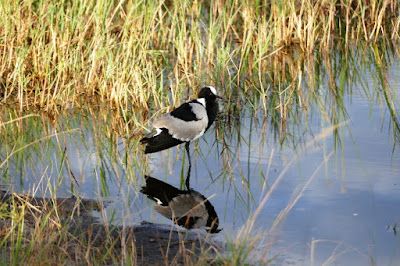 The blacksmith lapwing is a commonly seen bird throughout Botswana, but I was thrilled to get this picture with the reflection in the water. 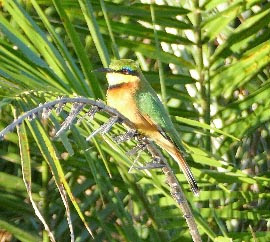 The tiny swallow-tailed bee-eater could easily be missed sitting here in the greenery. 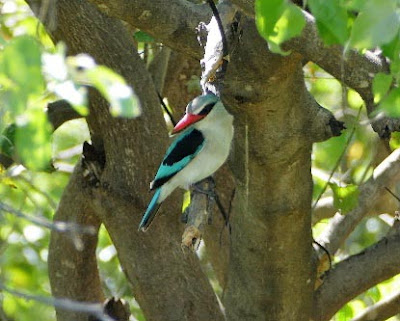 The colorful woodland kingfisher, noted for its loud trilling sound. 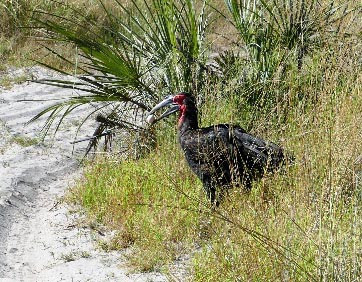 This ground hornbill grasps a stolen egg from another bird's nest and is looking forward to a delicious meal.
As with my last posting on this blog about the animals of Botswana (May 1, 2017), I was grateful for my fabulous Panasonic Lumix DMC-FZ1000k camera, which features a Leica lens and a view angle from 25 mm wide-angle to 16X optical zoom.
We stayed at Tubu Tree Camp in the Okavango Delta floodplains and Zarafa Camp located in the Selinda Reserve.  Our trip was arranged by LIVINGSTONE SAFARIS. 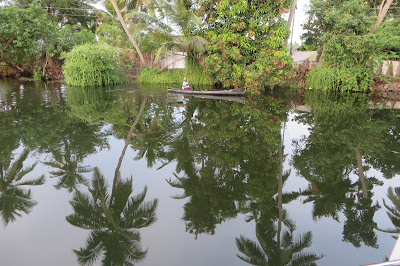 A 60km morning ride from Kochi was interrupted by another sumptuous lunch served by the sea, at the home of a chef who owned a restaurant in a nearby town. When we finally arrived at our resort on a lake, we spent the afternoon relaxing by the pool. I really appreciated the  hours we had to relax or explore each afternoon (after daily washing our cycling clothes in the bathroom sink). 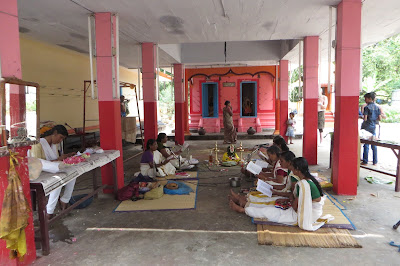 The following morning one friend and I walked to the local village temple where a ten-day festival was in progress. There were just a few people making offerings at temples, and a group of women were chanting non-stop. A man offered to show us around the complex. He was a local, but now lived in Mumbai and worked as a Bollywood cinematographer. Like many of us, he returned home for the holidays. 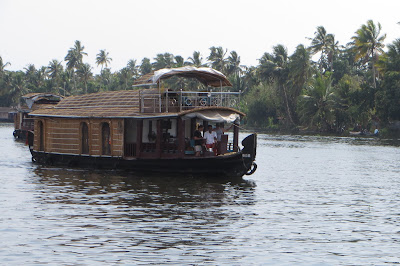 At midday we boarded our three houseboats (converted rice barges). All afternoon we cruised, at first along a wide waterway passing many sorts of boats, then along a narrow canal, passing rice paddies and small homes hugging the shore. 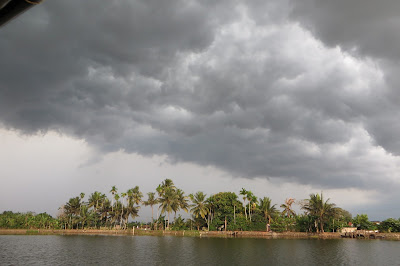 A brief tropical rainstorm blew over us, then was gone. At sunset we moored the boats together and went for a walk on the canal side path.  We watched a fisherman take off for night fishing, casting his net from a small boat. We chatted with a family living by the water. 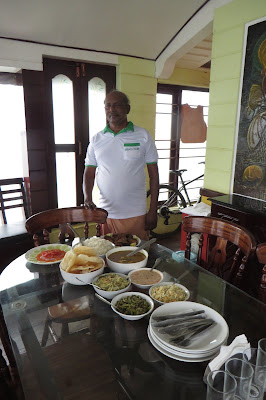 We returned to the boats for happy hour and another sumptuous dinner as night fell on this beautiful tropical landscape.

In the morning we set off on our last and longest cycling day – 90 km (55 miles). It was flat and mostly shady and never far from the ocean breeze. 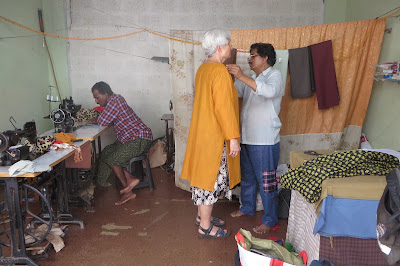 Final destination: Varkala a popular tourist destination with a sweeping beach, vast silk emporium, a tailor who made us some tunics overnight, many small shops to spend our last rupees, and cliff-top restaurants to reminisce over the last two weeks. Varkala is full of yoga schools and Ayurveda clinics for the tourists. And so we had an Ayurvedic massage which involved generous amounts of oil and delectable body work. A just reward for all those miles on the bike. 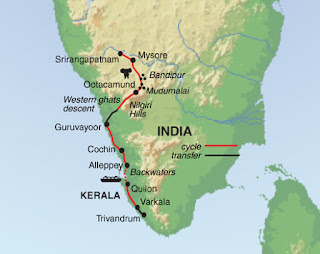 Cycling distances varied from 12-55 miles/day, averaging about 30 miles/day. Road conditions good, most rides on quiet back roads. Van support was always available for those who chose not to cycle. See www.exodustravels.com for more information on this and other tours. 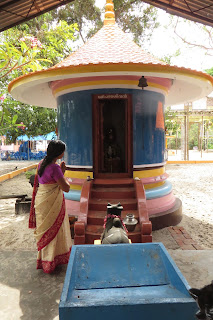 Selected bibliography:
The God of Small Things by Arundhati Roy. This 1997 Booker-prizewinning novel takes place in Kerala.
The End of Karma: Hope and Fury Among India’s Young by Somini Sengupta. A New York Times reporter, born in India and raised in the U.S., spent several years researching this 2016 book about India today.
Kim by Rudyard Kipling. Story of a street orphan and Tibetan lama in 1890s India: a spy thriller, social commentary, and poignant coming of age story.


You’ll find Kerala on the southwestern tip of the Indian sub-continent. Legend has it that St. Thomas came evangelizing in 52 CE, but historical evidence favors the Portuguese who formed an alliance with the local king and built a fort at Cochin (now called Kochi) in 1503.


The spice trade, for which Kerala is still famous, lured the Europeans and today 18% of the population is Christian, 27% Muslim, and 55% Hindu. We had three guides on our cycling trip: Joseph is Christian, Shibu is Muslim, Hari is Hindu. They are the best of friends.
When we descended the Nilgiri hills into Kerala we came to the Arabian Sea which brought cooling breezes to a tropical landscape. That afternoon we went swimming in the sea.  It was windy and choppy, but as warm as a bath. Fishermen still ply their trade in traditional wooden boats, but powered with motors, not sails.
We followed Joseph on a winding route of narrow lanes, passing grand homes built by Indians who work in the Gulf States and elsewhere. (Joseph’s wife, a nurse, has worked in Saudi Arabia for three years.) Then into the countryside, stopping for a festival parade of dancers and musicians, and on to the old harbor area of Kochi.
Cycling down narrow alleyways we reach a private home, climb to a roof terrace and are served a dozen courses of delicious Keralan specialties served on a banana leaf. I eat it all with my right hand, local style. After that we retreat to the shady garden of our British-era guest house to rest and digest!
A free day in Kochi sends me shopping with friends. We fill my extra duffel bag with carpets, wall hangings, silk tunics, and spices.
We attend a short tourist version of a Kathakali dance, arriving early to watch actors apply their elaborate colorful makeup. Traditional performances last from dusk until dawn, with many actors dramatizing familiar legends. Kathakali plays are accompanied by percussion but no words. Actions and emotions are expressed by stylized movement, hand gestures (mudras) and very expressive faces. We saw a two-person story of a failed seduction which ended badly for the heroine (offstage).
Along with the locals, we watch the sun set over the sea. Next day, we’re back on the bikes to meet our next adventure: an overnight cruise on the backwaters of Kerala.
Cycling distances on this trip varied from 12-55 miles/day, averaging about 30 miles/day. Road conditions were good, most rides were on quiet back roads. Van support was always available for those who chose not to cycle. See www.exodustravels.com for more information on this and other tours.

Selected bibliography:
The God of Small Things by Arundhati Roy. This 1997 Booker-prizewinning novel takes place in Kerala.
The End of Karma: Hope and Fury Among India’s Young by Somini Sengupta. A New York Times reporter, born in India and raised in the U.S., spent several years researching this 2016 book about India today.
Kim by Rudyard Kipling. Story of a street orphan and Tibetan lama in 1890s India: a spy thriller, social commentary, and poignant coming of age story. One of my favorite classics.