On a recent Saturday afternoon, I went with my family to Joaquin Miller Park in the Oakland hills for a hike, and to see the legacy of Joaquin Miller, the 19th century poet who spent the last years of his life in what is now the park named after him.  It was a beautiful warm day, perfect for walking the trails up the hills and through the redwoods. 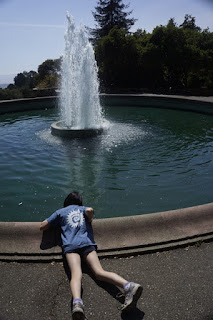 We climbed up the long stairs from the lower meadow and playground, stopping at the fountain to watch the tadpoles.  Then we continued past the waterfalls to the amphitheater, where we set out on a trail through the woods
Numerous places in the Oakland area are named after Joaquin Miller so I was curious to find out who he was.  It turns out that Joaquin Miller was the pen name Cincinnatus Heine (or Hiner) Miller (September 8, 1837 – February 17, 1913), nicknamed the "Poet of the Sierras".  Before settling in Oakland, Miller had numerous adventures, working for a time in the mining camps during the California Gold Rush and later traveling to Alaska.


The Hights (his spelling), the Oakland home Miller built at the end of his life, is currently known as the Joaquin Miller House and is part of Joaquin Miller Park. He planted the surrounding trees and built nearby his own funeral pyre and monuments dedicated to Moses, General John C. Frémont, and the poets Robert Browning and Elizabeth Barrett Browning. (The Japanese poet Yone Noguchi began his literary career while living in the cabin adjoining Millers' during the latter half of the 1890s.) The Hights was purchased by the city of Oakland in 1919.  It is now a designated California historical site.

The park features include miles of hiking, biking, and horseback riding trails, an off-leash dog area, an amphitheater, and picnicking. As we circled back on our hike we passed the herd of goats that are used as natural landscape managers.  Surrounded by a moveable fence, they eat the undergrowth and keep it under control. We ended our walk at the top of the hill where Miller had built his Monument to Moses.  From the picnic area just below the monument there was a spectacular view of San Francisco Bay.  Joaquin Miller certainly knew how to pick a good spot for his final years.
For directions and more information about the park, go to the Joaquin Miller Park website.
Posted by five nests at 8:19 AM

I love that park and all its weirdness! Joaquin Miller was a true eccentric :)