A WEEKEND TRIP TO NORMANDY: Guest Post by Mike Mayone

My nephew-in-law, Mike Mayone, who often travels for business, recently had a chance to visit Normandy in France on one of his trips. I thank him for sharing his experience with The Intrepid Tourist and providing a personal view of the place so important in the history of World War II.

With all of the focus on Normandy for the 75th reunion of D-Day, I could not pass up the chance to visit myself.  I had business in Paris and found myself with an available Saturday.

I learned that the Normandy D-Day landings involved numerous seaside towns and spanned across over 100 kilometers.  I also learned that when Airbnb says that the location you rented is in a particular town, they mean that it is reasonably close to the town.  Luckily, I figured that out before arriving at the Caen train station where I had reserved a car for my Normandy excursion. I just needed the car the night before to get to a lovely town called Bayeux where my Airbnb was located.  Little did I know that Bayeux has a deep history regarding World War II and beyond.  I ran to Hertz to pick up my rental before it closed that evening.  Yep, they decided I looked like the kind of guy that should be driving a delivery vehicle, so they gave me a Fiat diesel delivery van with a manual transmission, complete with a cage in the back that locks separately from the cab.  It wouldn’t have been so bad except that it was bright white and carried a huge Hertz logo on both sides.  Needless to say, during my travels I received a lot of funny looks.
Like the Allies in the summer of June 1944, I planned to invade Normandy, but needed more than the internet to figure out the best way to do it.  Luckily my Airbnb had two useful publications.  The first was for the D-Day Normandy Land of Liberty 75th Anniversary event, complete with maps and an itinerary if you happened to be here in June 2019.  The second was an incredible Life Magazine publication called D-Day, Remembering the Battle that Won the War, that kept me up past midnight with its wonderful photography and prose.

I learned in preparation for my D-Day landing that D-Day really simply means “Day-Day.”  Since it was a “Day” that changed the world I can see why they named it twice.  The morning of February 15 arrived and even though I was a bit sleep deprived, I got up, ate breakfast and used the map in the trusty Land of Liberty booklet to determine my plan of attack.  I decided that since Bayeux is close to the center of the five landings from D-Day, I should begin by driving to the farthest landing first. That meant that Utah Beach, about 30 kilometers from my Airbnb, would be my first visit.  As it turns out, the US was responsible for the invasion at Utah beach, so I definitely wanted to check it out.  Utah Beach is in the town of Sainte-Mere-Eglise.  This is the location where the 82nd and 101st Airborne Divisions were on the front line when the landing began at 4 AM on June 6, 1944.  Thousands of ships, vehicles and equipment pushed their way to the beach while Allied aircraft bombed German fortifications on the coast.  Walking along the vast beach, I could almost feel the guns firing from every direction. The somber February morning added to the effect.  Despite the favorable outcome of the Utah Beach landing, I couldn’t help but feel that I was blessed to live in a time where I wasn’t called to fight for my country.

My next stop was Omaha Beach.  If you only went to Utah Beach you may have thought that the Allies were invincible and would easily overcome the enemy.  A short time at the Omaha Beach landing site made it clear that wasn’t the case.  As the invasion started there, the Germans mowed down the approaching Allied forces.  Thousands were killed and wounded.  I learned later in the day that Eisenhower had no Plan B. Maybe that added to the resolve of the troops on Omaha Beach who broke through the German defenses around mid-day on June 6.  Given all the loss of life at Omaha Beach, the scene reminded me of the memorials I have seen for 9-11 in New York City.  They are special and speak to the heroic effort of those who lived and died.
Next on my route was the Normandy American Cemetery.  This is the place where the enormity of D-Day really hits you.  Walking through the grave sites of the nearly 10,000 service members placed there, you can feel the price of war.  I was on the early side so after parking my van, I walked to the visitor center, banana peel in hand (from a late morning snack), thinking I could throw it out prior to exploring the sacred site.  I should have realized they would have metal detectors and security at the entrance.  Everyone working there was very nice but I felt foolish as I put my banana peel in the tray usually used for your cell phone and wallet.  After getting beyond security I asked the woman behind the desk where I could dispose of my banana peel and she said no one in the building is allowed to have food so she wasn’t sure how to help me.  My quick thinking in asking where the Men’s Room was saved me.  It can be rare to have a moment of levity in this kind of situation but I needed it. 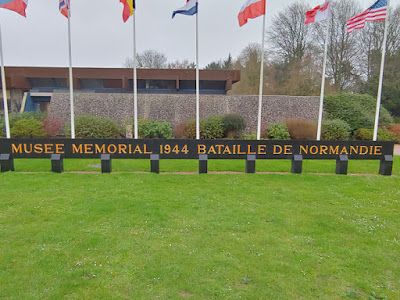 The Visitors Center was one of the best things I saw all day. They also had a 15-minute video for visitors showing how the planning, invasion and aftermath transpired.  I would have paid a steep price to take this all in but it turned out that it was one of the only free museums offered.

After that I walked all of the grounds, saw the chapel and was amazed by the painted ceiling.  As I headed back to the van, I saw what looked like a group of high school kids gathering near the memorial.  I changed course and made it to the memorial right before this Atlanta based high school band, called the Whitewater Band, played God Bless America and Taps.  It was beautiful.

It was now after noon and I needed to plan the rest of the day.  Up until this point the rain held off.  Next down the line was a British led invasion at Gold Beach.  I plugged the name into Waze and was on my way.  As I drove on a few one-lane roads and cow paths I stopped the car in the middle of the road (aka cow path) to make sure I entered everything correctly.  Waze said I did.  As it told me “you have reached your destination,” I looked to the right to see a beautiful vista of Gold Beach but it was about a mile away as the crow flies.  I decided that if I typed in the name of a monument that might get me to where I wanted to be, so I did that and it sent me a few miles down the road.  At least I was now close to the water, but I only saw a few cars and people on foot.  I parked the van, got out and joined the other walkers on a very rocky path.  After making it a half mile or so, I realized this was a very natural version of a memorial.  Not to be discouraged I decided there must be another town around Gold Beach where there would be more activity and I found the town of Arromanches.  It wasn’t that far and proved to be a great last visit for the day as the rain started to fall.
With the rain coming down I headed back to Bayeux.  I got to the Airbnb and unloaded some of my gear and decided to head to the supermarket. Along the way I visited La Cathedrale Notre-Dame de Bayeux. This cathedral goes back to the 9th century and is magnificent.  On the way back, I covered most of Bayeux and enjoyed some great sites in between the rain drops.

Hey thanks for this amazing post. Would love to read more of such blogs. You can also have a look at Book a Cruise for more information.