BACK YARD WILDLIFE, Guest Post by Karen Minkowski at The Intrepid Tourist


My friend Karen Minkowski, a dedicated wildlife watcher and keen photographer, has made the most of her Covid confinement by discovering the wealth of wildlife in her Southern California back yard. I thank her for sharing her observations and wonderful photographs with The Intrepid Tourist. 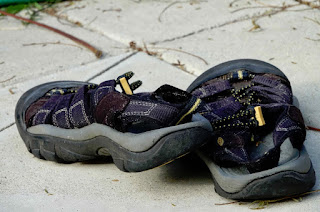 I stopped walking in LA’s Santa Monica Mountains shortly before the March lockdown was imposed and after that didn’t leave my rented home much at all. Soon, I turned my attention to our suburban backyard, a patch of boring grass partly surrounded by tall mature trees with dense foliage and low maintenance non-native plants. Like millions of other people in their homes, I discovered that my backyard was a safe place to try to connect with a tiny bit of the natural world. And over the next year I saw more wildlife in the yard than I ever expected.
The diversity of bird species that pass through the yard is impressive. Some, like this Black Phoebe, visit almost daily. They perch out in the open to ensure a straight flight path to air-borne insects or those hiding in the lawn. Many birds forage in the trees, obscured by the foliage and moving too rapidly for me to capture a clear image, either in my mind or with the camera.
Crows are common, noisy and highly visible. Here’s one about to feed a begging youngster.
The ubiquitous Eastern Fox Squirrels are an introduced (non-native) species in southern California. Their ability to thrive in fragmented habitat has led to the displacement of the Western Gray squirrel, which requires mostly undisturbed wooded or forested areas and now occupies the foothills and mountainous areas. Nonetheless, Fox Squirrels are fun to watch as they dig up edibles buried who knows when from caches they’ve dug in the ground; tumble as they chase each other across the lawn; gnaw on a fallen clothespin; or stretch along a tree limb to soak up the morning sun.
Early in the pandemic’s first spring we spotted an opossum. As I photographed it over the next half hour, it seemed more curious than wary as it watched me. I never saw it again.
In April the very vocal Hooded Orioles were likely breeding in the neighbors’ palm trees. I would see them mostly when they were foraging. They remained in the area for several weeks before migrating south.

A Jacaranda tree dominates the backyard.

It bloomed in early spring, and by May its purple blossoms were falling, providing food for at least three different families of animals: Allen’s hummingbird and honeybees drink the nectar, while squirrels ingest the whole flower.
During late spring and summer I often stood on a ladder to watch birds in the neglected backyard of the house next door. Filled with flowering weeds, it attracted seed-eaters like this young Lesser Goldfinch (above) and the House Finch (below).
One summer morning a bulldozer destroyed this productive patch of suburbia gone wild, which is now almost completely covered by a construction project to extend and enlarge the existing house.
For a few days in July a beautiful juvenile Cooper’s hawk hung out in the backyard.
In July I hung a hummingbird feeder and have enjoyed seeing Allen’s hummingbirds many times a day since then. 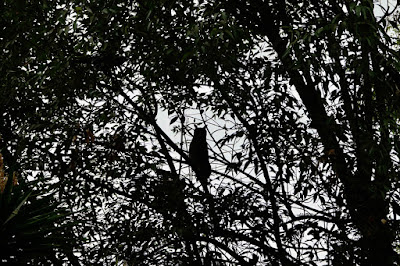 One early morning in autumn the crows were cawing relentlessly. I went outside to see what was disturbing them and glimpsed the silhouette of what resembled a large house cat high up in a tree. 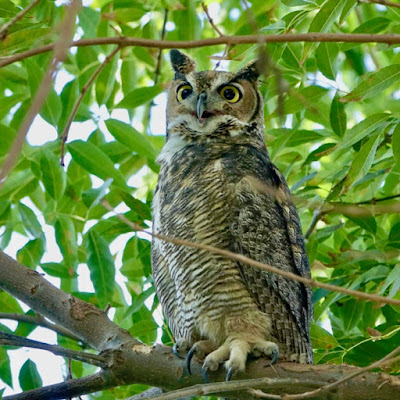 But something about the shape didn’t seem quite cat-like, and soon the increasing light revealed that we had a spectacular Great-horned Owl in our backyard. The owl rested here for a good twelve hours, rarely moving from its perch and seemingly unperturbed by the incessant vocal harassment of the crows, perched as close as six feet away. Next morning the owl was gone. Months later I still check the tree, awaiting its return.
Winter arrived… Occasionally I spot “new” bird species, like this lovely Yellow-rumped warbler. It paused just long enough for me to snap its portrait as it darted quickly in search of insects, the winter diet for many omnivorous birds.

As winter began to wane and vaccines arrived my feet were itching to walk through forests and woods. 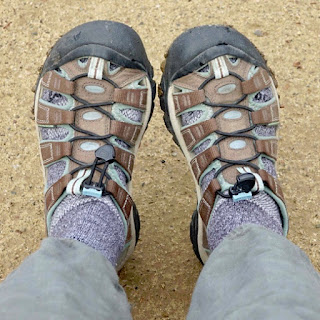 One day I put on my hiking shoes and drove to Franklin Canyon. Below are a few images of my first 2021 forays.

I still check my backyard, but enjoying much more my return to LA’s more natural environments.
Posted by five nests at 8:00 AM