ANIMALS OF HWANGE NATIONAL PARK, ZIMBABWE by Karen Minkowski at The Intrepid Tourist


52 Places to Go: Week 10
My friend Karen Minkowski spent several months in Africa in 2018-2019 and sent me some of her wonderful photos taken on a trip to Hwange National Park in Zimbabwe. Karen and I were on the same memorable trip to East Africa in 1971 that I wrote about in my post on May 16, 2011. Karen has been back to Africa many times since then, both for work and for pleasure. I thank her for sharing her terrific photos and observations of African wildlife with The Intrepid Tourist.

I've been coming to Zimbabwe almost yearly since 2009, and at the end of 2018 I returned, hoping to spend six months volunteering for a foundation, while also seeing as much wildlife and birds as possible. Not long after arriving, an unexpected opportunity came up to spend four nights at a wonderful lodge in Hwange National Park at a special "rainy season" rate. Here are some of the highlights of this visit.

The rainy season is birthing time for many antelope and gazelle  – here are some young eland from a herd of about 200, the largest eland group I've ever seen. Below, a bull, with his velvety coat.
Hwange has one of the largest elephant populations in Africa, between 49 and 60 thousand.  In the dry season elephants concentrate in and around water holes. With the rains they disperse widely, as water is everywhere, and we saw elephants only once. This young teenager mock-charged our vehicle several times before rubbing his rear on a dead tree stump. As we started to drive away, he approached our vehicle, raised his trunk and trumpeted at us, convinced he was chasing us away.
When I go to Hwange I am accustomed to joining a walking safari. I love this way of seeing wildlife, following the tracker as he picks up the spoor of a lion or rhino. There's nothing between me and the wildlife, and ... I get to walk. On this safari we viewed everything from a vehicle, but I did appreciate that we were able to approach wildlife more closely without disturbing them and saw many more animals than when on foot.

Hwange has a great diversity of ungulates (hoofed mammals.)
The sable is one of the most beautiful of all antelopes. We saw them in woodlands and grasslands.
Impala are one of Africa's most common gazelles, but I never tire of seeing these elegant, graceful animals. One afternoon we watched in amazement as a group of young impala raced round and round in large circles, seemingly for the pure joy of running and kicking their legs high in the air...they continued for quite a while.
In this season of abundant food and water, the animals seemed more relaxed than during the dry months – the need to be vigilant for predators is always present, but there's also time for fun and play and socializing. Meanwhile, the black-backed jackal (below) often hangs around on the grasslands, awaiting perhaps a lion kill? The jackal scavenges and preys opportunisticly.
While parked late one afternoon to enjoy drinks and watch the sunset. A lion begin to roar from perhaps 1/2 a mile away; soon he came into view, about 100 meters from us, still roaring. It is the best sound in the universe, soothing and comforting when you know you are in a safe place.
We continued watching as he roared his way towards one of Africa's spectacular sunsets... 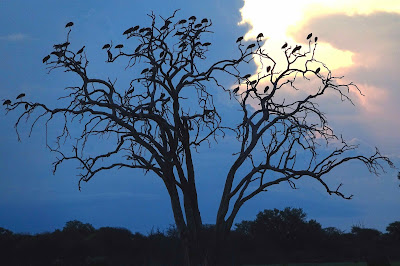