SEPTEMBER IN SARDINIA, Part I: Ancient Crossroads of the Mediterranean, by Caroline Arnold at The Intrepid Tourist

Grazing sheep, olive groves, and ancient vineyards stretched on either side of the road as we drove through the rolling Sardinian countryside.  Then, as we rounded a curve, the ruins of a huge, beehive-shaped tower loomed over the landscape.  We had arrived at Su Nuraxi, the remains of a neolithic settlement that had been a center of Sardinian life more than 3000 years ago.  Huge stone towers, called nuraghi, are unique to Sardinia and give the Bronze Age culture that built them its name. The Sardinian landscape is littered with Nuraghic ruins (more than 7,000 sites have been documented) as well as the remains of Etruscan, Greek, Carthaginian, Roman, and other civilizations that have put their stamp on the island.  The richness of Sardinia's ancient history was one of the reasons we wanted to visit.
My husband and I spent a week in Sardinia in September of 2011, visiting ancient ruins, hiking in the mountains and along the coast, going to museums, birdwatching, and enjoying the rich and delicious Sardinian cuisine.  With blue skies and comfortable temperatures (in the 70's), it had all the elements of a ideal vacation.

Cagliari, the Provincial Capital
Sardinia is the second largest island in the Mediterranean (after Sicily). We arrived in Cagliari, the capital, in the southern part of the island. After a night at the Holiday Inn, chosen because it was near the airport and theoretically easy to get to (we got hopelessly lost trying to find it), we headed for the center of town to visit the museums in the Citadella, or citadel, the old fortified part of the city at the top of the hill above the port.  The Archeology Museum in Cagliari is the largest and most complete collection of ancient artifacts on the island.  With four floors chock full of pottery, masks, clay, bronze and iron figures, jewelry, projectile points, mosaics and more, representing Sardinia from prehistoric times through the Roman period, it was the perfect introduction to the mix of cultural influences that have created Sardinia and a clue to the wealth of ancient artifacts that have been found there.  Luckily, the introductory panels in each room, which often included maps and diagrams, were in both Italian and English.
Sardinia has been part of modern Italy since 1861 and Italian is the official language. Children learn to speak Italian in school, but their first language is Sardi, a Latin-based language, but with words and word forms from earlier times and other cultures. Before the trip, I took a short course in Italian for travelers.  It helped a LOT because, with few exceptions, most people do not speak English in Sardinia.  If they do speak another language other than Sardi or Italian, it is most likely to be French. (The island of Corsica, which is French, is directly north of Sardinia.) 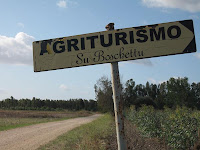 Throughout Sardinia and the Italian countryside, you see signs offering Agriturismo, which is basically a bed and breakfast stay at a working farm.  For our second night, we stayed at Su Boschettu, a typical agriturismo hotel about an hour’s drive from Cagliari, located in the midst of an olive grove.  It also offered dinner, advertising that everything on the menu was organic and locally grown.  The first course, antipasti, included the typical Sardinian green olives (perhaps from their own orchard), which have a delicious, slightly sharp, nutty taste, and the classic crisp Sardinian flat bread, carasau, brushed with olive oil, sprinkled with salt, and toasted.  (Throughout our stay in Sardinia, every meal began with olives and carasau.)
The bread and olives also came with a roasted eggplant dish, sauteed onions and cabbage, and a type of seafood ceviche.  This could have been enough, but was followed by ravioli filled with ricotta (the primi piatti) and salad with a plate of cold meats– sausage, duck and ribs–  (the secundi piatti).  Dessert was fruit, grapes and super-sweet melon, and a small cup of thick Italian coffee.  (I always asked for caffe decaffienato because, at full strength, I knew that the coffee would definitely keep me awake all night.)  We went to bed stuffed, leaving our window open to the fresh country air and perfect silence.

Su Nuraxi–A World Heritage Site
Our destination the next morning was the town of Barumini and the ancient site of Su Nuraxi, a UNESCO World Heritage site. At Su Nuraxi one can see the ruins of a large central tower, surrounded by four smaller towers and the remains of a large village.  It is the largest and most complete Nuraghic excavation in Sardinia.  From about 1500 BC onwards, villages were built around the tower-fortresses called nuraghi (Northern Sardinians call them nuraghes, Southern Sardinian call them nuraxis, plurals of nuraghe and nuraxi respectively), which were often reinforced and enlarged with battlements. The boundaries of tribal territories were guarded by smaller lookout nuraghi erected on strategic hills commanding a view of other territories.

We bought our tickets for the tour of Su Nuraxi (the only way to visit the site), and although the tour was supposed to be only in Italian, the guide generously translated everything into English for us and several other English speaking tourists.  We followed our guide up the stairs of a scaffold on the outside of the tower so we could descend the steep stone steps within the wall to the inner courtyard to enter the lower rooms and see the well. (Many nuraghi were built around wells.  Water has always been a valuable resource in Sardinia.) Only two levels of the tower remain, but originally it rose to 65 feet! Given the size of the huge stone blocks used for building, one has to marvel at the engineering.
Our ticket also got us in to several museums in Barumini.  One displayed artifacts discovered in the excavation of Su Nuraxi; another displayed farm implements and Sardinian cultural items, including the many different forms of Sardinian bread; and another explained the making and playing of a flute-like instrument called  launeddas.

Maps and Guidebooks: We relied on our Michelin map to get us around Sardinia.  You can order it online.  Our main guidebooks for sites, hotels, restaurants, etc., were the Lonely Planet Sardinia and Rough Guide Sardinia.  We also made good use of Sardinia: Car Tours and Walks by Andreas Stieglitz, which has very specific instructions for walks and driving routes.

All text and photos copyright of Caroline Arnold.