EASTER ISLAND'S GIANT STATUES: How Did They Move Them? by Caroline Arnold at The Intrepid Tourist

The first European visitor to Easter Island was a Dutch sea caption, Jacob Roggeveen, who landed on April 5, 1722.  In the tradition of his time, he named his “discovery” for the day of his arrival, which was Easter Sunday.   Today, the island is known both as Easter Island (Isla de Pascua in Spanish) and Rapa Nui, a Polynesian name given to it in the nineteenth century by Tahitian sailors.

Sixteen centuries ago, about 400 A.D., a small group of seafarers and their families sailed east across the Pacific from their island homes in central Polynesia.  Their large double canoes were filled with food, water, tools, and other things they needed to survive.  After many weeks they reached the rocky shores of a small island, later known as Easter Island.  There they established homes, planted gardens, and started a new life.  They developed a rich and complex culture that lasted for more than a thousand years.  Perhaps their most remarkable and unique accomplishment was the carving of giant stone statues called moai.  They created nearly a thousand of these stone figures, some more than three stories high, and erected hundreds of them on huge stone altars called ahu.  Even more amazing is that all this was accomplished by people whose only tools were stone, bone, and coral. 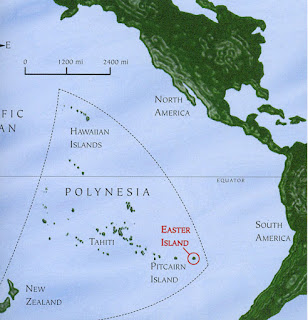 The ancient Easter Island statue makers were skilled craftsmen specially trained in the art of stone carving.  They were privileged and honored members of the community, and, according to legend, they did no other work.  They were provided with food by fishermen and farmers.  Ruins of stone houses found at Rano Raraku are believed to be the places where the sculptors lived.
Sculptors carved the moai with basalt adzes, or axlike tools called toki.  Thousands of toki litter the ground in the Rano Raraku quarry.   Basalt was also used to make axes for wood cutting as well as for fishhooks and household tools. Obsidian, a glass-like rock that is formed when lava cools rapidly, is another stone that Easter Islanders used for tools.  Obsidian is extremely hard and can be shaped into a razor-sharp cutting edge,  It was used to make cutting and scraping tools, drills, and files.  Because obsidian absorbs tiny amounts of water when it is cut, this can be measured to determine the date that the tool was made.

Sculptors carved a moai with the statue lying on its back.  After chipping the outline of the statue’s profile into the quarry wall, they made a niche around it so they could work from both sides.  People at the back side worked in a cramped space about two feet wide and five feet deep.  The sculptors began by carving the head of the moai and finished with the hips.
No two moai are exactly alike, although most follow a basic model.  All of them are designed to be standing figures with the base at about hip level.  The arms hang straight down the sides of the body, but the hands, which have elongated fingers, curve around the front of the abdomen.  Moai heads are elongated and always face forward.  The faces usually have narrow lips, large noses, and deep eye sockets below a large forehead.  The ears are usually long and sometimes have depressions in the earlobes where ornaments could be inserted.  Most moai are male although there are a few examples of female figures.

After the carving of the top, or the front half, of the moai was complete, the bottom was slowly undercut until a narrow ridge of rock was all that attached it to the quarry.  This was then cut away and the moai was lowered to the bottom of the hill with ropes.  There the figure was set upright into a hole in the ground and carving of the back was finished.  The standing statues that now litter the slopes of Rano Raraku are abandoned moai whose lower portions gradually became buried by eroding rocks and soil from above.
The real challenge in moving the finished moai was getting it from the quarry to the ahu where it would be erected.  Most of these sites were at least several miles away, an enormous distance to transport a huge object weighing many  tons.  The ruts of several roads that were used for moving statues to various parts of the island from the quarry can still be seen.
No one knows exactly how the moai were moved or whether the statues were transported lying down or standing up.  A variety of experiments have been conducted, both with real moai during the process of reconstruction, and with models, to test possible methods of transportation.

In the July 2012 issue of National Geographic, the cover article asks the same question. How did people move the moai, which, in some cases, weighed more than 80 tons?  According to local legend, the giant statues “walked” from the quarry to the altars where they were mounted.  In experiments conducted in 2011, scientists showed that as few as eighteen people could maneuver a large statue by tipping it from side to side, as if it were walking, and move it a few hundred yards.  Perhaps this is the answer.  But, no matter how the moai arrived at their destination, they will always be an impressive sight.

I visited Easter Island in 1996.  My experience there inspired my book Easter Island: Giant Stone Statues Tell of a Rich and Tragic Past (Clarion, 2000). (Now available as a Kindle book.) The picture on the left, of a detached Easter Island head, was taken in front of the Natural History Museum of Los Angeles County.  If you imagine the full-size statue, relative to my height, you can appreciate the enormous size of the Easter Island moai.

Note:  For a fictional story set on Easter Island, inspired by real events, you  might enjoy reading Easter Island:  A Novel, by Jennifer Vanderbes.  I recently read this book and it brought back many memories of my visit there.

UPDATE (November 12, 2012):  To view the latest attempt to solve the question of how the Easter Island moai were moved, you can watch the PBS Nova program The Mystery of Easter Island online. In it researchers demonstrate how the statues may have "walked" to their sites.  The program first aired on November 7, 2012.

For a picture of a finely carved moai exhibited in the British Museum, see my post London in Winter.