My friend, Kathryn Mohrman, an avid and excellent photographer, recently visited the highlands of Ethiopia on a photo tour with about a dozen other photographers.  She has graciously agreed to share some of her photos and impressions of the trip. Kathryn is a professor at Arizona State University and travels widely for her job as director of several projects with partner universities in China and Vietnam. You can see photos from her trip to Morocco last year at her 2/4/13 post on this blog.  I have known Kathryn since we were students together at Grinnell College in Iowa.
Orthodox Christians in Ethiopia celebrate Christmas in early January. In the 12th century, King Lalibela created a group of churches hewn out of rocky cliffs in the northern highlands to form a "new Jerusalem" for believers. Today many devout Ethiopian Christians make a pilgrimage to Lalibela to celebrate the birth of Christ. Lalibela is a UNESCO World Heritage site. 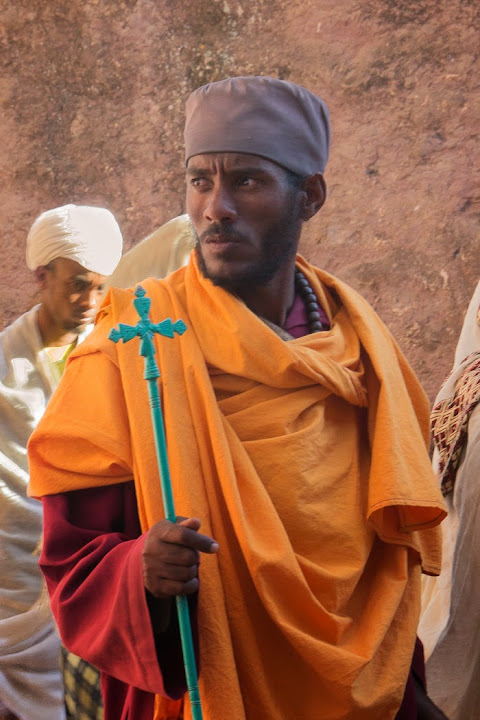 Lalibela is in the highlands of Ethiopia at about 8000 ft or 2400 m above sea level.  This was winter so it was fairly dry with no crops growing.We saw lots of livestock grazing in the fields--and walking down the roads.  In fact, I was almost run over by a bunch of galloping mules. 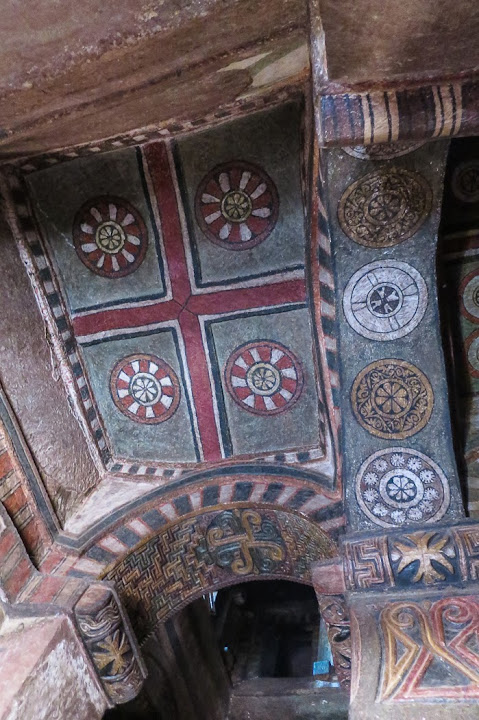 A few of the churches had frescoes painted on the ceilings; others had Bible scenes on canvas or wood as wall decorations. Passageways were carved through the rock to connect one church to the next. 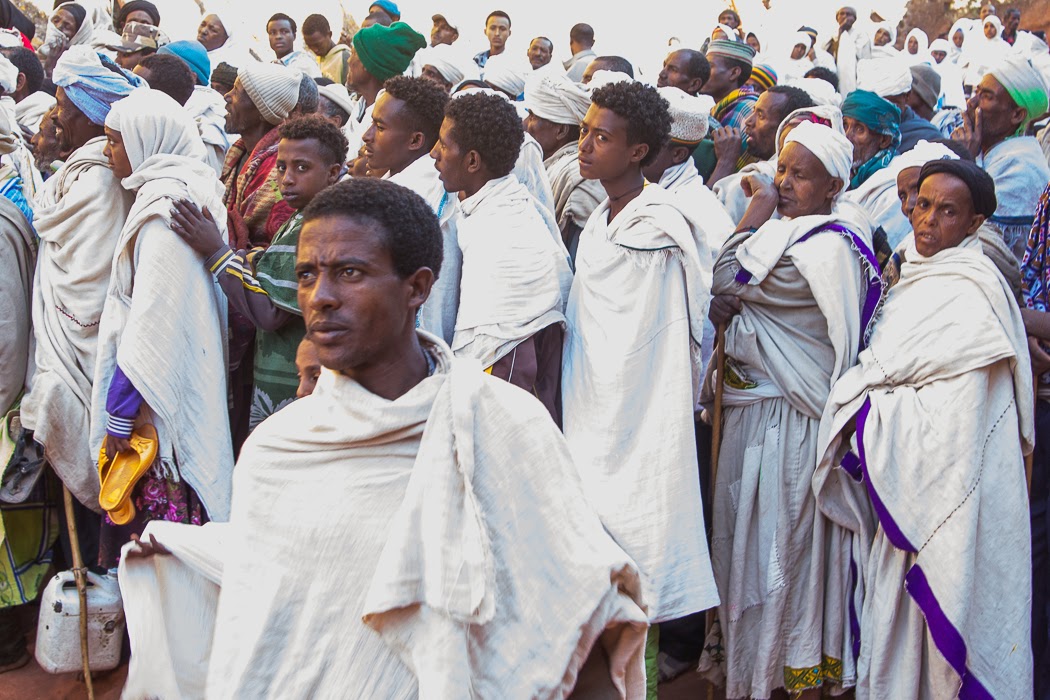 Many thousands of pilgrims crowded the little town of Lalibela.  Often they had to wait quite a while to get access to the sacred sites. We saw informal preaching, singing and dancing in the courtyards surrounding some of the churches.  People were having a good time in addition to celebrating Jesus' birth. Turbans signify priests--they are expected to marry and have families.  Monks are celibate. 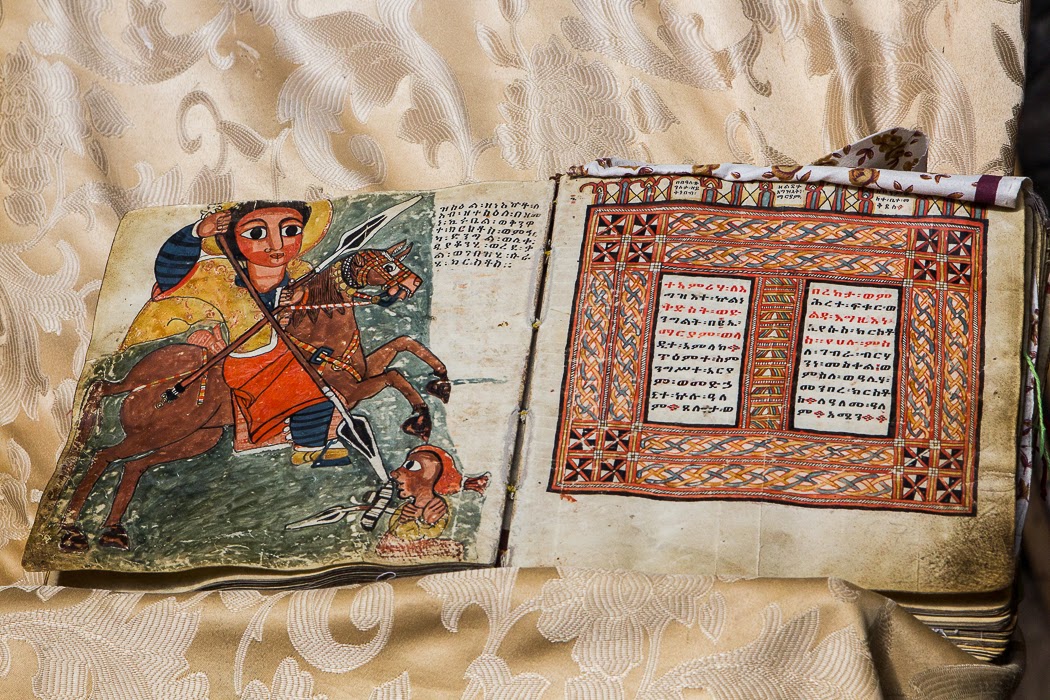 We visited a monastery where we saw a number of precious objects.  This beautiful book was created in the 9th century when Europe was in the Dark Ages.
In the past there were hermits in little caves near the churches.  No hermits today, at least not in the main areas in Lalibela.

There is a Bible verse that says "it is easier for a camel to go through the eye of a needle than for a rich person to enter the Kingdom of God!"  Historic Jerusalem had a Needle's Eye gate and this is the Lalibela version. 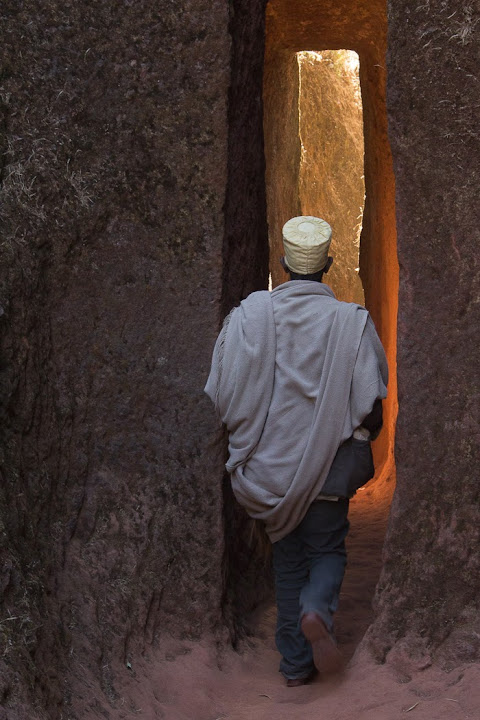 As Christmas drew near, more and more people crowded into the courtyards.  On the night of Christmas Eve, many people camped out overnight in or near the churches to be ready for dawn on Christmas Day when a huge procession culminated the celebrations. (Read more about the celebration in this Smithsonian article.) 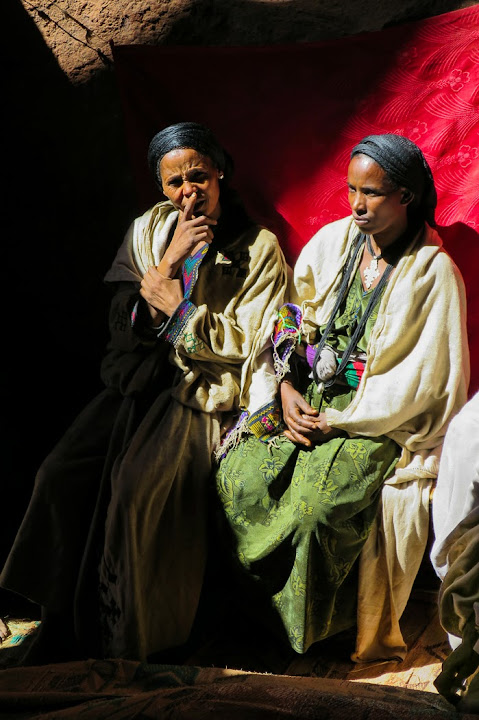 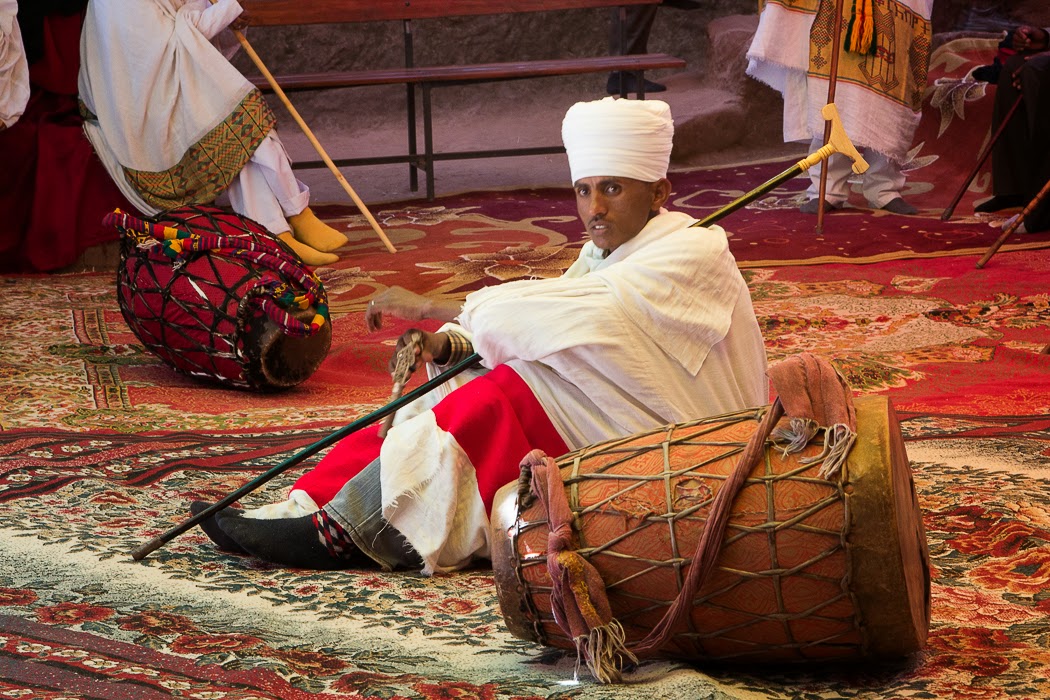 Several hours before dawn on Christmas Day, pilgrims were jockeying for position.  Many of them carried tall tapers although some used LED flashlights or their cell phones for light. Some priests, especially those who were collecting donations, wore beautiful robes and carried decorative umbrellas. 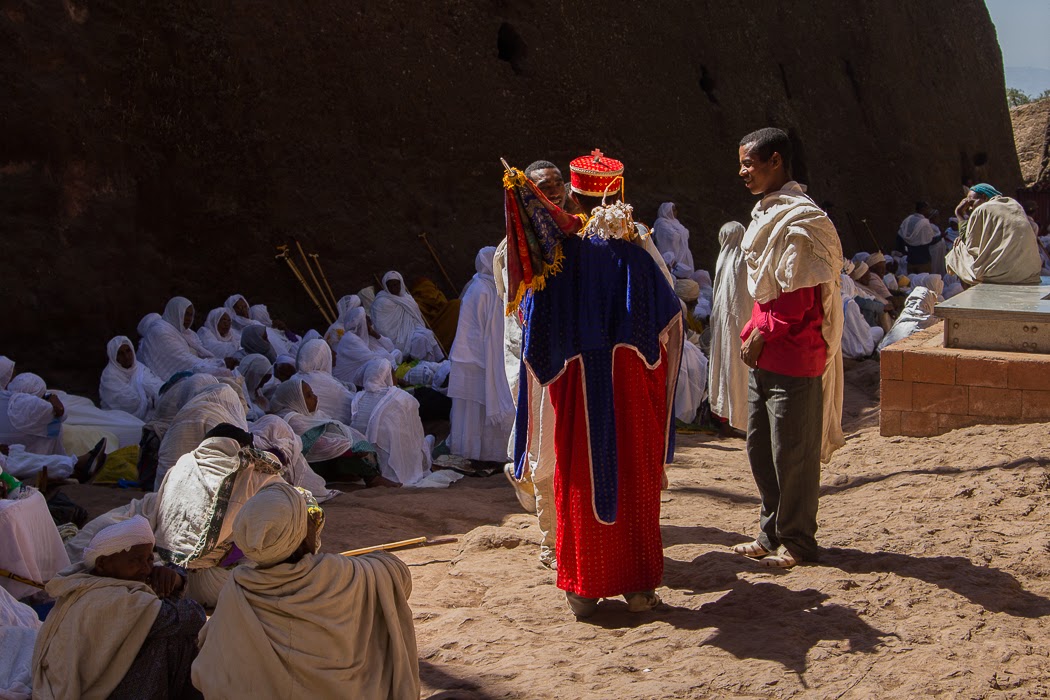 A large group of pilgrims came in several buses, complete with portable kitchen equipment.  After the final ceremony, the group gathered near my hotel for lunch before heading home.

Treks Himalaya an indoor outdoor treks and tours operative company takes you that further way to guarantee you has an unforgettable adventure Trekking in Nepal that you have been dream with Treks Himalaya is part of your choice. We have your choose of trekking for 3 days or 30 or more days it depending of your timetable, sleep under lodges or tent. We always respect our duty to constantly your holiday satisfaction in Nepal. Natures renew to Treks Himalaya one’s own self regard, to relive oneself, to realize Nepal beauty, to interact with its generous, friendly peoples are highlights of Trekking in Himalaya. Whether you are looking for a quiet gateway, a memorable Hiking in Nepal outing with a family or an exciting nature adventure. We offer you with the best progressive information and itinerary leading focused and modified as per your requirements. It is significant to memorize, though, it necessitate an enough level of physical homework and must remembers that there is also a psychosomatic assurance in walking in mountains. Acute trek is an attempt to encourage Nepal to the exterior world while striving to defend an aged tradition as well as conserve the surroundings for generation to come. Treks Himalaya specialize in organize Nepal travel activities excursion such as:- Nepal trekking, Helicopter tour, peak climbing, mountain flight, Honeymoon Tour, sightseeing tour, jungle safari, rafting, Pilgrim's Tour, Hotel booking, Air ticket, Tibet Tour, Bhutan Tour, Eco Tour, local village tour and more.

The hike through the most rugged and fascinating trails of Sagarmatha National Park, witnessing the traditional Sherpa culture in the villages of Khumbu and being in close proximity with world’s highest peak - Everest Base Camp Trek.