MEXICAN FOOD IN THE YUCATAN

On our first night home after our vacation in Mexico the joke was, “Shall we go out for Mexican?” During the week that we spent in the Yucatan we had a range of delicious meals–from home cooked to casual café fare to upscale hotel dinners–and the food bore little resemblance to what we are used to in Mexican restaurants in the U.S.

On our first evening, we walked along the beach to the Sea and Stones restaurant at the Westin Resort in Cancun, where we cooked our own dinners on hot flat stones in the middle of a large tray.  I had fish filet in a lime marinade. The novelty factor and the location–in a large open hut next to the beach–made the meal memorable.  By the time we finished the sun was setting and the beach was bathed in golden light.

En route to our next stop, Chichen Itza, we stopped for lunch in Valledolid, a traditional Spanish colonial city, eating at the Hotel el Meson del Marques at tables around an open courtyard.  I ordered chichinitas pibil, a typical Mayan pork dish cooked underground in a banana leaf–juicy and tender, something like Cuban pulled pork.  We also ordered avocado soup and a sample of small tacos Maya style for the table as an appetizer.  Altogether, we had way too much food!

We stayed overnight at the Mayaland Hotel at Chichen Itza, built in the 1930's and feeling much like a movie set.  We stayed in the Andrew Carnegie wing.  We got up early to see the ruins and returned to the hotel for a swim in the pool and lunch, stopping at a shop on the grounds to buy chocolate with chili peppers–quite delicious!  (Chocolate has its origins in Mexico.)  We ate our lunch under a palapa (grass covered shelter) by the pool and I ordered chiles rellenos, which turned out to be chiles stuffed with meat and spices, not with cheese as they are made in the U.S..

The rest of the week we were in a house on the beach near Akumal, where a home cooked meal was provided for us each evening.  The first day, after a morning swim, we went to the Turtle Bakery, a breakfast/lunch café in the center of this small beach community. It is also an ice cream shop. Afterward we walked around the tiny center of Akumal, and visited the ecology center to learn about sea turtles.
Another day we drove to Tulum (about 20 minutes away) to see the ruins (Tulum is the only Mayan city built on the ocean) and went to El Camello Jr. restaurant for lunch–a non-fancy open restaurant on the main highway south of town.  Most of us ordered ceviche, which was excellent–and way too much.  We brought home the extra and enjoyed it again the next day.

Other food highlights included buying ice cream (frozen ice pops) and a fruit smoothie at a heladeria in Tulum, lunch at Casa Cenote, a beach hotel in Tankh Tres, cutting open and eating fresh coconuts from the tree in front of our house, and shopping in the huge supermarket (Chedraui) in Tulum where we bought a dragonfruit on advice from some other tourists who told us that it was not very sweet, but tasty.  It was. 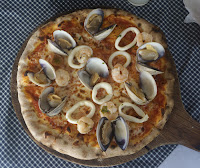 On our way back to Cancun and the airport, we stopped for lunch at Pummarola, a pizza restaurant in the center of Playa del Carmen, where we had excellent Neapolitan style pizza topped with fresh seafood. Altogether, we ate well in Mexico.
Posted by five nests at 9:00 AM