Turtles have been swimming in the oceans of the world since dinosaur times.  Only during nesting season do they come on shore, and then just for a few hours in the middle of the night.  We were lucky to see this yearly ritual on a recent vacation in the Yucatan Peninsula, whose beaches along the Caribbean coast (known as the Maya Riviera) are historic nesting sites for sea turtles. For six days, we rented a beach house near the tiny town of Akumal, a Mayan word meaning “place of the turtles”.

All along the beach near our house, just above the tide line, were hundreds of stakes with signs in Spanish and English saying Por Favor, No Tocar Nido Natural de Tortuga Marina–Please Don’t Touch, Natural Nest of Sea Turtle.On the first morning when we woke up, we saw the characteristic “tire tracks” showing that a sea turtle had visited during the night. 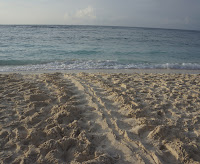 In this case, she hadn’t stayed to build a nest.  But on the next night, we got up twice to find turtles laying eggs right in front of our house and a team of volunteers monitoring the process. We were instructed to be quiet and not to use bright lights.  The monitors used small red flashlights, which allowed them to see but not disturb the turtles as they checked their health and took measurements.

One of the amazing things about sea turtles is that when they are ready to mate and lay eggs, they return to the beach where they were hatched.  Apparently sea turtles can recognize their natal beach by its smell.  Mating is done in the ocean.  Only the females come on shore.  When a female turtle is ready to lay eggs, she swims to shore, sniffs the sand, and, if it smells right, pulls herself up the beach with her large front flippers.  Once above the tide line, she uses her front flippers to dig a shallow pit for her body.  Then, using her back feet, she digs a hole about 18 inches deep.  Then, lowering her tail, she begins to drop her leathery, ping pong sized eggs.  As we watched, we could hear the plop, plop, plop, as each egg fell into the hole.  (In that nest, the monitors counted 130 eggs!  A female turtle may nest several times a season, laying about 100 eggs each time.)  After the eggs were laid, the turtle filled the nest with sand, returned to the sea and we went back to bed. 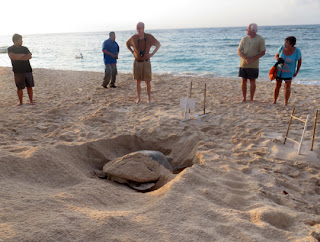 When we came out to see the second turtle of the night, the sky was getting light.  The turtle was already filling her hole and the sand was flying.  The whole process takes several hours and we had missed the first part. 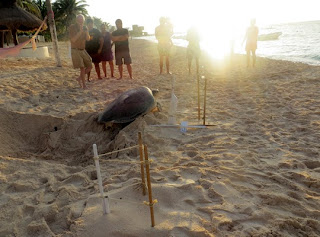 Finally, just after sunrise, the turtle seemed satisfied that the hole was covered.  She turned and heaved her huge body out of the pit. One doesn’t think of turtles being fast on land, but once out of the hole she moved with surprising speed across the sand and in less than a minute had disappeared into the surf. 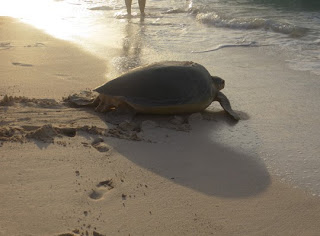 About two months after eggs are laid, the baby turtles, which are the size of a silver dollar, hatch and scramble to the sea. The nesting season for sea turtles in Mexico is May to October. We were there in the middle of July, at the end of the nesting time and the beginning of hatching time.  When we stopped at the Ecology Center in Akumal (next to the Dive Shop) to learn about turtles we were told that the eggs in one of the May nests were about to hatch that night. We could have signed up to go along with the monitors to watch. It would have been exciting to see that, but after staying up much of one night already, we passed on that opportunity.  If you visit Akumal when it isn’t nesting or hatching season, you can watch a turtle video at the Ecology center and see other informational displays. 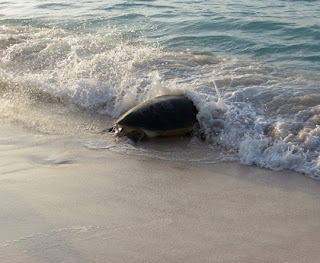 At some beaches where sea turtles used to nest, they no longer come. Sea turtles are endangered because of predation both human and animal, from housing developments along the beaches where they nest, from pollution, and from global warming. We were lucky to see sea turtles close-up in nature.  You can find out more about the sea turtles along the Caribbean Coast of Quintana Roo on the Yucatan peninsula here.

Note:  Green sea turtles live and nest all over the world including on the beaches of Viet Nam. To see a short video of the egg laying process and some amazing shots of the newly hatched turtles scuttling to the sea, click here.
Posted by five nests at 9:00 AM

Snorkeling in this amazing place!
https://www.youtube.com/watch?v=tj_OzcWUbGY&feature=youtu.be&t=20s

It´s great to see the effort of those who care for these animals. Snorkeling with the turtles let you see the results of this care. The water on the riviera maya allows you to see really deep on their habitat.

Trekking in Nepal is still the most favorite adventure holiday activity in the country. The two classic trekking routes either to Everest base camp or the Annapurna circuit are not easy and the challenge you'll face on either route will have a lasting effect. The Manaslu route trek around the world's eighth largest mountain is more remote but no less beautiful passing through stunning bamboo forests, villages filled with prayer flags and culminating with spectacular views from Larkya La. Mustang is an easier cultural trek, suitable for those with good general fitness but not necessarily any previous trekking experience. The language, culture and tradition of the Mustang region are still mostly Tibetan making this one of the most culturally interesting treks. There are shorter treks up the Langtang Valley and Helambu which are still hard work but also deeply rewarding. They generally begin in Kathmandu, leading through large grazing areas covered in flowers, dotted with stone huts used for butter making, Sherpa, Tamang villages and the homes of yak herders, right up to the Tibetan border.