EVOLUTION GOES ON EVERY DAY and Scientists Are On To It! Guest Post by Dorothy Hinshaw Patent 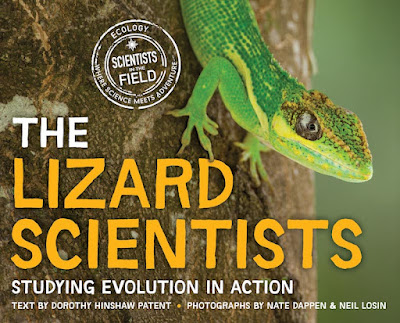 Congratulations to Dorothy Hinshaw Patent on her new book The Lizard Scientists: Studying Evolution in Action, available at Amazon and at your favorite bookstore. I have known Dorothy for many years, sharing an interest in writing about wildlife in books for children. In this guest post she shares the process of creating The Lizard Scientists, taking us behind the scenes in an author’s research.

I have a weakness for wildlife films, and I've always loved lizards. As a child growing up in Marin County California, I was allowed to have pets, more than just a dog, and lizards were high on my list.

When the International Wildlife Film Festival in my then hometown of Missoula, MT, featured a film called "Laws of the Lizard" I could hardly wait to see it.


The film chronicled the work of scientists studying Caribbean lizards in the anole family that beautifully illustrates how evolution takes place. These lizards have a very short generation time. They grow up fast, and a new generation can appear in less than a year. That way, effects from changes in the environment can show up very quickly, and scientists can follow them. As I watched, I knew I had to write about these beautiful and adaptable creatures and the scientists who study them.
Luckily, the film makers themselves, Neil Losin and Nate Dappen, are also Ph.D. scientists who studied anoles in their own research. The idea of a book about this research really appealed to them, so we were off on a joint book-creating adventure. The result after five years of research, photography, writing, and editing, is our book, The Lizard Scientists: Studying Evolution in Action (Harper Collins, Dec 13, 2022).

Neil and Nate connected me with Jonathan Losos, the “guru” of anole research, and with several other anole scientists. I learned they traveled to islands in The Bahamas to carry out their research. I always try to join scientists in person to see how they do their work, but Jonathan let me know right away that this wasn’t possible with this research—their boats are small and the islands have no docks—no room for an extra body, especially one that isn’t used to leaping like a lizard from a dingy onto a rocky shore!


Jonathan suggested I contact a postdoc in his laboratory, James Stroud. James studies anoles in Florida, where several species from the Caribbean now live. James graciously invited me to spend a few days with him during his research on anoles at the Fairchild Tropical Botanic Garden in Coral Gables, just south of Miami.

I found a weeklong rental, set up a meeting time with James, and got a ride to the park. As I awaited James, I looked around at tropical greenery and spectacular blossoms, many of them rare and treasured orchids. I loved the abundant greenery and display of brightly colored flowers.

Meanwhile, lizards already began to show themselves, and the rustling of leaves along the path indicated there were more of them than I could see. 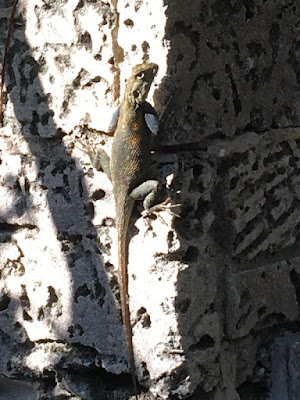 James soon arrived, accompanied by photographer Neil Losin, who lives in the Miami area.  As we strolled towards James’s research location, James snagged an anole lizard from a railing.
“This is a male crested anole. See the loose skin on his throat? This expands into what’s called a dewlap. The dewlap of each species is a different color. You can also see the enlargements on his toes. These are toepads, that help him stick to surfaces as he moves around. Anoles are the only lizards with both dewlaps and toe pads.”
James studies changes in the five species of anoles on his research island over time to see if he can spot changes in their physical features or their behavior from one generation to the next as they adapt to one another.
James does his best to capture all the anoles in his study area every six months. He puts each one into its own plastic bag and takes to his onsite laboratory.
The next day, I joined Neil on a field trip to the countryside near the city of Parkland. Some other species of anoles live there that he wanted to photograph.


On my last day, I visited the Jose Marti MAST 6-12 Academy in North Miami, a school enrolled in a special program called “Lizards on the Loose.” Sixth grade students in the school explore the ‘arboretum’ that’s on their campus, where several species of anoles make their homes.
Several different schools are in the program, so the researchers can learn where the different anole species live in the greater Miami area. The students’ findings add information that wouldn’t be known otherwise.  James said, for example, that they had found a population of one species that researchers hadn’t located before.


My Florida adventure provided lots of experience and information that helped me understand the basics of anole lizard life, but there is so much more—researchers are learning about how these lizards adapt to life in cities, how they manage to survive hurricanes, and more.

I wish I could have visited with more of these scientists who use anoles to study the details of evolution as it occurs in nature and who also love anoles for their fascinating lizardness!

With many thanks to Dorothy for sharing her research process with The Intrepid Tourist. For more about Dorothy and her books for children, go to her website www.dorothyhinshawpatent.com .

As I travel, I want to know: What do people like me do? Where do they eat? What do they like best? What are some of their favorite places, both on and off the beaten track? Like most of you, my travel was severely curtailed during the past two years due to Covid 19. As we begin to venture out again, I will go back to posting articles about current travel, to both local and more distant destinations. Many thanks to my many guest posters for expanding the breadth and scope of this blog. As always, you can use the search function to look for posts about a particular country, state or other categories.

Happy traveling, both real and virtual, in 2023!