The USS Potomac, a 165-foot vessel originally built for the Coast Guard, served as Franklin Delano Roosevelt’s Presidential yacht from 1936 to 1945.  After his death, it was sold and changed hands numerous times–one of the owners was Elvis Presley!-- and in the process made its way to San Francisco Bay. It fell into neglect and was almost sold for scrap before it was rescued by the Port of Oakland, which spearheaded a cooperative effort to restore it to its former glory. It is now a National Historic Landmark.  The yacht, furnished as it would have been in FDR’s time, is berthed at Jack London Square in the Port of Oakland and open for dockside tours and cruises on the Bay. 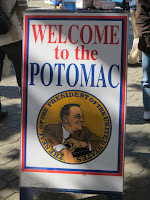 On a recent trip to Oakland I went with friends to tour the Potomac at Jack London Square. (It has been open for tours since 1990 and I am amazed that I never got around to doing this before!)  It was a beautiful sunny day, perfect to be by the water.  We went first to the Visitor Center (540 Water Street) where we bought tickets for the tour and watched a 15-minute video with background and historical photos and movies of FDR.  This included FDR’s entertaining the King and Queen of England on the “first ever” historic visit of a reigning British monarch to the United States.

Our guide then took us across the street to the dock for our tour of the boat. (All tours and maintenance of the USS Potomac is done by the non-profit volunteer organization the Potomac Association.)  Starting with the service area of the ship, our guide then took us through every part of the ship from the staterooms to the engine rooms and captains quarters. In the service quarters we saw the bunks where the sailors slept (which folded down from the walls) and a trunk packed with the required clothing.  “Standards for Uniform Storage”, a list for proper folding and placing of items, was tacked to top of the trunk.  For example:
1.  Dungaree pants - Leading edge should face front of locker with crotch on left.
3.  Undershirts - leading edge should face left with thin, thick, thick, thin folds facing front of locker.
13. Shoes - (shined and tied) Left to right.  Dress shoes, work shoes (boondockers), tennis shoes and shower slippers, with toes toward locker.
Clearly, nothing was to be left to chance.
While we went up and down the rather steep stairways between decks, we learned that FDR used a special elevator which was constructed for him inside one of the smokestacks.  It was just big enough for him and his wheelchair and was operated by hand. (The engine room was reconfigured so all smoke was routed through the other smokestack.) 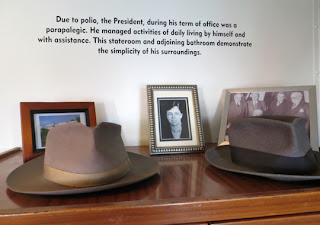 The Presidential suite was surprisingly simple and designed so that FDR could manage everything by himself.  The public areas where the President relaxed and entertained guests were gracious, but not overly ornate.  Apparently Roosevelt liked to use the yacht as a place where he could relax with friends, go fishing, and get away from the hectic life of Washington.  As we toured the yacht, photos helped us imagine FDR on one of his cruises.
Our tour was supposed to take 45 minutes but actually lasted a bit longer because we asked so many questions and our tour guide was so knowledgeable.  Someday I’d like to go back and take one of the longer trips around the Bay.

For information about tours of the USS Potomac contact the the Potomac Association.

Great post! I was lucky to be one of those friends with Caroline. You captured it perfectly!