On a windswept island at the northern tip of Scotland, thick, stone walls lie half buried by the edge of the sea.  They are the remains of Skara Brae, one of Europe's oldest known and best preserved prehistoric villages.  Five thousand years ago ancient farmers tended livestock and tilled the earth on land surrounding the village.  They also hunted wildlife and fished along the coast.  Their houses, built of sturdy stone, were clustered in a compact unit and joined along an inner passageway.  They were the heart of a close-knit agricultural community and may have been home to as many as twenty families at one time.
Art and I visited Skara Brae in the Orkney Islands in late August 1992 as part of the celebration of our twenty-fifth wedding anniversary.  We rode a train north from Edinburgh to John O’Groats and took a ferry from there to the islands.  It was an amazing trip back in time as we viewed the remains of the village where people had lived for nearly 600 years. After they left, wind blew sand from the surrounding dunes over the village and buried it.  For thousands of years Skara Brae was forgotten.

The weather in the Orkneys is often wet and windy and during our visit we experienced both sun and rain. In the winter of 1850, a series of violent storms battered the islands, pounding them with fierce waves and gale force winds.  One of these storms was so severe that it blew away the grass and sand from a high dune on land owned by William Watt, the Laird of Skaill.  (Laird is the Scottish word for lord.)  When the storm subsided, William Watt went out to inspect the damage to his property.  As he crossed the land that separated his fields from the sea, he saw that the wind and waves had exposed the remains of a long buried ancient village.  For the first time in more than forty centuries, the dwellings of Skara Brae were exposed to the open air.  As William Watt uncovered the ruins he discovered more stone walls, furniture, stone and bone tools, pottery, beads and other objects.  The sand and surrounding embankment had protected the houses and the items in them so well that many were in almost perfect condition. 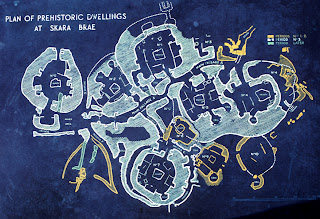 Today, visitors to Skara Brae can explore the remains of the village and see many of the ancient objects found during its excavation.  No other place in northern Europe provides such a complete picture of life in the neolithic, or new stone age.
The village of Skara Brae is a cluster of one room houses joined by covered passages.  Today these buildings are open to the sky, but in ancient times they would have been covered by low roofs.  The houses probably had rafters made of whalebone or wood which were then covered with sod and held down by ropes. (Fragments of rope made from twisted heather have been found in the midden.)
Of all the ancient sites in the Orkneys, Skara Brae is among the most remarkable.  As we peered over the village walls, it was not hard to imagine families sitting around their hearths long ago talking and eating while children played and neighbors came to visit.  With firelight dancing across the walls and winter winds roaring outside, these sturdy stone houses would have been a welcome retreat from the weather and places where people could feel safe and secure.
Skara Brae is amazing both because it is so old and because so much has been preserved.  People were living at Skara Brae before the Egyptians built their pyramids, before ancient Americans built their first cities and before the Chinese built the Great Wall.  Skara Brae is a window onto some of our most ancient history.  For those of us with roots in northern Europe, the ruins at Skara Brae provide fascinating clues to how some of our most remote ancestors may have actually lived.

You can read more about Skara Brae and the Orkney Islands in my book Stone Age Farmers Beside the Sea (Clarion, 1997).  It is out of print but available online and in libraries.  Or, you can download it to your Kindle.

Update July 21, 2014:  For information about the most recent neolithic discoveries in the Orkneys, check out the August 2014 issue of National Geographic magazine.
Posted by five nests at 9:00 AM

Great photos! It is a pity I did not manage to go to Orkney Islands after so many people recommended them. Scotland is like a prehistoric Mecca with all the Standing Stones, Burials, Forts. Definitely worth if you dare to go off the beaten track.