On a recent sunny afternoon, I visited Mountain View Cemetery in the Piedmont area of Oakland in search of the grave site of Juliet Fish Nichols, the lighthouse keeper on Angel Island from 1902 to 1914.  I had learned about her last summer on a trip to Angel Island and about her heroic efforts to keep the fog bell ringing on a very foggy night in the summer of 1906 after the devastating San Francisco earthquake. (See my post for July 30, 2012.)  After retiring, she returned to her home in Oakland where she lived until she died in 1947. She is buried in the cemetery alongside her husband, father, and mother.

I found Julia's tombstone in the family plot, high on a hill with a spectacular view and a host of impressive neighbors–Charles Crocker of Crocker Bank, Domingo Ghiradelli, the “chocolate king”, Julia Morgan, California’s first woman architect, James Folger, the coffee producer–and many more of the people who are integral to California’s history.  Luckily, we  had picked up a brochure at the park office near the entrance on our way in along with a guide to the cemetery and the graves of some of its notable residents--a kind of crib-sheet to local history.

The brochure also included a brief history of the building of the cemetery, which was designed by the well-known landscape architect Frederick Law Olmstead, the designer of Central Park in New York City. In 1863, Olmstead was in California writing a report on Yosemite in an effort to convince Congress to make it into a national park.  The city of Oakland, rapidly growing on the East Side of San Francisco Bay, had bought 220 acres of land for a cemetery in the Oakland hills and invited Olmstead to create a design for it, which he did.  His design, an elegant blending of art and nature with majestic avenues, winding roads, shaded paths and inspiring vistas, among beautiful plantings of trees and flowers, became one of the most prominent garden cemeteries in America.

On the day we visited we saw some families tending graves, but the cemetery is so large that as we drove up the hill to find Juliet Nichols grave, we encountered few people and were aware mainly of the quiet and peacefulness of the site.  When we got to the top, we had stunning views of San Francisco and the whole Bay Area.  We were there in December and the entrance of the cemetery was decorated with a large nutcracker figure for the holidays and inside they had a special display of holiday lights. 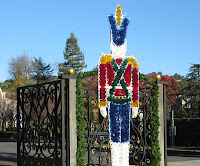 You can take free docent led tours of the cemetery at 10:00 a.m. on the second and fourth Saturdays of each month. For more information about visiting Mountain View Cemetery and learning about its historic residents go to  http://www.mountainviewcemetery.org/.
Posted by five nests at 9:00 AM