On the Thanksgiving weekend, when we were in Oakland, we enjoyed a family hike and picnic at Briones Regional Park, a large (6,117-acre) open space that is part of the East Bay Regional Park District system. It was a beautiful sunny day, perfect to be outdoors.

Briones Regional Park consists of picnic and play areas as well as trails traversing rolling hills and oak woodlands. From Oakland, we exited the 24 Freeway at Orinda, then drove through a series of hills before turning in at the Bear Creek staging area. We found the parking lots nearly filled but we didn't see very many people. We wore masks and the trails are wide enough that when we did pass other hikers, we could do so at a distance. 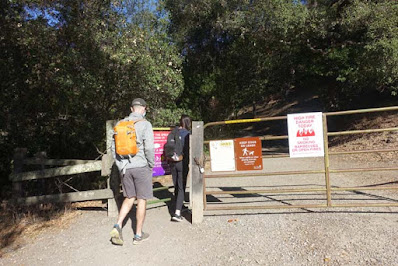 Signs at the entrance to the trails inform hikers that the park is a dual use area–both for people and for cattle grazing. In fact, shortly after we began our hike we encountered a cow and her calf at the side of the trail, but they paid little attention to us as we walked by.

We followed the mostly level trail to the Maud Whalen fenced picnic area, where we had our lunch. The trees at the edge of the field were full of noisy woodpeckers and we watched them dart out into the air, apparently catching insects, before returning to the trees. High overhead a pair of hawks soared on the updrafts.

Two years ago we did a similar hike at Briones in early summer, when wildflowers were in bloom and birds were nesting. On this trip in late fall, the grass had turned golden brown and flowers gone to seed.
At several places in the park we noticed bare trees covered with large round fruits, suspended like Christmas balls. Those that had fallen to the ground had cracked open, revealing a nut-like interior. We wondered why wild animals hadn’t eaten them. Then I found out why–they are poisonous. The trees are California buckeyes (Aesculus californica). Native American tribes, including the Pomo, Yokut, and Luiseño, used the poisonous nuts and seeds to stupefy schools of fish in small streams to make them easier to catch. The bark, leaves, and fruits contain the neurotoxic glycoside aesculin, which causes hemolysis of red blood cells. Buckeye wood also makes a good fireboard for a bow drill or hand drill. Native groups occasionally used the plant as a food supply; after boiling and leaching the toxin out of the seeds or nut meats for several days, they could be ground into a flour or meal similar to that made from acorns.

Our hike was not long--a total of a little over two miles. But it was refreshing to be in the open air and get some exercise at a time when most of us are confined to our homes day after day.

Thanks to Matt Arnold for the first and fourth photos.