From 1943 to 1970 the aircraft carrier USS Hornet sailed the oceans of the world. It now sits at a dock in Alameda, California, in San Francisco Bay, at the former Naval Air Station and is open to the public. When our family was in Oakland several months ago, we decided to make a visit.
The former Naval Air Station (NAS) Alameda, which occupies 878 acres on the eastern point of Alameda, was once one of the busiest facilities in the country. When it closed in 1997, the USS Hornet was given to the air station to be used as a museum and became the USS Hornet Museum.  After parking our car we climbed the gangway and purchased our tickets at the desk just inside the entrance. We then set off on a self-guided tour. (Docent led tours are also available.)
The carrier is enormous--a virtual small floating city. When the ship was in use, the upper deck was the landing strip for planes to land and take off.
As we walked among the planes we had a spectacular view of the the East Bay (Oakland and Berkeley) on one side and San Francisco on the other. We chatted with a volunteer, a former naval officer, now retired, who served on a similar aircraft carrier in the Pacific. His job, he told us, had been to rescue pilots who went overboard in the extremely rare case when a plane overran the runway. Luckily, this almost never happened, but they had to practice regularly to be ready if it did. 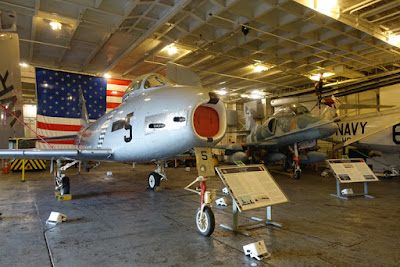 The enormous space in the middle of the ship (the level where we entered) was used as a hanger and now houses displays of planes and other memorabilia.
Below decks are a labyrinth of rooms where sailors worked, slept, ate, did laundry, went to the doctor, collected mail and relaxed. As we made our way through the narrow hallways and peered into the rooms, we had to be sure to keep our bearings so we wouldn’t get lost.
Sailors on the USS Hornet visited ports around the world including Hong Kong, Guam, Tokyo, Manila, Lisbon and Naples. Sailors who had liberty were allowed to disembark and explore the area. They often returned to the ship with a collection of photographs and souvenirs from their trip.
In the hanger section of the ship one can see the Apollo Block 1 Command Module (CM-011) that was used for the unmanned space mission on August 26th, 1966. The mission lasted 90 minutes and CM-011 reached an altitude of 100 kilometers and traveled two thirds of the way around the Earth. USS Hornet served as the recovery ship for CM-011. The Command Module was recovered off Wake Island, 1 hour and 33 minutes after liftoff.
A flight simulator is also on display in the central portion of the ship. Several in our group bought tickets to take a ride and experience what it might have been like to be a pilot.
The USS Hornet had a long history during and after World War II. This report includes just a few highlights from our visit. We'll have to go back someday.
The island of Alameda is located on the eastern shore of San Francisco Bay, adjacent to Oakland and reachable via a short tunnel from Jack London Square or via several bridges. As you wind your way through the large former base, now being converted to civilian use, signs point the way to the USS Hornet.
The USS Hornet Museum is open every day of the year except New Year's, Christmas and Thanksgiving. For more information, ticket prices, and to plan your visit, click HERE.
Posted by five nests at 8:00 AM

Thanks for sharing such kind of important and valuable information. Keep posting this kind of travel related blogs with wide variety of knowledge. We really appreciate all of your efforts. Kindly contact Ghum India Ghum for the best domestic as well as international holidays deals. One of the leading travel Agency in Delhi .
travel Agents in Delhi