Berlin, Germany, GARDENS OF THE WORLD

On our recent trip to Europe we spent a few days in Berlin where we visited friends and Art attended a conference. We stayed in the Melia Hotel on Friedrichstrasse in the former East Berlin, not far from the Brandenburg Gate and Museum Island.
Visits to Berlin always bring back memories for Art, who was an exchange student there in 1961, the year the Wall went up and this part of the city was off limits. What was a divided city then, isolated from what was then West Germany, is now a bustling metropolis, filled with arts and culture, and a spectacular mix of old and new.
On our trips to Berlin we always look forward to our favorite German foods–apple strudel, currywurst, fresh bread in the morning–and returning to favorite places. But we also like to have new experiences. One afternoon while Art was at his meetings a friend took me to the Gardens of the World (Die Garten der Welt), a large park (21 acres) on the outskirts of the city with gardens built in various international styles. 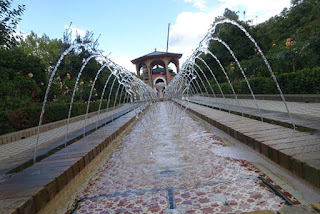 We went first to the Oriental garden with its fruit trees, fountains, and colorful ceramic tiles reminiscent of the Alhambra in southern Spain. From there we walked to the Chinese Garden, constructed around a large pond filled with lily pads and reached by a zigzag bridge. We watched swans dipping their heads to feed underwater while we drank tea and ate Chinese snacks in the lovely outdoor tea garden.
As we followed the path through the park we stopped at the English maze--where we were unsuccessful at finding the center–and then visited the Korean garden, Japanese Zen garden, and the Christian garden, a peaceful enclave surrounded by a metal arbor created from passages of scripture.

The afternoon of our visit to the Gardens of the World was cool, but not rainy despite the forecast, and, as it was midweek, few other people were there. Many of them appeared to be gardening enthusiasts, inspecting the plants and reading their meticulously written labels. The park also has a nice gift shop.

Address: Eisenacher Strasse 99, 12685 Berlin, Germany
Phone Number: +49 (0) 30 700 906 699
We paid an entrance fee of 5 euros and a parking fee of 2 euros.
Parts of the garden are under construction as it continues to expand.
For current information and more about the garden click HERE.

As I travel, I want to know: When people like me go there, What do they do? Where do they eat? What do they like best? What are some of their favorite places, both on and off the beaten track? Here is a random selection of MY travel experiences, both current and from the past--and a few from my friends and family. (All links are up-to-date.) Perhaps they will answer some of YOUR burning questions or inspire your next trip.
To find posts about a particular state or country, go to the labels at the lower left of this page and click on your choice, or you can use the search bar.
Enjoy!