My friend Gwen Dandridge sent me this post about the amazing jousting matches in the canals of Sete, France, that she and her husband went to see when they were living in France for several months in 2005.  I had never heard of Sete, and now I want to visit!  Gwen has many talents ranging from fantasy writing to gardening to Morris dancing.  You can find out more about her at her blog.

Gwen's Post:
When my husband and I lived in Montpelier, France, we set out to see all the small events that make France unique. We heard of a contest nearby in Sete that had been running since medieval times and knew that we had to attend.  Sete is a small city on the coast of the Mediterranean. It is an island city in the manner of Venice, but with cars. Waterways divide the city and small  shops line the canals. But where Venice feels tight with millions of little  alleyways, Sete feels open and expansive. Each year between late spring and early fall they host a series of water jousting contests.

We traveled to Sete by train, a simple twenty minute ride from Montpelier. The sky was startlingly  blue and the colors of the town were picture perfect--red and blue and white.  At a patisserie with gorgeous pastries, we each bought one to try. We found the  festival with almost no trouble and got a seat on the bleachers to watch the  show. They have been having this festival for hundreds of years. On the program  they listed the winners of the joust for each year and the dates went back to  the 1600’s. 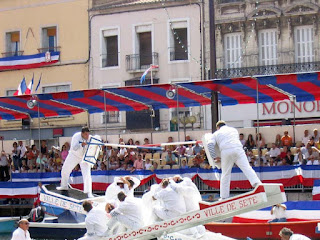 The contest is the following:  There are two teams, blue and red. Each has a boat with ten rowers and two  musicians, an oboeist, and a drummer. The dress code is a fisherman-type long  sleeved tee shirt with stripes, red for the red boat and blue stripes for the  blue boat. Over that is a white shirt with short sleeves. White pants and white  shoes complete the outfit.

There is a long ramp at the end of each boat with ladder-like steps. At each of the four  rungs two men usually sit waiting for their turn to joust. At the top is a  platform, just big enough for one man to stand braced with feet apart. This lone jouster holds a wooden shield and a long lance with three metal prongs on the end. 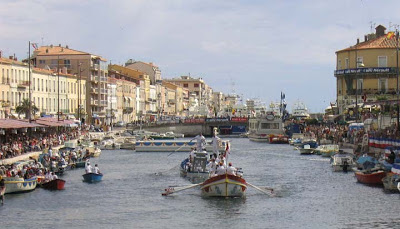 The boats turn to face each other.  Then the rowers row as fast as they can toward the  opponent boat with one guy on each boat standing with his lance. As the boats approach, the jousters  level their lances at one another (just like in the horseback riding version) and attempt to knock the other into the water. Sometimes they both stay standing, sometimes they both end up in the water, but typically one is knocked off by the other. The guys on the ramps below duck to avoid flailing  lances and falling jousters. Quickly, another smaller boat (with a motor)  spins out to drag the waterlogged loser out of the water. The jousting boats return to their respective ends of the canal, circle about, and start over.

Each jouster gets three tries to knock his opponent into the water.  If he is victorious and doesn’t land in the water, he goes down the ladder and the next person moves up  to his position. As the people on the rungs finish their contest, a boat putters in and brings in more contestants to sit waiting for their turn “at  bat” as it were.

It looks sort of “la de da” jolly, until you realize how much momentum is behind each lance. Usually they strike, someone gets knocked off  balance, shields and lances flailing around, and then maybe one person ends up in the  water. Once though, the jousters both struck completely straight and true, and  one guy just flew backwards, fully airborne, before crashing into the water  below. That day, the guy on Bateau bleu was the one to go flying. Meanwhile a larger band played between the actual jousts.

Josh loved it and would have enjoyed trying it himself, but the training for this starts early in the year and beyond his reach. While I’m sure it would have been cool to see his name on the roster, I was ultimately relieved not to have my husband smacked in the chest with that much force. Perhaps another year.

i must say that you have an amazing sense of writing and executing your posts!! good job!! Keep it up!
garden ornaments

This is such an informative post. You have a lot of really great points. I wish I had this post as a resource when I started blogging.
Amer.