My friend Barbara Siebenschuh, classmate (Grinnell College) and roommate (University of Iowa), who still lives in Iowa City, recently visited the small town (population 9464) of Fairfield, Iowa, in the southeast corner of Iowa, about 1 ½ hours from Iowa City.  I have never been to Fairfield, but I was charmed by her description of the town and Maharishi University on the outskirts.  I think you will enjoy reading her report.

I went with my friend to Fairfield, Iowa, to retrieve a jacket she had left in a shop there the week before. I had never been to Fairfield, Iowa. It was a beautiful day and not windy. The jacket was waiting for her at the Blue Fish specialty clothing store. We eventually walked the whole square. Many shops had special hours so not all shops were even open, or opened later. I found a neat little kitchen store I liked very much. In the back, it was a yarn store as well. The clerk there told us to look at some mosaics in an alley nearby. We did and they were very ambitious and colorful.

Also, there had been a town enterprise to design mailboxes and a few were still up. They were really neat, especially when one thinks they have to hold up to the elements. Perhaps, Fairfield had seen a large grasshopper population lately because one of the boxes had a jaunty grasshopper and a message to be rid of such, suggesting I guess, to mail them out of town. My favorite mailbox was a Trojan pony because of the construction--the wooden tail served as notification that there was mail. There was also an over-the-top fruit and baubles mailbox which seemed like Carmen Miranda had commissioned it. Great creativity!


We ate at a vegetarian place called "Revelations" and I had a faux BLT with protein strip colored like bacon to provide some crunchiness. We sat among a whole room, one of many, of used books for sale. Nice place.
More shops were tried or peered into. By the time we got back around the square to the car, a Aryuvedic store was open with lots of expensive looking statues. We did not go in as we could see a lot of it from the doorway.  I was charmed by the shops on the square–many little features that left Iowa City years ago. 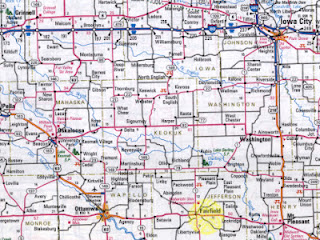 We had gotten directions to hit Highway 1 (we had come another way) in order to see Maharishi University as we drove out of town. We got on Highway 1 but were not prepared for the sprawling huge size of the Maharishi complex.  We saw the student union but we also saw unmarked buildings (huge) and signs farther down for Vedic City. The architectural hallmark seemed to be swirling cones atop yellow pinkish buildings that showed nothing to the outside. It was almost like the window panes were opaque; no signage, well, one: visitors park and go in the building here: no lawn features. Wow. Well, I have seen Maharishi in part-at least from the outside.
We saw little traffic on our entire trip and the outstanding impression was that this area around Fairfield had been hard hit by the drought. Many trees and bushes were dead looking. I doubt they will survive the winter winds.

With thanks to Dania De Bortoli of the Fairfield 1st Fridays Art Walk for photos of the mailboxes and to Barb's friend Kathleen for the photos of the murals.